ExxonMobil Refuses to Panic on Climate

Last fall former Vice President Al Gore, along with David Blood, a senior partner at Gore’s Generation Investment Management, contributed an editorial to The Wall Street Journal called The Coming Carbon Asset Bubble. I covered this in some detail in A Blood-and-Gore Forecast for Carbon, but the gist of the argument follows.

The 2009 Copenhagen Accord stipulated that in order to avoid the worst impacts of climate change, the maximum global temperature rise should be below 2°C of warming from preindustrial times. In order to stay below that number, computer models indicate that at least two-thirds of fossil fuel reserves must not be allowed to release carbon into the atmosphere. Since almost all of the fossil fuels we currently use do end up as carbon dioxide in the atmosphere that would most likely entail leaving them in the ground, which would create “stranded carbon assets” for fossil fuel companies.

This is obviously an item of significant interest for fossil fuel companies and shareholders. In fact, in February several investor groups filed shareholder resolutions with 10 fossil fuel companies, including ExxonMobil (NYSE: XOM), Chevron (NYSE: CVX), Devon (NYSE: DVN), Kinder Morgan (NYSE: KMI) and Peabody Energy (NYSE: BTU), seeking an assessment of the possibility that some of their fossil fuel reserves may become stranded under a low-carbon scenario.

ExxonMobil rose to the challenge and responded to these resolutions with a 30-page report. The company indicated its investment decisions are based on a comprehensive annual analysis of the global outlook for energy that is consistent with the International Energy Agency’s (IEA) World Energy Outlook and the US Energy Information Administration’s (EIA) Annual Energy Outlook. In other words, investment decisions are not just based on the world according to ExxonMobil, but on the world energy outlook from the US government and the IEA, which represents 28 member countries (including the US).

The company further noted that for several years its annual Outlook for Energy, which forecasts energy demand through the year 2040, has accounted for the prospect of policies regulating greenhouse gas (GHG) emissions. The report argues that ExxonMobil takes the threat of climate change seriously, a point reiterated by ExxonMobil government affairs chief Ken Cohen in an Associated Press interview following the paper’s release. “We know enough based on the research and science that the risk (of climate change) is real and appropriate steps should be taken to address that risk,” Cohen said.

But he followed that with a “but” that essentially summed up the reasoning in the report: “But given the essential role that energy plays in everyone’s lives, those steps need to be taken in context with other realities we face, including lifting much of the world’s population out of poverty.”

Several of the groups that sought the response expressed disappointment in ExxonMobil’s report. While acknowledging that it was a step in the right direction, Natasha Lamb, director of equity research at Arjuna Capital, criticized its gradualist approach: “The question is not whether or not we’ll face the low carbon standard, but whether they are prepared to address it. We need to know what’s at stake. But at least now investors know that Exxon is not addressing the low carbon scenario and placing investor capital at risk.”

ExxonMobil’s fossil fuel reserves are unlikely to be stranded, primarily because they’re made up of oil and natural gas. In my previous article on this topic, I referenced a 2012 paper by Neil C. Swart and Andrew J. Weaver from the University of Victoria that was published in Nature Climate Change. In that paper is a graphic that shows the relative potential warming contributions of various fossil fuel resources: 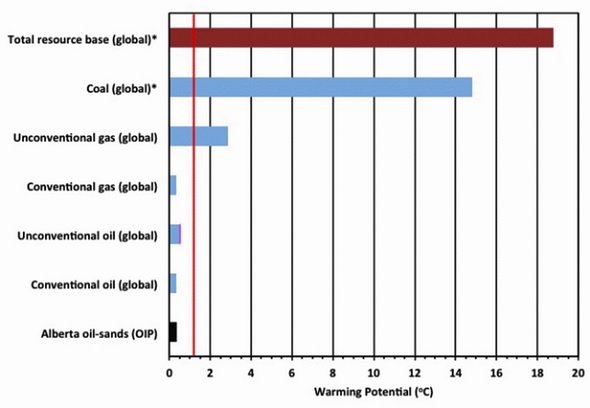 First of all, note that this is the entire global resource of fossil fuels, and not the much smaller subset classified as reserves. The difference is that resource covers all the fossil fuels that are known to exist, and reserves are the fraction that can be technically and economically produced.

A common response to this line of reasoning is that every little bit counts. This is true, technically, but not even the staunchest opponents of fossil fuels apply it literally. Every single person that pushed for this resolution uses fossil fuels. How can they justify it? They justify by reasoning that their small contribution isn’t significant, and they push for larger changes. In other words, “every little bit” is relative to the benefit individuals derive from what they are using. Yes, my little bit counts, but give up my car and never fly? For most people this is going to be giving up too much for an impact that would be too small to measure.

And as my friend Geoffrey Styles points out in his take on the issue, ExxonMobil does model “its projects and acquisitions at proxy costs of up to $80/ton of CO2, compared to current levels of $8-10/ton in the EU’s Emission Trading System.” And even though they believe governments are unlikely to adopt such high carbon prices, even 10 times the current value of carbon dioxide emissions in the EU is unlikely to strand Exxon’s petroleum assets because there just isn’t a good substitute.

In my view, the relative benefit of future oil consumption is far greater than the relative benefit of future coal consumption. Why? Because oil has fewer potential substitutes. There are many different ways of producing electricity at a price that is competitive with coal, but with lower emission of carbon dioxide. In a low carbon emission scenario, it makes far more sense to go after coal than it does oil. Coal is a much larger relative contributor, and there are potential replacements.