Shelter Your Investment Income with MLPs

Editor’s Note: As a Tax Day special for this edition of Utility & Income, we’ve given our colleagues at our sister publication, MLP Profits, an opportunity to explain the basics of master limited partnerships (MLP), which offer high-yielding, tax-deferred payouts.

While Utility Forecaster includes a number of MLPs in our Portfolios as well as in How They Rate, our coverage of the MLP space is not exhaustive.

For investors interested in thorough coverage of this area, MLP Profits provides three portfolios (Conservative, Growth and Aggressive), as well as a monthly Sector Spotlight feature, which analyzes the top MLPs operating in a particular niche, and two Best Buys every month.

The first MLP was formed by Apache Oil Company in 1981. In 1987, Congress legislated the rules for publicly traded partnerships, which required that at least 90 percent of an MLP’s income must come from qualified sources, such as real estate or natural resources. Section 613 of the tax code requires qualifying energy sources to be depletable resources or their derivatives such as crude oil, petroleum products, natural gas and coal.

There are some important differences between investing in MLPs and investing in a corporation. An MLP issues units rather than shares, and these also trade on major stock exchanges and can go up or down in value.

But the key difference is in tax rules. MLPs aren’t subject to the corporate income tax, instead passing profits directly to unitholders in the form of distributions. This arrangement avoids the double taxation of corporate income and dividends affecting traditional corporations and their shareholders and, all things being equal, should deliver more money to unitholders. As a result, MLPs tend to trade at a premium to corporations in similar businesses.

But the distributions from MLPs aren’t immediately fully taxed either. Because of the depreciation allowance, as much as 80 percent to 90 percent of a typical MLP’s distribution can be classified a “return of capital” and thus not taxable when received. Instead, returns of capital reduce the cost basis of an investment in the MLP.

The rest of the distribution–typically 10 percent to 20 percent–is taxed at the recipient’s income tax rate. But being able to defer the rest of the tax until the investment is sold is an advantage, since the income can be reinvested to generate compound returns that could more than pay for the eventual tax bill.

When you ultimately sell the units or the cost basis drops to zero, a portion of the capital gain is taxed at the special long-term capital gains tax rate, and the remainder will be taxed at your normal income tax rate.

MLPs issue Schedule K-1 forms instead of the 1099s you may receive from a corporation, and the K-1 will reflect your share of the taxable income. Partnerships are not required to release tax information until the April 15 following the calendar year-end. Most K-1s are issued between late February and early April, which could certainly delay a tax return. You may not have to file for an extension, but you also may not be able to file before March.

The other thing to understand about MLPs and taxes is that the K-1 package will include a state schedule. This schedule details the MLP’s share of income or loss attributed to each state in which it operates. For example, a pipeline may cut across five states and have reportable income in each state. You may be required to file state tax returns for each of these states, which means your tax reporting may be more complex and costlier, though most individual investors will fall well under the threshold for having to do so.

Are MLPs Right for Your Portfolio?

MLPs are primarily for investors seeking stable, tax-advantaged income. However, there are numerous exceptions to this idealized definition.

Some MLPs don’t provide stable income. There are many variable distribution MLPs, particularly in refining and fertilizer manufacture. These are highly cyclical industries given their exposure to commodity prices. They could pay out an annualized 20 percent yield one quarter and then suspend the distribution three months later should profits dry up.

Most MLPs provide midstream energy services. In fact, the 10 largest MLPs by market capitalization  all engage in oil and gas gathering, storage, and/or transportation. This sector is characterized by lower volatility and throws off income more reliably than many of the niche MLPs, and as a result draws more conservative income-seeking investors. 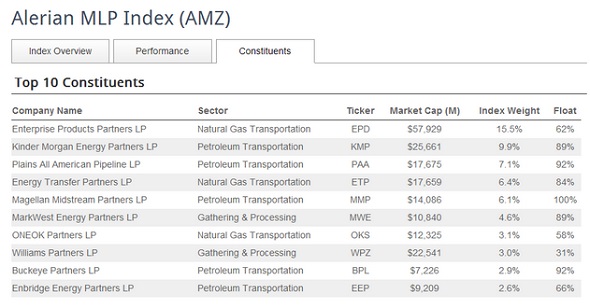 The Alerian MLP Index is a composite of the 50 most prominent MLPs, and can provide a snapshot of a “typical” midstream MLP. Over the past year, the index has gained 5.8 percent, while the annual yield averaged 6.3 percent, for a total return of 12.1 percent.

We can use those numbers to examine the implications for an investor who is seeking a stable source of retirement income. If we had invested $100,000 in an MLP whose performance was identical to the Alerian MLP index, the size of the investment would have increased to $105,800, while returning $6,300 back to the investor as income.

An investor selling the entire position after one year would be responsible for a capital gain between the sales price ($105,800) and the depreciated basis ($94,645). Thus, the government will still tax the entire gain, but the majority of taxes will be deferred until the investment is sold. If your investment basis gets to zero (which is likely if you hold the investment for more than 10-15 years) you will have to start paying tax on further distributions.

Hopefully this article has helped you better understand the MLP investment opportunities. MLPs aren’t without risk. Investors chasing high yields may be putting themselves at high risk, but there are many midstream options that yield 4 percent to 6 percent without much direct commodity exposure. There are also specific tax implications, but the benefits can make MLPs a good options for conservative buy-and-hold income-seekers. If this is your goal, you should get better acquainted with this growing sector.