Stellar Growth Ahead for Solar

Nearly all of our energy sources derive from the sun. Coal, oil, and natural gas are all various forms of sunshine captured via photosynthesis and first stored away as biomass, and ultimately converted into fossil fuels. In addition to the ancient sunshine of fossil fuels, the sun’s rays are directly captured in solar photovoltaic (PV) and solar heating applications.  The sun’s rays are also converted into energy via biomass, which is used for heat, power, and to produce biofuels. Wind power is produced from winds that are created when the surface of the earth is heated unevenly. Hydroelectric power ultimately traces to the evaporation of water from heat, and the sun’s gravitational force is partially responsible for the tides.

The only two major source of energy that don’t derive directly from our sun are nuclear power and geothermal energy, and these together only account for about 5 percent of global energy consumption.

So when someone asks me what energy source will replace fossil fuels, I always say “solar power.” That answer will almost certainly prove to be correct. But in order to be useful intelligence for an investor, we have to be a little more specific about what this means.

Solar PV is already making major inroads into the electrical generation industry. From 2007 through 2012, the solar PV industry has added capacity at an average annual rate of 60 percent. 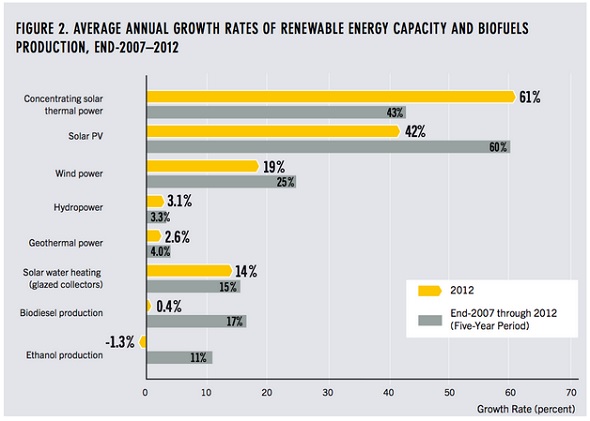 To date wind generation has grown at a faster rate than generation from solar PV, but based on solar’s much faster rate of capacity installation and the fact that small scale solar is more universally applicable than small scale wind, in time solar PV will likely grow to be a major provider of electricity. The contribution from solar PV is still small — only 0.4 percent of global electricity production in 2012. But that’s 12 times higher than its contribution in 2007 — and the phenomenal growth looks set to continue.

The solar PV sector is likely to outperform the market averages over the next decade. However, it can be hard to find fair value in this hot sector, so it certainly helps to buy on extreme weakness when volatility and fear strike. For example, on Aug. 28 we recommended First Solar (Nasdaq: FSLR) to The Energy Strategist subscribers. Last month, we urged the same subscribers to take some money off the table after a gain of more than 80 percent. At the moment I see no real bargains in the sector, but First Solar is one that I would add on a significant correction. Over the long haul the solar PV sector looks like a big winner, but you need to be selective with your entry points.

What About Transportation Fuel?

Solar PV is making inroads into the electricity generation sector, but what about transportation fuels? Solar PV may play an important role there as well. As mentioned above, all biofuels are an indirect form of solar power, but there are ways to utilize solar PV for fuel production.

This past week I toured the ranch of  Henk Rogers on Hawaii’s Big Island. Henk is an interesting character, best known for bringing the game “Tetris” — the world’s most popular video game with over 125 million units sold — to handheld video game devices. Henk also holds the exclusive intellectual property rights to Tetris. Having made a fortune in the video gaming world, Henk has turned his attention to sustainable energy with his Blue Planet Foundation. (Rogers also supports the Hawaii Space Exploration Analog & Simulation, a long-duration simulated Mars exploration habitat 8,200 feet above sea level on Mauna Loa.)

Henk has built an energy lab on the Big Island where he is experimenting with a number of technologies for producing and storing energy. The roof over his lab is studded with 360 solar PV panels generating up to 85 kW of electricity — enough to power about 17 homes in Hawaii. But he is also using the electricity from the solar panels to produce hydrogen, which is used to supply the only hydrogen refueling station on the Big Island.

As I explained last week in One More ‘Free Lunch’ in Energy, it always takes more energy to split water into hydrogen and oxygen than you can get back from burning the hydrogen. But such a scheme might make sense in some instances if the electricity is cheap. At times renewable energy installations may produce more power than the grid can absorb, and it could be directed into electrolysis of water to produce hydrogen for later consumption. In this way, the hydrogen is acting like an energy storage device.

Hydrogen can be used either directly in a combustion engine (where the combustion product is simply water) or, more efficiently, in a fuel cell that converts chemical energy into electricity. Fuel cells are still quite expensive, but they can be used to provide backup electrical power or to power a vehicle. Henk’s lab is experimenting with fuel cells from several manufacturers, including Plug Power (Nasdaq: PLUG) — which incidentally has seen its share price rise more than 40-fold over the past 12 months.

Henk’s team is also experimenting with various battery storage technologies. They had a vanadium-redox flow stack, as well as a bank of lithium iron phosphate batteries from Sony. I discussed the problem of energy storage with Blue Planet Research’s Chief Technology Officer Vincent Paul Ponthieux, and we both agree that cost effective energy storage is a critically important enabler of a future powered by solar energy. 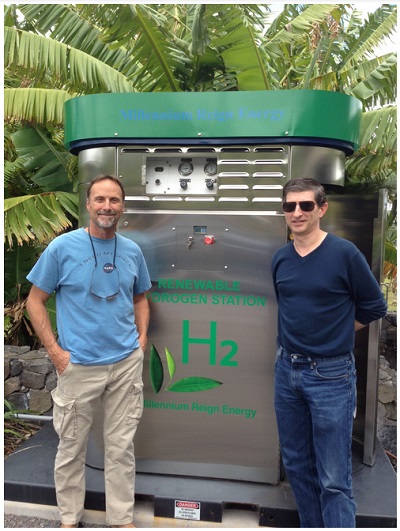 Given that this is a small experimental facility for hydrogen production, it is not expected that it will be cost effective. However, it is worth mentioning the costs to keep things in perspective. To produce hydrogen from the solar PV panels at Henk Rogers’ ranch requires an electrolyzer that cost $125,000. That electrolyzer is capable of producing 12 kilograms of hydrogen a day. Those 12 kilograms of hydrogen contain the energy content of about 12 gallons of gasoline. Thus, over the course of a year that $125,000 electrolyzer might produce hydrogen with the energy equivalent of $10,000 to $15,000 worth of gasoline. But these costs are expected to go down as the system is scaled up.

Still, one could easily envision a future in which solar PV is producing electricity to power our homes and electric cars and getting stored in batteries for later use. Alternatively, excess solar could be used to produce hydrogen for use in an internal combustion engine or in a hydrogen fuel cell. The solar PV sector will be a big winner in this scenario.

This is one vision of life after fossil fuels. Parts of the vision are already coming to fruition with the rise of renewable power in electricity production. For the foreseeable future, this is likely to be the biggest growth area, with coal ultimately the biggest casualty. But in the longer term, don’t be surprised to see solar PV-derived transportation fuels making bigger inroads.