Is Shale Drilling a Sham?

California has been a major oil-producing state for more than 100 years, although production there has been in decline for nearly 30 years. California also has one of the country’s major oil and gas-bearing shale formations, the Monterey Shale in the San Joaquin Basin. In 2011 the US Energy Information Administration (EIA) estimated that the Monterey Shale holds 15 billion barrels of oil, which at that time represented 64 percent of the total estimated US shale oil resource.

But this past week, the Los Angeles Times reported that the EIA is about to slash its prior estimate of recoverable oil in the Monterey Shale by a whopping 96 percent. This is certainly a big news story, but some of the narratives promoted in the wake of this news have gotten a bit carried away. 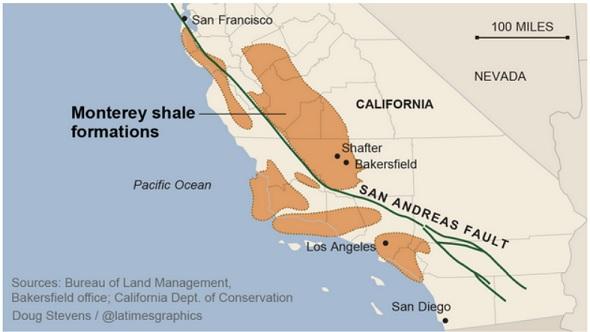 There have been skeptics of the shale oil and gas boom ever since it began, and many of them spun the downward revision just like The Guardian did: Write-down of two-thirds of US shale oil explodes fracking myth. After five years of growing oil and gas production in the US, are the skeptics finally vindicated? Is it really possible that the shale boom is just a mirage or myth, as some have been claiming for years now?

The Monterey is but one of the major shale, or tight oil/gas formations around the country. Other major oil-producing shales include the Eagle Ford in Texas and the Bakken Formation in North Dakota, and for natural gas production the Marcellus and Utica shales in the northeast, the Haynesville Shale that underlies parts of Arkansas, Louisiana, and Texas, the Barnett Shale located in north central Texas (south and west of Dallas), and the Woodford Shale in Oklahoma. But the geologies of these shales can be very different. 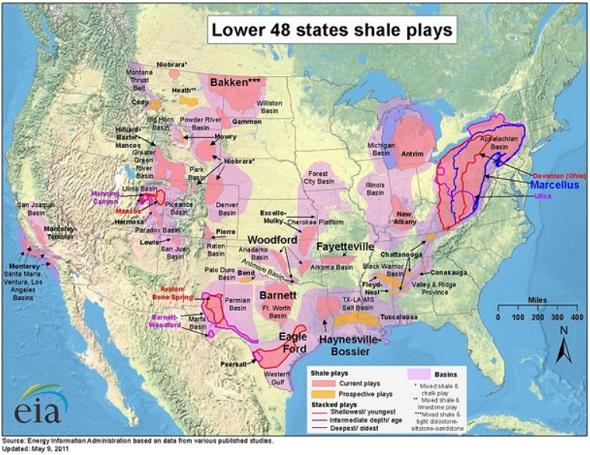 While the most recent estimate from the EIA is that there are 3.2 billion barrels of proved reserves in the Bakken, that reserve would have to be written down to essentially zero if oil prices fell and remained depressed. This is an important point often missed when an oil or gas company, for example, has to write down reserves. There is often a misinterpretation that the company failed to find oil or gas where its geologists thought it existed, but more often it’s that the oil or gas that is there requires a higher price before it can be classified as a proved reserve. Another way to think about it is that proved reserves are much larger with oil at $100/bbl than they are when oil is $50/bbl. So if oil and gas prices fall, companies may have to write down proved reserves (and vice versa).

But the oil in the Monterey Shale was never in the proved reserves category. It is a case where there is a potentially big resource, but the geology is much more complex than in the Bakken or Eagle Ford. As a result California has not enjoyed the shale oil booms underway in North Dakota and Texas.

One has to keep in mind is that the “oil industry” is not a unified, monolithic entity. Chevron (NYSE: CVX) has a major presence in California (it’s also headquartered there), and is among those who have long expressed skepticism at the Monterey’s potential. In a statement for CNBC story on the Monterey Shale more than a year ago, Chevron wrote “Chevron does not see the same level of promise in the Monterey Shale as other companies…we have not been encouraged by the results of the wells we have drilled into the formation.”

There is an important lesson there. No all oil companies are the same, and one has to be careful of painting with a broad brush. Some oil companies are overleveraged. That doesn’t extrapolate to the conclusion some have made that the shale boom is built on a house of (credit) cards. Some companies are investing far more than they will recoup any time soon, and some will have negative free cash flow for several years. These companies need prices to remain high, and for production to continue expanding. But that isn’t universally true. There will be winners and losers (and that includes countries, some of which have huge shale resources but either challenging geologies or insufficient water for fracking).

So I wouldn’t be so quick to dismiss the shale boom on the basis of the Monterey revision. In contrast to the downsized estimate for Monterey, last year the US Geological Survey (USGS) more than doubled its estimate of recoverable oil in the Williston Basin (home to the Bakken) on the basis of field results — the same process that led to the downward Monterey revision. Was this widely reported by those who are now gleefully calling the shale boom a myth? If not, I would argue that they aren’t being entirely objective, and are falling victim to confirmation bias.

Yes, this shale boom will inevitably end. And yes, we still have to keep in perspective that oil is a depleting resource, and we need to continue to plan for the ultimate depletion of that resource. But we also have to acknowledge reality. It’s not a myth that since 2008 US oil production has been rising at its fastest rate in history. It’s not a myth that North Dakota has had a 10-fold increase in oil production in 10 years, or that Texas oil production has gone up by nearly 2 million barrels per day in four years. If you have shunned shale oil and gas companies because you have been convinced that this boom is a myth, you have missed out on a lot of very real opportunities.