This past week the Environmental Protection Agency (EPA) issued a new regulation that would require states to cut carbon dioxide emissions from existing coal- and gas-fired power plants. States would need to reduce these emissions by an average of 30 percent below 2005 levels by 2030. Many are calling this President Barack Obama’s boldest step yet to reduce US carbon dioxide emissions, and an attempt to cement his environmental legacy as he enters the last years of his presidency. 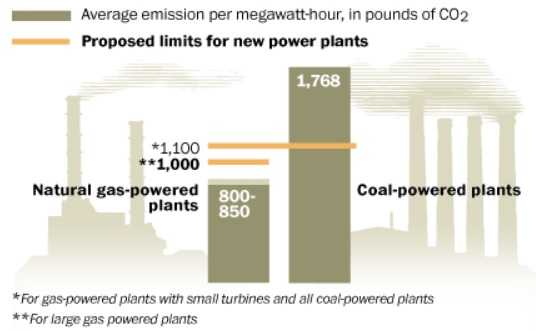 From the EPA press release announcing the proposed rule:

“Climate change, fueled by carbon pollution, supercharges risks to our health, our economy, and our way of life. EPA is delivering on a vital piece of President Obama’s Climate Action Plan by proposing a Clean Power Plan that will cut harmful carbon pollution from our largest source — power plants,” said EPA Administrator Gina McCarthy. “By leveraging cleaner energy sources and cutting energy waste, this plan will clean the air we breathe while helping slow climate change so we can leave a safe and healthy future for our kids. We don’t have to choose between a healthy economy and a healthy environment — our action will sharpen America’s competitive edge, spur innovation, and create jobs.”

The EPA projects that the change would have the following impacts:

The EPA will next hold a public comment period and then potentially revise the proposal based on the feedback. Under the current proposal, states would have until June 30, 2016, to submit plans for achieving the reduced emissions target.

You can expect attempts to impose the regulation to result in an epic battle between environmental groups, states, industry groups, and the EPA — and court challenges are assured. Some congressional Republicans have already announced plans to block implementation of the rule.

There is always the chance that a court challenge will succeed, or that the next president will move to overturn the regulations. However, this is unlikely in my view. I expect that the new rule will survive challenges, that utilities will be well down the path of compliance by the time the new president is sworn in and there really won’t be much likelihood of turning back.

The US is attempting to show leadership on this issue, but the challenge is that even though the US has the largest share of legacy carbon dioxide emissions, other regions have overtaken the US and will drive future emissions. Even if the US could drop emissions all the way to zero, global emissions will continue to rise without substantial global action. Over the past decade, the world added more than the equivalent of US emissions (a time that actually saw US emissions decline). So while this is a big step for the US, it must translate into global action if there is to be real progress on this issue.

In the years ahead carbon dioxide emissions are going to be increasingly driven by developing countries. Many of these countries are committing themselves to decades of new emissions with new coal-fired power plants. In fact, globally there are ~1200 new coal-fired power plants on the drawing board. These proposed plants cover 56 countries, but 76 percent them are in India and China.

Of course, as a consumer and as an investor you want to know how this will affect you. This regulation would effectively end coal-fired power in the US in the long run. We had seen the handwriting on the wall here, and have been advising investors away from most coal companies. Regardless of how cheap they may seem, this is just not a sector with a bright future in the US. Some companies will weather the storm — the US won’t stop burning coal overnight, and some suppliers will find viable export markets — but there are better options in the energy sector.

Nuclear power should benefit from this rule, but its near-term future looks better globally than here in the US. The biggest beneficiaries in the US will be the natural gas sector (a drum we have been beating all year with good results) and the renewables sector.

Next week we are going to take a deeper dive into the renewables sector. The most comprehensive review on the global renewable sector — the Renewables 2014 Global Status Report — was just released last week. We will break it down and handicap the sectors that we believe will flourish given the new EPA regulation on carbon dioxide.