I believe that the GSR is the most comprehensive report available when it comes to the global renewable energy picture, but I may be somewhat biased as I have been a contributor to and reviewer of the report for the past five years. Each year when it is released, I like to provide an overview and highlight promising sectors for investors.

Following last year’s GSR release we took a deep dive into the solar sector and came up with a gem for subscribers in First Solar (Nasdaq: FSLR), which returned 88 percent in under seven months before we advised subscribers to take some money off the table (and FSLR is down 7 percent since we provided that advice on March 20). We did the same solar deep dive in last week’s Energy Strategist, and made another recommendation in the sector, which has already gained more than 10 percent since. But today I provide a general overview of the GSR.

Despite declining policy support and uncertainty in many European countries and the US, renewables continued to grow globally. In the power sector global capacity exceeded 1,560 gigawatts (GW), up more than 8 percent over 2012. Hydropower rose by 4 percent to approximately 1,000 GW, and other renewables collectively grew nearly 17 percent to more than 560 GW.

Solar photovoltaics (PV) continued to expand at a rapid rate, with growth in global capacity averaging almost 55 percent annually over the past five years. Even as global investment in solar PV declined by nearly 22 percent from 2012, new PV capacity installations increased by about 32 percent as a result of sharply falling levelized costs. For the first time ever, the world added more solar PV than wind power capacity in 2013. 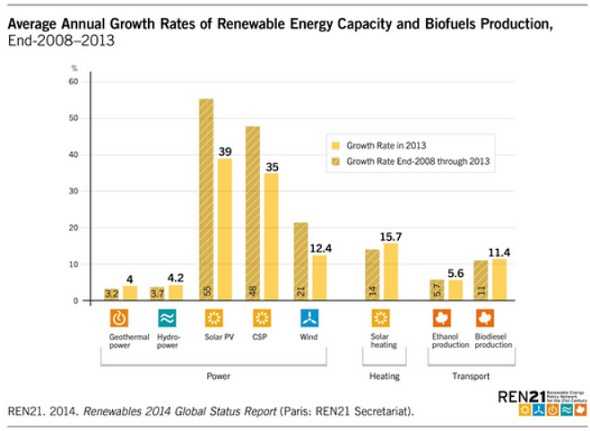 After a few years of uneven growth, global ethanol and biodiesel production both increased in 2013. By early 2014, at least 63 countries used regulatory policies to promote the production or consumption of biofuels for transport — up from the 49 reported in GSR 2013.

Global new investment in non-hydropower renewable power and fuels was an estimated $214 billion in 2013, 53 percent of which went into solar power. The total was down 14 percent from 2012 and 23 percent lower than the current peak investment year of 2011. (Japan was a notable exception, with an increase in renewable investments of 80 percent over 2012.) Part of the decline in investment can be attributed to declining government subsidies in some countries, but some of it is likely the result of falling technology costs. Solar PV, for example, saw record levels of new installations in 2013, despite a 22 percent decline in dollars invested.

China made the largest investment globally at $54 billion, followed by the US ($34 billion), Japan ($29 billion), the United Kingdom ($12 billion) and Germany ($10 billion). Rounding out the top 10 were Canada, India, South Africa, Australia and Italy.

The new Renewables 2014 Global Status Report confirms that renewables continue to grow globally, but that growth has slowed for major sectors like wind power and solar power. This slowdown was caused in part by a shift in government policies in some EU countries like Germany. Regionally, Asia is beginning to take a more dominant role in renewable energy investments, as China invested more in renewable energy in 2013 than did all of Europe combined.

While growth in solar power slowed, solar power’s growth rate has been substantially higher than wind power’s over the past five years. In 2013, new capacity additions of solar PV surpassed wind power capacity additions for the first time, and solar power received more than half of all renewable energy investments. I expect this trend to continue, and for solar to be the best long-term bet in the renewable energy space. See last week’s Energy Strategist for a more detailed look at the solar sector.