Each week I get multiple requests to comment on a particular energy-related claim. Some of these come up again and again — “Is it true that there is a car that runs on water, but the oil companies have suppressed it?” — while others are based on recent news headlines. These queries sometimes inspire me to write about the topic just to set the record straight.

About six years ago an old friend forwarded me a teaser for a newsletter that made various claims about the Bakken Shale formation that is mainly under North Dakota. The teaser itself was a mish-mash of truths, half-truths, and misinformation (e.g., it casually confused shale oil and oil shale), but the overall message was that the Bakken had the potential to be a very big deal. So my friend wanted to know “Is this true?”

At that time, North Dakota produced about 150,000 barrels per day (bpd) of oil, but that had been gradually creeping up over time. I explained to my friend that indeed there was a lot of oil there, and this had been known for a long time. However, contrary to the teaser’s claim that the oil could be extracted for $16 a barrel (bbl), the marginal cost for producing this oil was probably close to $100/bbl.

Then a funny thing happened. The price of oil rose above $100, and despite some retreats below that level it seemed to find a home near that price. That provided plenty of incentive to drill, and oil producers who had only recently begun to use horizontal drilling in conjunction with hydraulic fracturing (fracking) got better and better at doing so. This reduced the cost of production, further incentivizing oil production.

The ensuing production increase was astonishing, and vaulted North Dakota into second place among US oil producers (behind Texas): 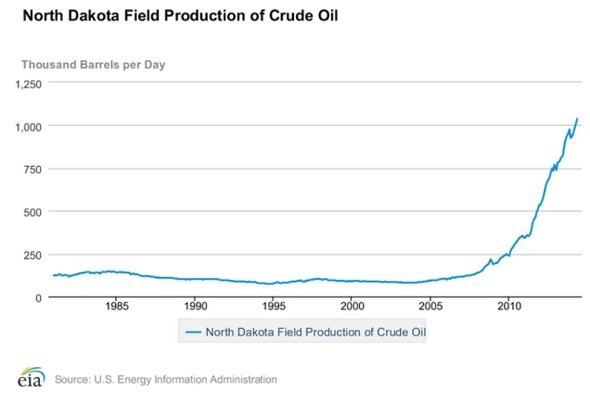 Oil production in the Bakken Formation recently surpassed one million bpd, and is projected to grow to 1.7 million bpd by 2020. In honor of this milestone, let’s refresh ourselves on the Bakken, including the major producers in the area. 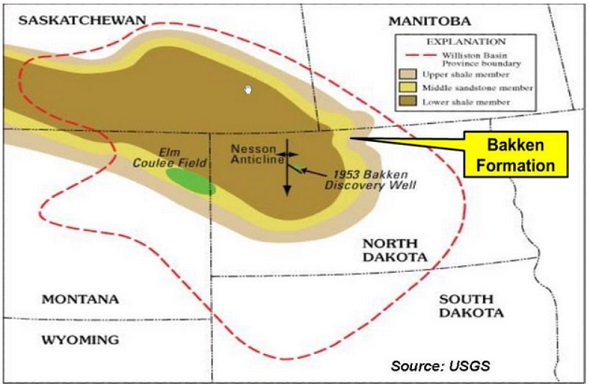 But of most interest to readers will be which companies are going to produce the remaining oil in the Bakken.

Oklahoma City-based Continental Resources (NYSE: CLR) was the first to complete a horizontal well in the Three Forks formation, and to date the company has drilled about 20% of all Three Forks wells. Continental is the largest leaseholder and oil producer in the Bakken with more than 1.1 million acres leased. Continental’s Bakken production totaled 108,573 barrels of oil equivalent (boe) per day in second quarter 2014, an increase of 23% from a year earlier.

The second largest producer in the Bakken is Whiting Petroleum (NYSE: WLL), which averaged 80,195 boe/d in Q2 2014, an increase of 33% in a year. Whiting has a total of 674,162 net acres in the Williston Basin in North Dakota and Montana. Whiting has held the top producer spot in the past, and should soon regain that spot. It recently announced a $6 billion all stock acquisition of Kodiak Oil & Gas (NYSE: KOG), the eighth largest oil producer in the Bakken. The transaction will create the largest Bakken/Three Forks producer, with production of more than 107,000 boe/d in the first quarter of 2014, 855,000 combined net acres and an inventory of 3,460 net future drilling locations.

Bakken oil production is a small part of the overall portfolio of Hess (NYSE: HES), but that’s good enough for third place among Bakken producers. Hess reported 80,000 boe/d of Bakken production in Q2 2014, up 25% over Q2 2013.

EOG Resources (NYSE: EOG) is perhaps best known as the largest oil producer in the Eagle Ford formation in Texas, but the company is also one of the top five oil and gas producers in the Bakken. EOG keeps oil production figures for different production areas pretty close to the vest, but the North Dakota state government does tabulate oil production figures for the companies that produce there. Based on the numbers that were made publicly available (some are listed “Confidential” and unavailable), EOG produced just under 70,000 barrels of oil per day in May 2014. It is possible that if the natural gas EOG produced were included it would rank ahead of Hess in boe/d, but without having all the data available it’s impossible to be certain.

Rounding out the top five for Bakken oil production is Norway’s Statoil (NYSE: STO). Statoil entered the Bakken in 2011 when it acquired Brigham Exploration, a major operator in the Williston Basin. Statoil now holds approximately 330,000 net acres in the Bakken, and in Q2 2014 produced 50,200 boe/d in the Bakken.

Other major producers in the Bakken include the aforementioned Kodiak Oil and Gas that is merging with Whiting, Marathon Oil (NYSE: MRO), XTO Energy (which was acquired by ExxonMobil (NYSE: XOM)), Oasis Petroleum (NYSE: OAS) — with the exit of Kodiak, the only remaining pure play on the Williston Basin in the top 10 — and Burlington Resources, owned by ConocoPhillips (NYSE: COP).

Are there any risk factors that could derail this Bakken shale oil boom? There are at least three. One is that oil prices need to remain high in order to keep production growing. The marginal cost of producing crude oil in the Bakken is still in the neighborhood of $100/bbl. A sustained dip to $80/bbl or less would slow the recent production growth rate.

The second risk factor is the possibility that the infrastructure won’t be able to keep up with the growing oil supply. So far the solution to this challenge — in addition to large investments in pipeline infrastructure — has been to use rail cars to move the crude oil out of the area. In just three years the railroads went from essentially zero barrels to 700,000 bpd of crude oil shipped. That is about the volume carried by a fairly large crude oil pipeline. But shipping by rail carries special risks, and recent findings that Bakken oil is more volatile than most crudes are leading to pressure on both the oil industry and the railroads to address this problem.

Finally, a lot of the natural gas that is co-produced with the crude oil is flared. The gas is flared because in many cases there is no cost effective way to get it to market, but this increases the carbon dioxide emissions associated with Bakken oil production. The flaring is so extensive that the Bakken fields glow like a major city at night: 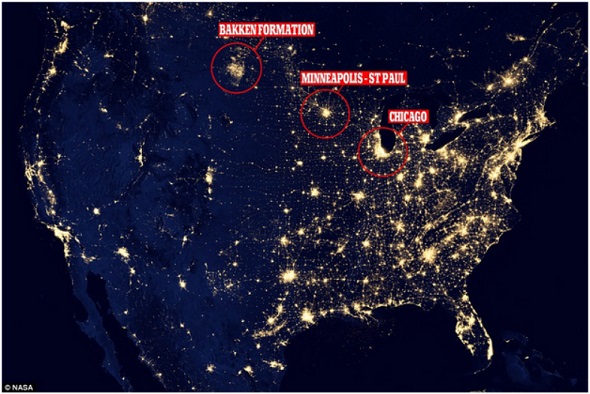 The state of North Dakota recently declared that enough was enough regarding the flaring, and has  ordered companies to find a way to reduce flaring or face mandated production cuts. This will, in turn, likely add to production cost, increasing the risks associated with falling oil prices.

The Bakken Formation was first characterized in the 1950s, and it has produced small volumes of oil for decades. But the marriage of hydraulic fracturing with horizontal drilling led to an oil boom in North Dakota that would rank its oil production ahead of countries like Qatar. Critics of the shale oil boom are right to note that production will eventually slow and decline, but timing is everything. Bakken production isn’t generally forecast to peak until the early part of the next decade, and many companies will benefit. As the easy oil is produced — and presuming oil prices rise — Montana may see its own oil boom, along with the Canadian provinces of Manitoba and Saskatchewan. Join us at The Energy Strategist to invest in the companies profiting the most from this ongoing Bakken boom.