Exploding Marcellus Has More in the Tank

In last week’s Energy Letter, I discussed the one million barrel per day (bpd) milestone for North Dakota oil production, and provided a refresher on the geology and the players in North Dakota’s Williston Basin. 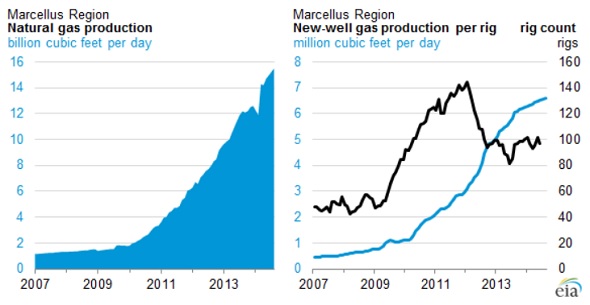 Marcellus gas production has increased from 2 Bcf/d in 2010 to 15 Bcf/d today, and it is now the largest shale gas producing region in North America. In fact, the current 15 Bcf/d is equivalent to Canada’s average rate of production last year, and nearly three times Mexico’s.

So this week in honor of another milestone, let’s take a tour of the Marcellus.

The Marcellus Shale is a black shale formation found largely underneath Pennsylvania, West Virginia, southern New York, eastern Ohio, and extreme western Maryland. Most Marcellus wells are drilled at a depth of 5,000 to 9,000 feet beneath the surface, and are then turned horizontally up to 10,000 feet. The wells are hydraulically fractured to release (primarily) the natural gas from the shale. Much of the Marcellus production to date has taken place in Pennsylvania, where the thickness of the formation ranges from 20 feet in the northwest of the state to more than 250 feet in the northeast. 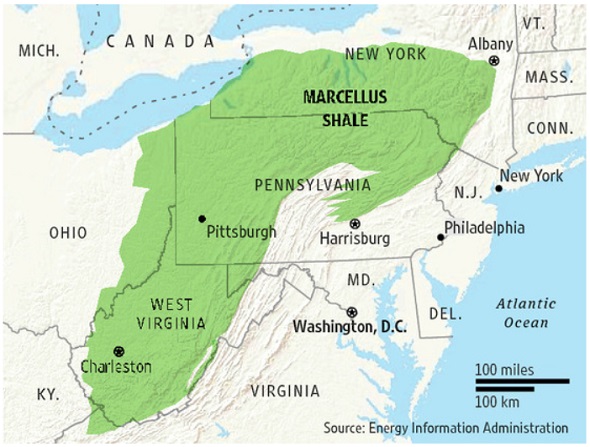 Just as the Three Forks formation in North Dakota underlies the Bakken, the Utica Shale underlies large parts of the Marcellus, but the Utica also extends further west into Ohio. Above the Marcellus lies the Upper Devonian, and the entire region is part of the Appalachian Basin. 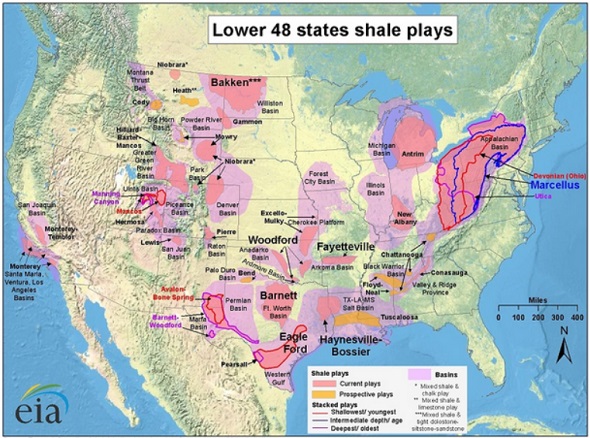 Just to put into perspective what a big deal this shale gas play is (if the explosive growth of Pennsylvania’s gas production is insufficient), the EIA estimated in 2009 that Pennsylvania’s proved shale gas reserves were 88 billion cubic feet (Bcf), which is equivalent to less than a day and a half of US production. At the end of 2012, the EIA had upped that estimate to 32,681 Bcf, a 371-fold increase. Over that same time span, West Virginia saw its own proved shale gas reserves increased from 14 Bcf to 9,408 Bcf.

The Marcellus is really ground zero for the controversies surrounding fracking, so let me make a small digression to bring readers up to speed. Hydraulic fracturing, or “fracking” had been around since the late 1940s and has been used for decades to promote higher production rates from oil and gas wells across traditional production regions like Texas and Oklahoma. Fracking has been used to stimulate oil and gas production in more than 1 million wells in the US.

Fracking involves pumping water, chemicals and a proppant down an oil or gas well under high pressure to break open channels (fractures) in the reservoir rock trapping the deposit. Oil and gas do not travel easily through these shale formations, which is why they need to be fractured. The proppant is a granular material designed to hold those channels open, allowing the oil (or natural gas) to flow to the well bore. Some common proppants include sand, ceramics, glass beads — even walnut shells have been utilized, but sand is by far the most common proppant in use.

While fracking has been around for decades, two developments in recent years are responsible for thrusting the technique into the public eye. 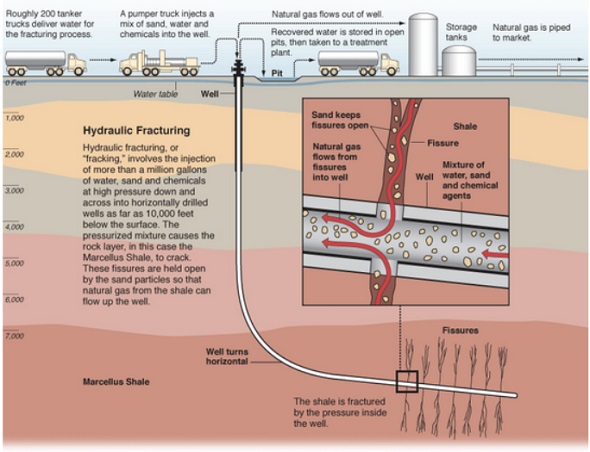 The second development is that drilling started to push into populated areas unaccustomed to oil and gas development. If fracking was still relegated to the traditional oil and gas producing states, I doubt much of the public would have heard of it. But these populated areas weren’t used to having energy development in their backyard, and as it began to happen many people rebelled against this intrusion into their lives. As someone who believes that fracking is generally safe, I can nevertheless understand the desire by locals to keep it out of their neighborhood. Even ExxonMobil CEO Rex Tillerson joined a lawsuit (which he later dropped out of) against a fracking-related development in his neighborhood.

I don’t want to get into the a long digression on the evidence regarding the environmental implications here. There is enough material there to fill two or three Energy Letters. I will just say that I believe fracking is generally safe, and concerns over water supplies are mostly overblown. (There is generally more than a mile of rock between fracked zones and water supplies).  However, I think there is substantial evidence that reinjecting wastewater from fracking back into the ground is responsible for the enormous increase in earthquakes in my home state of Oklahoma.

Now, back to the Marcellus.

The shale gas boom has a lot of critics, both from an environmental perspective and from an economic and/or sustainability perspective. One frequent criticism is that shale gas wells deplete rapidly in the first year or so, and therefore more and more wells must be drilled just to make up for what has been depleted. This is absolutely correct, as can be seen in the following graphics from the EIA: 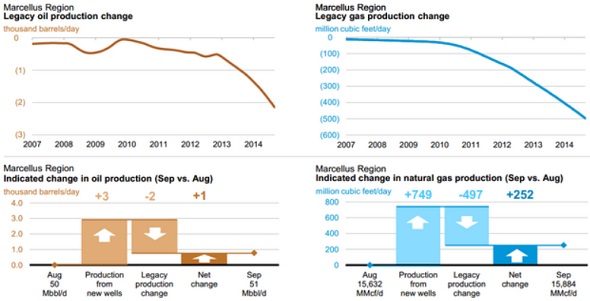 The graphics clearly show that cumulative legacy production falls rapidly (and for individual wells the decline is even steeper), but to date this has been more than offset by production from new wells. This of course can’t go on forever, and when the drilling sites are saturated the region will likely see gas production decline steeply. Most forecasts don’t anticipate a decline setting in for at least a few more years, but it’s something we will be watching closely here.

Companies in the Marcellus

Space constraints don’t allow me to take a deep dive into the Marcellus companies, which are more diverse than the Bakken producers I highlighted last week. Among the major Marcellus producers covered in depth in The Energy Strategist are Cabot Oil and Gas (NYSE: COG), EQT (NYSE: EQT), Range Resources (NYSE: RRC) and Southwestern Energy (NYSE: SWN). However, these companies vary in lot in their production (gas versus liquids) and risk profile. Further, the Marcellus has logistical constraints in some areas for getting the gas to market. This has resulted in significant regional discounts on Marcellus gas at times, but has also created enormous opportunities for pipeline companies and infrastructure providers in the region.

The Marcellus Shale and surrounding Appalachian Basin have a growth story every bit as impressive as that of the Bakken, which I covered in last week’s Energy Strategist. The area has become the most important shale gas producing region in the country, despite challenges from environmentalists. In addition, there are logistical challenges that have prevented this gas from reaching some of the lucrative markets of the northeast. We expect more growth from the Marcellus and like a number of companies operating in the area. Join us at The Energy Strategist for in-depth analysis and profitable recommendations of the companies riding the Marcellus boom.