A Slippery Slope for Crude

Each year in January, I outline my expectations for the upcoming year in the energy sector. Four of the five predictions I made for 2014 look like pretty safe bets at this point. The one that had gone against me for most of the year was the prediction that crude prices would average less in 2014 than in 2013.

Given the changes in the supply/demand picture around the world, it seemed to me a pretty safe bet that oil prices would drift moderately lower this year. I felt this would be especially true for the West Texas Intermediate (WTI) given the record rate of expansion of US oil supplies, combined with the fact that crude oil exports from the US have been banned since 1975 to all countries besides Canada. Rapidly increasing US supplies combined with US demand that has been flat in recent years is a recipe for lower prices.

Over the past five years US oil production has increased by 3.22 million barrels per day (bpd).  In fact, nearly 84% of the global oil production increase over that time span took place in the US. The rest of the world lagged far behind the US in growing oil production, yet most of the demand growth has been taking place in developing countries.

Despite the export ban, new US oil supplies still add to global oil supplies in two ways. The first is that they diminish US oil imports, increasing the supply available for other countries. Second, US oil refiners are allowed to export finished products, and those exports have risen sharply in recent years. Most of the increase in exports has been in the form of diesel, something that the US produces in excess. 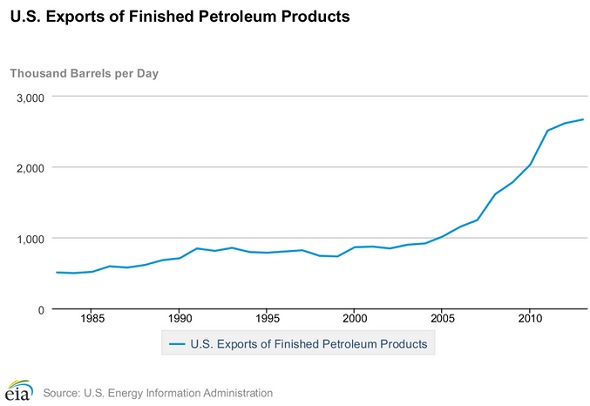 So with a flood of new production in the US (another of my 2014 predictions) — and year over year US oil production is running about a million barrels a day higher —  I felt like the short term favored softening oil prices.

But the opposite happened. In 2013, the average closing price of WTI was $97.98/barrel (bbl). By the second week of February, the price of WTI had risen above $100/bbl, and would stay there almost continuously until the end of July. But then WTI prices started to decline, and as I write these words the most recent closing WTI price was $91.18/bbl. The average daily closing price for 2014 through the first week of September was $100.60. While it’s possible that my prediction for WTI could still end up being correct, that will require WTI prices to average about $92/bbl or less for the remainder of 2014.

For Brent, the 2013 average was $108.56/bbl. Just like WTI, the price of Brent rose above last year’s average and remained there until July. And also like WTI, Brent has been declining since — trading most recently at $96.57/bbl. But with a year-to-date average of $107.52, and with prices much lower than that at present, my prediction for Brent looks fairly safe at this point.

In any case, both WTI and Brent are finally trading around where I thought they would trade for most of the year. I think the current supply/demand fundamentals are pretty consistent with current prices. But might oil prices fall lower?

In the short term, just about anything is possible. Speculators can certainly affect the price of oil over the short term and, as the Energy Information Administration recently reported, net WTI speculative futures positions rose sharply from January to about March of this year, and then remained elevated until around the first of July. From there, net long positions declined to lows last seen in May 2013. 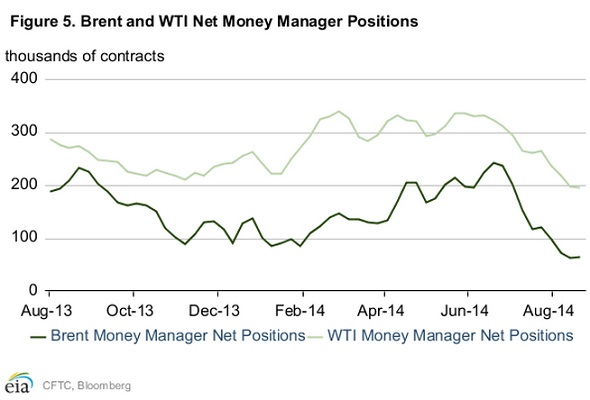 Speculators can drive down the price of oil very quickly, as quickly as they can run it up. In 2008 we saw WTI decline by $100/bbl in less than six months.

But consider that the last time the monthly average for WTI was below $80/bbl was four years ago this month. Since then, the world’s oil demand has grown by about 4 million bpd, despite oil prices that averaged nearly $100/bbl over that time span.

My point is this: despite short-term fluctuations, the world has become very much accustomed to oil at $100/bbl. Over the past three-year period, the average price of Brent crude, a global marker for internationally traded crudes, was over $110/bbl. Yet global demand grew by an average of 1.2 million bpd in each of those years.

Thus, for long-term investors positioned in quality companies, the current dip toward $90/bbl isn’t of huge concern. As long as US oil production can continue to advance at its recent pace, the price of oil will probably trade in a range of $100 +/- $15/bbl. Numerous oil companies will continue to be highly profitable at those prices — particularly those that are growing their output and thus driving the US production increase.

There is little risk in oil trading at $80/bbl for long if it reaches that low point, because marginal production will start to be shut in. Further, OPEC maintains significant power to move the world’s oil markets, and the budgets of many OPEC countries are now dependent upon $100+ oil. Therefore, they will also move to ensure that oil prices don’t remain depressed for long.

However, short-term traders or those with a lower appetite for risk need to ensure that they understand which companies are at greatest risk if oil prices trade below current levels for very long. The riskiest bets in a time of softening oil prices are oil companies that are highly leveraged, and those insufficiently hedged against falling oil prices.

The current correction in oil prices may be causing some angst for those with oil stocks in their portfolios, but long-term demand growth in developing countries will continue, and global oil production will struggle to keep pace. I have said for a few years that I expect the price of WTI to trade mostly between about $80/bbl and $120/bbl as long as US production continues to climb, but when prices do break out they will break to the high side.

While there has been an overall correction in the energy sector as oil prices have declined, this has created some real bargains in the industry. In next week’s Energy Strategist I will identify the companies most at risk in the event that oil prices remain depressed, as well as those that now look like bargains.