In last week’s Energy Letter (Down and Dirty With Fossil Fuels) I discussed the relative advantages and drawbacks of the world’s top three energy sources. This week, I cover the rest of the major energy options.

Globally, the top three sources of energy are all fossil fuels: petroleum, coal and natural gas. In 2013, these accounted for 87% of the world’s primary energy consumption, according to the  2014 BP Statistical Review of World Energy. But you might not have guessed that #4 on the list was hydropower.

Hydropower refers to a broad class of technologies that use the power of moving water to generate electricity. Most commonly, this refers to hydroelectric dams, which pass water through a turbine that spins a generator to produce electricity. In 2013, hydropower was responsible for 6.7% of the world’s primary power consumption. In fact, the five largest power plants of any kind in the world (by capacity) all run on hydropower, and the only non-hydropower plants in the top 10 are a pair of nuclear power plants (at #6 and #10).

Hydroelectricity has a lower environmental impact than many other sources of electricity. There are no emissions from the ongoing operations of a hydropower plant. However, large hydroelectric plants do alter the environment. When dams are built land must be flooded, displacing people and drastically changing the wildlife habitat. The massive Three Gorges Dam in China displaced an estimated 1.4 million people initially, a number that could rise to 4 million over the next decade. Hydroelectric projects in the US Pacific Northwest disrupted the migration patterns of a number of species of salmon, drastically reducing salmon populations in the region and pushing some species onto the endangered species list.

Contrary to the situation with the fossil fuels, there aren’t many companies that are focused predominantly on hydropower production. Idaho Power (NYSE: IDA) and Portland General Electric (NYSE: POR) are two US-based public utilities with a substantial base of hydropower generating resources, but neither is a pure hydropower play. Purer hydropower plays are foreign companies like Brazil’s Cia Energetica De Minas Gerais (NYSE: CIG), Austria’s Verbund (OTC: OEZVF), or China Yangtze Power, which operates the Three Gorges Dam and trades on the Shanghai stock exchange.

The share of nuclear power in the global energy mix has been on the decline since the Fukushima meltdown in 2011. Last year the global share of primary energy consumption from nuclear power was down to 4.4%. For global electricity production, nuclear’s share last year was 10.8%, down from nearly 14% just prior to the Fukushima accident. 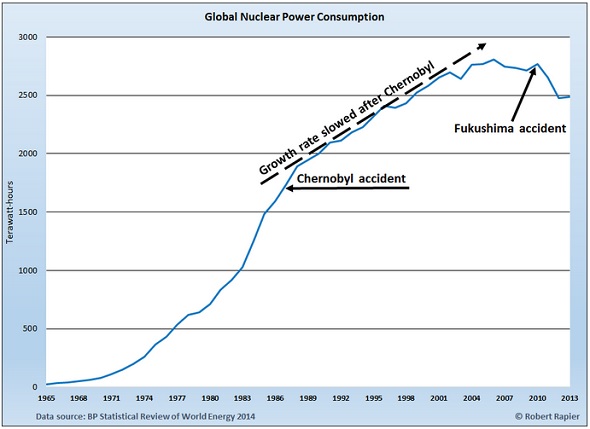 A nuclear plant operating under normal conditions has one of the lowest immediate environmental impacts of any source of energy. The lifecycle carbon emissions from nuclear-derived electricity are lower than any other source of power except for onshore wind power. (Source: See Table A.III.2). But unlike wind power, nuclear power is firm power, able to produce electricity on demand. No other major source of power can consistently match nuclear power’s 70-90% capacity factor (i.e., the ratio of a plant’s actual output over a period of time to its potential output).

But the downside to nuclear power is that a single accident at a plant — while exceedingly rare — can have enormous consequences. The 1986 Chernobyl accident in Ukraine resulted in dozens of direct fatalities (and an eventual fatality toll estimated in the thousands from increased cancers), spread contamination across many countries in Europe and left more than 1,600 square miles uninhabitable because of heavy radiation contamination. And while there were no direct deaths attributed to the Fukushima disaster, 300,000 people had to evacuate their homes — many permanently — on short notice. Only a nuclear power plant is capable of such wide-ranging consequences.

While that is the primary downside of nuclear power, there is also the issue of nuclear waste. Communities have fought to keep nuclear waste repositories out of their region, and many people don’t like the idea of living along a nuclear waste transport route. Therefore, the waste often just accumulates at the power plant, which is not a long-term solution.

Nuclear power has suffered some huge setbacks, but in the long-term many developing countries will turn to nuclear energy for firm power. It will be seen as a trade-off between the world’s other major power source — coal. (A coal-fired power plant actually emits more radioactivity into the environment than a nuclear plant.) According to the European Nuclear Society, there are currently 437 operating nuclear reactors in the world with a total capacity of 374.5 gigawatts (GW). But there are another 70 reactors under construction globally with a total capacity of 66.6 GW. About 40% of the new reactor capacity is in China.

Companies that mine uranium have been hit hard since the Fukushima disaster. Canada’s Cameco (NYSE: CCJ) is the largest publicly traded uranium miner in the world, but since Fukushima its stock has dropped 56%. Another Canadian supplier, Denison Mines (NYSE: DNN) has been hit even harder, down 70% since Fukushima. The primary problems currently facing the industry are excess supply due to the decline in global nuclear power production, and a perception that it will still be a while before the industry recovers from the downturn fueled by Fukushima. Nevertheless, based on the new reactors under construction, the industry isn’t dead just yet.

The downside of the renewables falls into several categories. For biofuels, the primary downside is that most of them utilize fairly substantial fossil fuel inputs, which makes them to a certain extent fossil fuels in disguise. The high dependence on fossil fuels is also what tends to make them cost more than fossil fuels, particularly for second-generation biofuels. Further, most biofuels are made from food crops, putting them potentially in competition with food consumers.

For wind and solar power, intermittency is the biggest downside. Unlike firm power such as that derived from coal or nuclear power, wind and solar power can’t always be counted on when needed. Therefore, they require firm power sources as backup. Both sources have also been responsible for the death of many birds. Most recently a report from the US Fish and Wildlife Service called the Ivanpah concentrating solar power (CSP) plant a “megatrap” and made recommendations on how to make CSP safer for birds. Historically these have also been more expensive sources of energy that required subsidies, but costs are coming down (especially rapidly for solar power).

Geothermal power is perhaps the most innocuous power source of all. Geothermal electricity has a high capacity factor, and the cost of generation is comparable to that of coal-fired generation. During normal operations, there are no carbon emissions, although there are sometimes emissions of harmful gases when geothermal wells are drilled. The main disadvantage of geothermal is that it is geographically limited to regions that have relatively shallow geothermal resources — which is a small fraction of the earth’s surface.

Energy policy is dictated by politics, which is dictated by perception. We must understand that there is no perfect energy source, even among those considered renewable. Each of our energy options has its advantages, but there are also costs, trade-offs, and risks associated with each. It is important to understand the nature of these costs and trade-offs, as well as the potential risks and consequences in order to have fruitful discussions over the direction of US energy policy.