The Problem With a Strong Dollar

The dollar is on its longest winning streak in more than 17 years and is now trading at a four-year peak against other currencies, but don’t rejoice. This is not a good time for the dollar to be strengthening.

A stronger dollar will make U.S. exports more expensive to foreign customers, and that could cut into the profits of many U.S. companies, which could harm or stop the recovery. And the strong dollar could lead to price deflation, which could also harm the recovery.

While a strengthening dollar was not a big issue when U.S. exports were a small part of corporate earnings, now more than 40% of profits for Standard & Poor’s 500 firms come from overseas. And these profits from higher-growth emerging markets have offset lower growth in the U.S. and other developed economies.

Of course, some analysts believe that the dollar strengthening isn’t so bad. They think it’s just a reflection of investors looking forward the Fed raising interest rates as the U.S. economy improves. Higher rates means higher demand for dollar-denominated debt, which pushes up the price of dollars. Some analysts have even speculated that the dollar’s strength will be a boon for U.S. equity markets as it means more investment will come to U.S. companies.

But that assumes our recovery is on solid ground. The U.S. economy expanded at an annual rate of 4.6% in the second quarter, according to the Commerce Department. But this is following a first quarter where GDP contracted by 2.9%. So declaring that the U.S. economy has turned the corner is premature. The housing market still struggles, consumer spending is still weak and jobs being created are lower paying.

The U.S. economy is still projected to deliver a tepid 2% growth for the year, according to Federal Reserve projections. I’d like to see a few quarters of consistent growth before concluding the U.S. recovery is here to stay. And the U.S. economy would have to deliver better than 3% GDP growth annually before I would even think to break out the champagne.

Rise of the U.S. Dollar: Fall in the U.S. Economy? 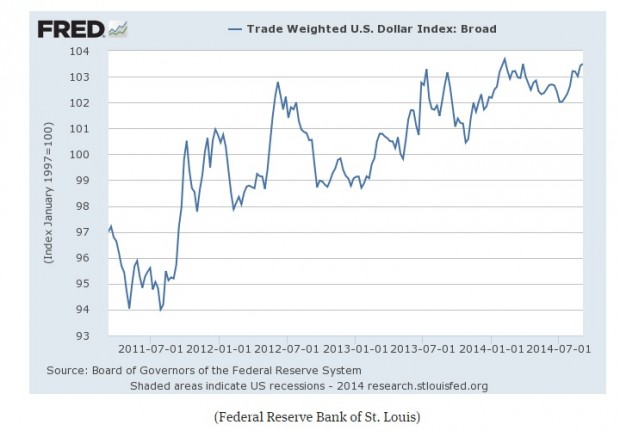 At least most asset managers predict the dollar strengthening won’t mean a great sell off, as happened last summer when Ben Bernanke’s stimulus tapering comments led to a huge drop in emerging market stocks. Investors at the time thought that the tapering meant that rate increases were imminent, only to be told later that the economy was much too weak for rate increases anytime soon. Investors are unlikely to jump the gun twice.

In designing the Global Income Edge portfolios, I looked for companies that could protect against a sudden decline in growth in developed or developing economies by offering diversification – as well as making the portfolio deflation proof by choosing industries that have pricing power.

National Grid (NYSE: NGG) is a good example of a Global Income Edge portfolio company that offers both international diversification and protection against deflation. The energy utility is diversified, with 65% of its operations in the UK and 35% in the U.S. And given the firm has pricing power via regulated rates it sustain profits in periods of deflation.

In the healthcare area there’s GlaxoSmithKline (NYSE: GSK) a firm that distributes its pharmaceuticals and consumer healthcare products throughout the world in a sector that clearly has pricing power given the demand for high quality healthcare.