A Rosetta Stone of Our Own

Readers may be aware that I write three newsletters for Investing Daily on a regular basis. Each week I write The Energy Letter, which you are reading now, and MLP Investing Insider. During the second and fourth week of each month I write The Energy Strategist (TES), a subscription newsletter in which my colleague Igor Greenwald and I take a deeper dive into energy companies and Master Limited Partnerships (MLPs). We also manage three model portfolios for TES, which have consistently beaten our relevant market indices over the two-plus years we have been managing the portfolios. We make specific buy and sell recommendations in TES.

In addition to the above, I contribute occasional articles to Personal Finance (I am writing one currently for an issue next month), and on occasion I will contribute an article to MLP Profits, which is Igor’s subscription newsletter.

Typically, the material for each of these newsletters is written totally from scratch. That means that in addition to some of the other articles I write, I usually write in the neighborhood of 150 original articles each year. It’s not always easy to come up with new material. Often there is a new IPO or a company that is in the news for something noteworthy, and it’s a pretty easy decision. Most of the time I have a backlog of stories that I want to cover, and in fact that is the case now.

Nevertheless, for this week’s Energy Letter I am going to cover a topic that I partially covered in this week’s TES. Subscribers to TES will have seen this material in Screening for Energy Winners. In the article I introduced a new stock screening tool that we have been developing, and I show a couple of instances in which we have used it to gain a deeper understanding of a particular company’s value. I first screened the world’s major integrated oil and gas companies to show what makes BP (NYSE: BP) an interesting acquisition target, but also to discuss which companies might be capable of pulling off such an enormous acquisition.

In the second screen, I took a look at the recently announced $2.1 billion acquisition by Noble Energy (NYSE: NBL) of Rosetta Resources (NASDAQ: ROSE). The screen highlighted some of the factors that made Rosetta so attractive to Noble, and identified other companies with “Rosetta-like” metrics that therefore might also become acquisition targets.

The tool we have developed with one of our computer programmers retrieves and analyzes real-time financial market data from the Bloomberg Professional service. The numbers are far more comprehensive than you will find at Yahoo Finance, Google Finance, or for that matter any other site I have seen that provides free financial information. The data is also tailored to the financial metrics important to the oil and gas industry.

My goal is to be able to analyze comparable companies based on the value of their reserves, indebtedness, enterprise value (EV), etc. The EV is a measure of a company’s total value, which is calculated as the market capitalization plus debt, minority interest and preferred shares, minus total cash and cash equivalents. The EV/EBITDA ratio is analogous to the price/earnings ratio (P/E), but unlike the P/E it factors debt into the equation.

One of the most useful aspects of the tool is that it also extracts the standardized measure (SM) for year-end 2013 and 2014. The SM is important for valuing oil and gas producers, sometimes referred to as the “upstream” sector. The Securities and Exchange Commission (SEC) requires oil and gas companies and partnerships to estimate the year-end value of their proved reserves in the annual report (10-K filing) — and that’s where they must usually be painstakingly extracted. The SM is defined as the present value of the future cash flows from proved oil, natural gas liquids (NGLs), and natural gas reserves, minus development costs, income taxes and existing exploration costs, discounted at 10% annually. The SM must be calculated according to specific guidelines set by the SEC.

Note that the purpose of this screening tool is to permit faster comparisons between similar companies. I am trying to remove some of the subjectivity and emotion from the investment process. But there is still a lot of art involved, as one company may have a much better outlook than other despite having similar metrics. Thus, the data must be interpreted. The industry outlook will also always be important. What is the forecast for oil and gas prices, for instance? Finally, there are often mistakes in financial data, even though Bloomberg is generally regarded as reliable. Mistakes will still creep in, and have to be recognized as such lest they result in misleading conclusions.

Finding the Next Acquisition Target

Last week Noble Energy said it would acquire Rosetta Resources at a ~30% premium. So which other companies look like Rosetta?

It just so happens that I ran the new screening tool prior to the announcement and subsequent rise in Rosetta’s price. On May 7, four days prior to the announcement, Rosetta was an oil and gas exploration company with an EV of $3.1 billion. So let’s use the screening tool to look at all publicly traded E&P companies worth $2 billion to $4 billion to see which ones look like Rosetta. (Of course we could just as easily ignore EV and instead focus on a different valuation metric.)

The screen initially identified 19 companies in this range, but Vanguard Natural Resources (NASDAQ: VNR), Memorial Production Partners (NASDAQ: MEMP) and Atlas Resource Partners (NYSE: ARP) are partnerships, and this results in some distorted financial metrics relative to the corporations on the list. Therefore, I removed those from the comparison. Cobalt International Energy (NYSE: CIE) also appeared on the screen, but it is much more in the “E” phase of the E&P, and therefore some of its metrics were vastly different from those of the other companies in the screen. I therefore removed it as well to end up with a final list of 15 companies: 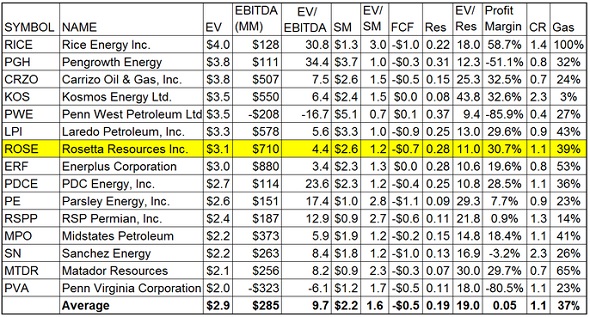 All dollar measures are in billions unless otherwise noted.

The implication of the SM is that an EV/SM ratio of 1.0 would only value a company at the present value of its projected future cash flows from proved reserves as of year-end 2014 (with the very important caveat that the commodity prices used in these calculations — the averages for 2014 — are higher than the current spot prices). The EV/Reserves number is a measure of how much an investor is paying for the proved oil and gas reserves in dollars per barrel of oil equivalent (BOE). Oil reserves are usually more highly valued than gas reserves; “% Gas” shows whether the company is predominantly an oil producer or a gas producer.

If we look at Rosetta’s financial metrics, we can see why it proved an attractive target for Noble. Rosetta traded at very low EV/EBITDA, EV/SM, and EV/Reserves multiples, yet its profit margin is higher than the group average, it doesn’t have a lot of short-term liabilities, and is primarily an oil producer. Rosetta’s EV/Reserves ratio of $11.04/BOE looks like a bargain for Noble, whose own ratio (not shown here) is $16.80/BOE.

Of course Noble also had strategic reasons for acquiring Rosetta — namely that Rosetta’s reserves are in the oil-rich zones of the Eagle Ford and Permian Basin. So while the screen above helps narrow down the list of companies that have similar characteristics to Noble, it is important to drill down another level to understand the quality of those reserves. For example, Enerplus has similar financial metrics to Rosetta, but it is a Canadian company with most of its reserves outside of the prolific shale plays with the best infrastructure and market access.

Laredo Petroleum (NYSE: LPI), on the other hand, has financials similar to Rosetta’s and prime acreage in the Permian Basin. However, Laredo is more leveraged than Rosetta, and it has a short interest of 19% versus Rosetta’s 12% prior to the acquisition (not shown in the table, but one of the metrics the spreadsheet extracts) — an indicator that more investors are betting that Laredo’s price will fall. Other companies on this screen with multiple attractive takeover attributes are Sanchez Energy (NYSE: SN), Carrizo Oil and Gas (NASDAQ: CRZO) and Midstates Petroleum (NYSE: MPO) — which it should be noted is a penny stock. Kosmos Energy (NYSE: KOS) has an attractive EV/EBITDA, but its reserves are scattered around the world.

The new screening tool we have developed uses the most recent and reliable source of energy company information. This tool greatly expands our ability to cover the entire energy space. After all, it would take a major effort to do detailed analysis on all 361 companies in the energy sector, but this new tool allows more automation of that process. That way, we can spend more time digging deeper into the narratives behind the most promising companies. I am unaware of any other stock screener that takes such a detailed and specialized view of energy companies, and I believe as I screen the various subsectors in upcoming issues that subscribers will agree.