Ball Back in OPEC’s Court

Pundits continue to handicap the direction of oil prices, which in turn continue to frustrate most pundits. While some feel strongly that shale oil production will keep falling for the rest of the year, driving prices back to $80/barrel, others argue that instead the massive crude oil inventories will drive prices back to $40/bbl.

I believe there is a much more significant catalyst for oil prices this summer and fall. On June 5 OPEC will hold its 167th Ordinary Meeting in Vienna, Austria. You remember, them, right? OPEC is the organization that many have argued is losing its grip on oil prices.

Overall, OPEC members produced 36.8 million bpd of oil in 2013. All they would need to do to cause another oil price shock would be to reduce their output across the board by 10%. The nearly 4 million bpd that would come off the market would quickly send oil prices back above $100/bbl.

Now, I don’t think they will do that at their next meeting. But I also don’t believe they want a repeat of the aftermath of their previous meeting last November. At that time oil prices had already suffered a sharp fall since summer, but crude was still trading at ~$75/bbl. Many expected OPEC to signal modest production cuts to stabilize oil prices. In fact, this was the strategy favored by Iran, Nigeria, and Venezuela. But Saudi Arabia still holds the most sway within OPEC as the sole producer with significant spare capacity, and it vetoed production cuts at that Nov. 27 meeting.

There are many explanations for why Saudi Arabia pushed this course of action: To punish Russia, to punish Iran, or to cripple U.S. shale oil producers. I think the real reason is that the Saudis don’t want to buck the message of the markets, and hoped to force the higher cost producers (i.e., the shale drillers) into bearing the brunt of needed output cuts. But I think the Saudis really underestimated how quickly oil prices would fall following their meeting: 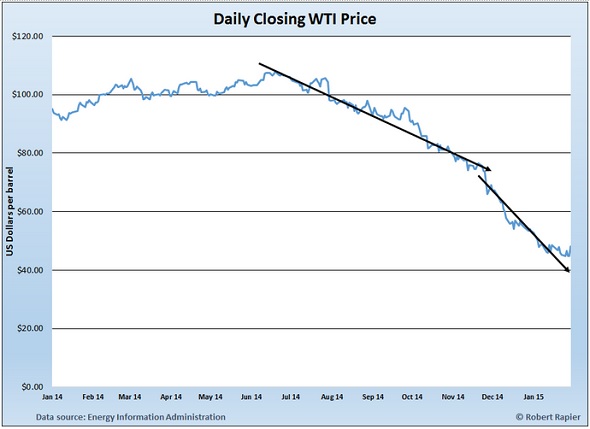 So instead of stabilizing at $70/bbl, the oil price drop accelerated toward $40. This did result in huge cuts in capital expenditures among the shale oil producers, but it also inflicted a lot of pain within OPEC. Today, with oil trading at ~$60/bbl I really don’t think the Saudis want a repeat of last fall’s dramatic drop.

When I try to anticipate what OPEC might do, I generally first ask the question “What would I do if I was responsible for making that decision?” You have to keep in mind that to OPEC, its self-interest is more important than the interests of the rest of the world. Members have to walk a fine line, because if they do drive oil prices back to $100/bbl, they know that countries will redouble their efforts to reduce oil consumption. The shale oil producers would also start to rapidly come back online.

So it seems to me that OPEC has three options, with the following consequences:

In any case, I expect that over the next three to four months OPEC’s action (or inaction) will drive oil prices more so than high crude oil inventories, falling shale oil production or growing global demand. Over the long term, average prices will approximately reflect fundamentals. Over the short term, OPEC will drive prices as it did following its previous meeting. After all, imagine that the decision at the November meeting was to cut production. Instead of sub-$50/bbl oil, they could have easily stabilized prices at $70/bbl. The risk to that strategy is that as long as shale oil producers are able to continue ramping up production, OPEC might have to continue to make cuts in order to prop up prices.

OPEC’s influence may have slightly waned over the past couple of years, but no other entity can still make such a huge impact on global crude oil prices — not even Russia or the U.S., each accounting for approximately 12% of global production. That output is spread across a large number of companies that are all responding to market signals. But OPEC is large, and possibly cohesive, enough to send the market a message if it so chooses.