A week from today we’ll be waking up stuffed with turkey and regret. “Was that second piece of pumpkin pie really necessary?” And, “oh gosh, it’s almost noon and I haven’t rushed to those Black Friday sales and done my patriotic duty to support the economy.”

I admit I once factored in holiday-shopping projections and post-Thanksgiving surveys into my view of the economy. After all, what better barometer of consumer confidence is there than measuring mob mentality, post-Thanksgiving?

But as satisfying as a Walmart stampede is, schadenfreude-wise, and as compelling as those early shopping stats are, they carry as much weight as a snowflake.

Our brains crave certainty and hate ambiguity, so we’re eager to fill in vacuums with information no matter how dubious.

When it comes to holiday retail sales, money manager and commentator Barry Ritholtz nailed it last year when he said they’re “a combination of a retail trade group that cares little for accurate economic data, a terrible survey methodology and a naive and lazy news media, which seems to believe its role is to mindlessly repeat whatever nonsense is peddled by the aforementioned trade group.”

The trade group in question is the National Retail Federation, which is projecting sales in November and December (excluding autos, gas and restaurant meals) to increase “a solid 3.7%.” Sometimes the NRF is close, sometimes it’s not. In 2012, for example, it predicted a 4.1% increase, overshooting the actual 3% by a wide margin.

The NRF also said that the last Black Friday was a disaster, with sales down 11%, which was dutifully reported by media from the New York Times to the Wall Street Journal. Was it such a disaster? That’s hard to say, given that figure is based on notoriously inaccurate surveys of shoppers. And sales over the Black Friday weekend are no indication of total holiday sales, a fact proven repeatedly, including by this chart tweeted by Jim O’Sullivan, the chief economist at High Frequency Economics. 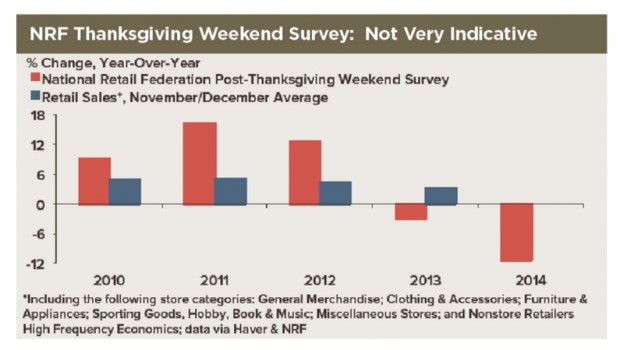 How consumers are spending is an important measure, of course, especially these days. We’re all waiting for lower unemployment to translate into stronger spending, which will be a meaningful measure that this recovery has moved beyond tepid.

Based on real numbers, not holiday-spending, hocus-pocus forecasts, we’re still stuck at tepid:

To these numbers we can factor in holiday spending to get a more complete picture—but let’s wait until January when the actual numbers are released.