On Sale While Supplies Last

After enduring back-to-back annual losses, energy investors are wondering if the market will turn the corner in 2016. Excessive crude oil supply began to manifest in early 2014. OPEC’s November 2014 decision to defend market share — which I discussed in a recent appearance on CNBC Asia’s Squawk Box — hit the energy sector hard in 2015. Those negatives continue to hang over the oil markets in 2016.

While shale oil production started to decline last year, it didn’t do so as quickly as OPEC expected. Nevertheless, prior to OPEC’s 2014 meeting there were 1,600 rigs drilling for oil in North America, and today there are 516.

Global demand also continues to rise. Last year the International Energy Agency (IEA) reported that oil demand was growing at the fastest rate in five years. How will we know when the market begins to turn the corner? Look to global inventories. 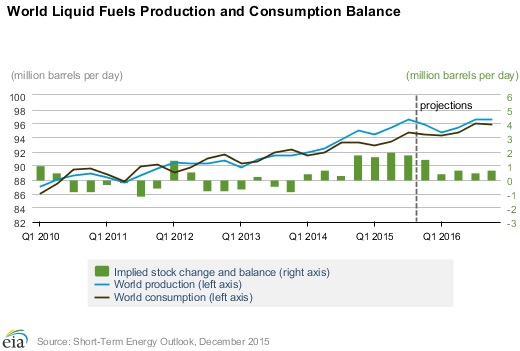 Note that the EIA is projecting that global production will reverse very recent declines and grow once again in 2016. But that’s because the agency is forecasting higher oil prices. EIA forecasts that Brent crude will average $56/bbl in 2016, and that WTI prices will average $51/bbl — about 70% higher than current prices. Note that if the EIA is wrong and production doesn’t begin to rise (which I think will be the case for at least the next six months), then global inventories should start to come down, eliminating one of the major downside risk factors for oil prices.

Until that happens, the potential for further declines remains. Oil could spend some time in the $20s, but the longer prices remain below an economical level, the harder they are likely to swing in the other direction. I expect inventories to peak and begin to decline around mid-year, and then oil prices should make a quick move back above $40/bbl.

There is no question that today’s oil price is unsustainable. The world’s oil supply will not meet global demand over the next few years at $30-35/bbl. Producers will need a higher price before they will invest sufficient capital to ensure that future demand is met. For now, drillers will try to hang in and survive until the market comes back into balance.

How should an investor play this uncertainty? Look to companies with strong balance sheets, and start to average into the market. Buying now while others are fearful should pay off eventually. But do average in to limit your downside risk, and be prepared to be patient. It is likely that a recovery is still at least months away.

Which companies are the safest bets? Join us at The Energy Strategist as we analyze the latest corporate data. We will highlight companies with strong balance sheets and stocks that have already priced in the worst-case scenario.