Gas Giant on the Prairie

The Permian Basin has commercial deposits of oil and gas in stacked layers, at depths ranging from 1,000 feet to more than 25,000 feet. One horizontal shale play within the Permian called Wolfcamp is estimated to contain 2 to 4 times the estimated oil reserves of the Eagle Ford or the Bakken. And there are multiple commercially viable layers of oil and gas above and below Wolfcamp.

Thanks to those stacked layers, the Permian is one of the most prolific and cost-effective oil plays in the U.S. Last week I visited to see things first hand.

In my day job I serve as director of alternative fuels technology for a small Arizona technology company. One of our core technologies is aimed at reducing natural gas flaring in oil fields. As shale oil production in the U.S. boomed, so did the volumes of associated natural gas. But there was often no infrastructure to process it. As a result, that natural gas was often flared.

Why would you flare something of  value? As I heard one producer explain it, “The associated gas on my site has a market value of $600,000, but it will take at least $1.5 million in infrastructure to move it to market. So I flare it.”

Governments have sought to restrict the practice to protect the environment, even as they worry about curbing the tax receipts from oil production. Amid a worldwide clampdown on flaring, oil producers already suffering from the energy slump face the high cost of complying with the new restrictions.

That’s where we come in. We have developed a unit that conditions flared gas to efficiently fuel a generator. If a site is using diesel for power — as many are — our solution can cut the flaring while reducing or eliminating diesel consumption. We deployed our first demonstration unit to the Eagle Ford in Texas last year. The second unit went to the Bakken, and I reported on a visit there in Addressing the World’s Flare Gas Problem. Our third unit is deployed in the Permian Basin in West Texas, and last week I made a visit to see it: 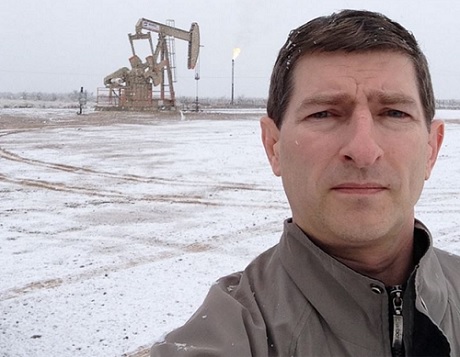 Me at a well site in the Permian Basin, south of Pecos, Texas on Jan. 26.
Yes, that is snow on the ground and in my hair. Our target is that flare behind me.

Trips to the key oil and gas regions of the U.S. give me a chance to talk not only with the men and women who extract oil and gas but also with people up and down the supply chain: oilfield services providers, midstream companies, etc. I even sat down with officials from the Bureau of Land Management in Carlsbad, New Mexico to get their take on the current oil and gas markets — especially as it relates to the Permian Basin.

One of the things I do on these trips is to note the companies most actively engaged in a region. The Permian probably has the most developed infrastructure of any major U.S. oil basin, but in the past few years drilling has pushed into many new areas. As a result, there was abundant evidence of new infrastructure in the process of being built. As we drove around the Permian, I saw a number of midstream companies in operation, including Plains All American Pipeline (NYSE: PAA), Energy Transfer Partners (NYSE: ETP), Enterprise Products Partners (NYSE: EPD) and Targa Resources Partners (NYSE: NGLS).

A Fixture in the Permian

But at least in the regions I drove through, the midstream company with the most visible presence was DCP Midstream Partners (NYSE: DPM). Its general partner, DCP Midstream (DCP), is a 50/50 joint venture of Phillips 66 (NYSE: PSX) and Spectra Energy (NYSE: SE). In aggregate with DPM, DCP Midstream is the largest producer of natural gas liquids (NGLs) in the U.S., as well as the largest natural gas processor. DPM gathers or processes about 12% of the U.S. gas supply. 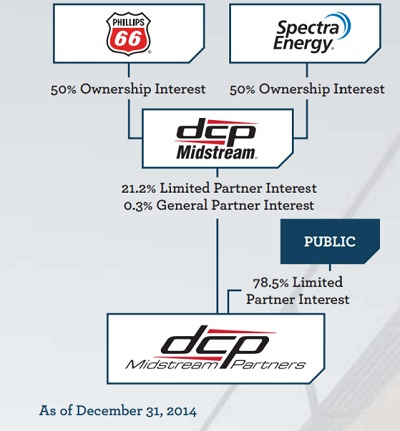 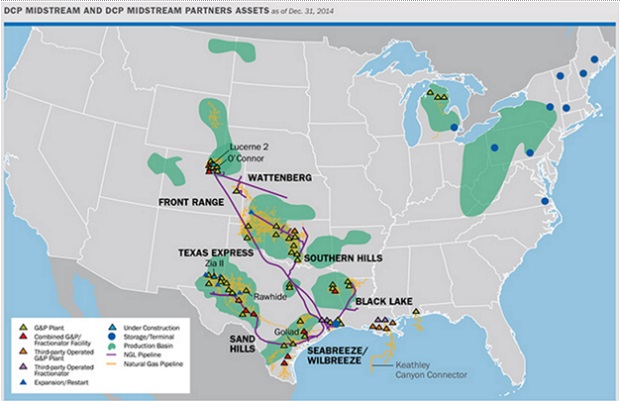 DPM didn’t escaped the carnage in the MLP space over the past year, its unit price dropping nearly 50% over the past year. But the underlying performance of the business has been good. Despite weak NGL prices, DPM managed to increase production while reducing costs in 2015. This meant the company generated enough cash to fund its distribution with a coverage ratio for the past year of 1.13x (and 1.21x in Q3).

My colleague Igor Greenwald wrote last March in a note to subscribers:

“Unless NGL prices recover significantly, either DPM or its general partner may still need a capital infusion from (most likely) Phillips 66, which can afford it and is unlikely to devalue its stake in the venture by leaving it ailing. What’s not in doubt is DPM’s staying power. It should be able to at least maintain the current distribution if NGL prices don’t drop much further.”

Of course DPM did maintain its distribution, and another note to subscribers in September reported on the the capital infusion:

“On another tough day for energy equities, at least one was granted a reprieve. DCP Midstream Partners (NYSE: DPM) units appreciated more than 6% Wednesday. Business didn’t improve, because the energy prices on which it depends sagged once again. But at least DPM’s indirect corporate parents finally came through with a long awaited aid infusion.

The DPM publicly listed partnership is now almost fully shielded from commodity price risk for the balance of this year and mostly protected (locking in 80% or so of its cash flow) for 2016. But its general partner, a 50/50 joint venture between Conservative Portfolio recommendation Spectra Energy (NYSE: SE) and Phillips 66 (NYSE: PSX), is much more exposed. It lost its investment-grade credit rating earlier this year as a result, casting doubt on  DPM’s growth prospects.

The infusion of $1.5 billion in cash from Phillips and one-third stakes in two natural gas liquids pipelines from Spectra will keep DCP Midstream on the good side of its credit line covenants and more than cover its expected cash outflows over the next year.”

The Permian Basin has been producing oil since the 1920s, and nearly 100 years later it is producing at near record levels. High oil prices in recent years resulted in a new oil boom in the Permian, and that has been accompanied by large investments in infrastructure. On my recent trip there I noticed a lot of pipeline construction to connect newer oil and gas wells to existing infrastructure. One of the companies most active in the region is DCP Midstream, which is one we have covered here in the past. To receive our current advice on DCM, please join us at MLP Profits.