Making Sense of the Rally

The past 18 months have been challenging for MLP investors. But we mustn’t lose sight of the fact that the objective is to buy low. That means shopping while sector sentiment is weak (hence the low prices). So today I want to step back and take the long view on the sector’s performance over the years — which I believe shows that today’s prices reflect strong buying opportunities.

Consider the historical performance of the Alerian MLP Index, which provides a good measure of the overall health of the MLP sector. It is a composite of the 50 most prominent energy master limited partnerships accounting for approximately 85% of the MLP sector’s total float-adjusted market capitalization. The index is disseminated on a price-return basis (AMZ) and on a total-return basis (AMZX).

At present, the top 10 constituents of the AMZ are:

Before the 2014 downturn, the AMZ had significantly outperformed the S&P 500 for more than a decade. From 1996 until 2001, the S&P 500 was the better performer, but between 2001 and 2014 the AMZ opened up a significant performance lead. Only once prior to the 2014 correction had the AMZ pulled back to the historical performance level of the S&P 500, but shortly after that 2008-9 correction the AMZ again began to substantially outperform the S&P. The chart below shows the price return of $100 invested in these indices on Jan. 1, 2006. 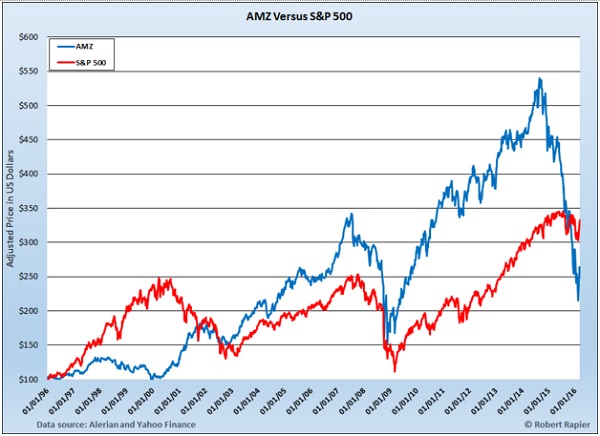 The current correction has now dropped the AMZ well below the 20-year performance of the S&P 500, but a different picture emerges if we look at the total return (i.e., including dividends and distributions over that time). The annualized yield of the AMZ over that time frame has tended to be in the 6-8% range, while the S&P 500 was typically at or around 2%. That makes a big difference to the return over time: 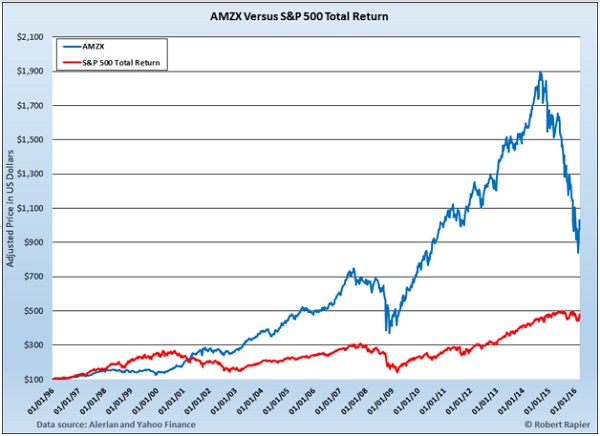 In this case, it becomes clear that despite the large correction, an investor would still have been substantially better off in the AMZ over the past 20 years. This is small comfort to  investors who first invested in the sector three years ago, but corrections like this create opportunities. The MLP sector is cheaper than it has been in years, but it isn’t likely to remain this cheap for long.

As I pointed out in December in The Loud Message of Fat Yields, whenever the AMZ yield has risen above 10% in the past it subsequently proved to have been a good buying opportunity. When the AMZ yield exceeded 10% in December 1999, the next 12 months saw a total return of 46%. When the yield rose above 10% in December 2008, the following 12 months notched a total gain of 76%. In mid-January and mid-February of this year, the yield rose above 10%, but it has since pulled back to 8.7% as the sector has rallied.

If history is any guide, today’s MLP prices signal a buying opportunity that only presents itself every few years. But some MLPs are in better shape than others at this stage of the energy bear market. Join us at MLP Profits to find out which MLPs are likely to outperform as the sector rallies.