Natural gas prices began to decline ahead of the oil price crash that started in the summer of 2014. Some of the reasons for the declines in both commodities are the same (explosive growth in shale production), but natural gas prices are also highly weather sensitive. The spike in early 2014 happened in response to an unusually cold winter that drew down natural gas inventories to historically low levels, but then mild summers and winters followed.

The moderate weather allowed the depleted natural gas inventories to replenish at a rapid pace, and that’s kept downward pressure on prices. Natural gas storage levels returned to normal by January 2015, and by September 2015 they were approaching historically high levels — where they remain today: 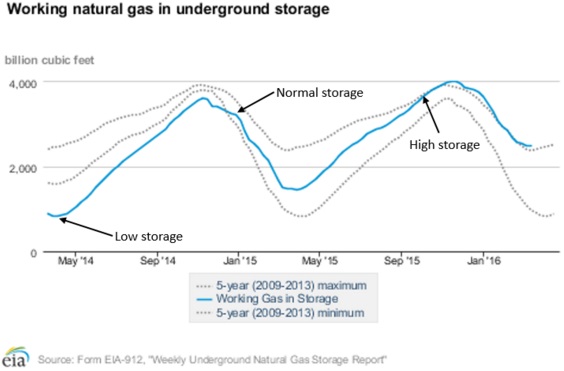 Natural gas demand growth has been robust, it’s just that it has lagged behind supply growth. There are a number of long-term drivers for natural gas that should ensure strong demand growth for several more years. Last week the Energy Information Administration (EIA) highlighted one of the key demand drivers in Today in Energy:

The graphic illustrates the important role natural gas has played in the decline of the U.S. coal industry. The EIA projects that this year natural gas will supplant coal for the first time ever as the nation’s leading power source on an annual basis.

This may come as a surprise to environmentalists that have been quick to highlight the role of renewables in the coal industry’s woes. While renewables have indeed made a contribution, it pales in comparison with the damage the shale gas boom has inflicted on the coal industry.

Note that the shift in the power sector is only one driver of increasing natural gas demand. There are huge new investments underway in the chemical manufacturing that will further boost demand. The University of Texas’ Center for Energy Economics has estimated that new petrochemical projects will boost industrial demand for natural gas by 19% to 31% by 2020.

There are additional demand drivers such as new liquefied natural gas (LNG) export terminals. The EIA estimated in a 2012 report that 12 billion cubic feet per day of natural gas exports would increase domestic natural gas prices by more than $1.50/MMBtu.

Two years ago, I warned of near-term downside for natural gas if production growth significantly outpaced demand. That is indeed what happened, primarily due to the moderate weather. But note that since 2000 natural gas prices have rarely dropped below $2/MMBtu, and every time that happened prices subsequently rebounded above $5/MMBtu.

I don’t expect the current situation with natural gas to be any different, especially considering the coming demand drivers, which in addition to the growing power consumption, LNG exports and petrochemical demand include rapidly rising exports to Mexico. Natural gas production growth has been robust for a decade, but current prices have caused output growth to flatten. The inevitable result will be higher prices, and big gains for North American natural gas producers.

This outlook is reflected in our portfolios for The Energy Strategist. Join us for these recommendations, including our current #1 rated Best Buy which is one of the lowest-cost producers in the most important shale gas play in the country.

I’ll be discussing this recommendation and others in May at our annual Wealth Summit conference, held this year in Las Vegas. It’s a great way for me to meet subscribers one-on-one, and there are still spaces open if you’re interested. Also this year I’ll be making a special recommendation to those who attend the summit, and to those who are members of our Wealth Society. (WESO members receive all the Investing Daily newsletters and other premium services.)

For me it’s a fun exercise because there are no rules. I’m not bound to recommend energy stocks. Nor am I allowed to reveal the pick in The Energy Strategist. But I’d love to discuss it with you in Las Vegas.