Cypress Not Shaken by Oil Quake

According to the Energy Information Administration (EIA), hydraulic fracturing, or “fracking”, is now responsible for over 50% of U.S. oil production: 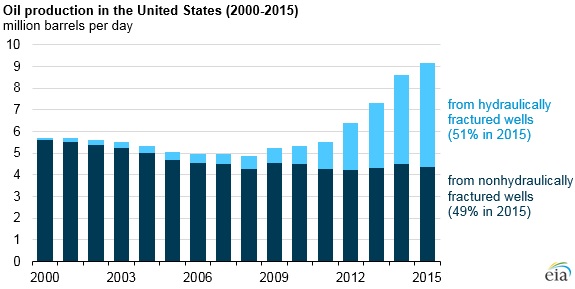 But the growth in fracking hasn’t been without controversy. There is a widespread belief — albeit almost entirely unfounded — that fracking is putting our drinking water at risk. Some have even claimed — again with little basis in fact — that natural gas is worse than coal when it comes to climate change because of methane leaks that take place during production.

While I am confident, based on the scientific studies I have reviewed, that neither of these claims is supported, one thing that does seem to be true is a claimed link between fracking and earthquakes. There seems to be at least a correlation (but maybe a causal link in Western Canada). My home state of Oklahoma now has more earthquakes than California, and that doesn’t appear to be a coincidence.

Fracking requires millions of gallons of water to be pumped deep underground at high pressure to fracture the rock containing the hydrocarbons. Some of that water flows back to the surface, and must be disposed.

There are several options for dealing with the water that flows back to the surface, but in many cases the water is simply injected back underground. It is the disposal of this wastewater that is most likely causing the uptick in earthquakes, according to a peer-reviewed study from Stanford University. When that water is injected near a fault, it is postulated that it can cause the fault to move — triggering an earthquake.

As a result, states have begun to target underground wastewater disposal for elimination. For example, the Oklahoma Corporation Commission has asked oil companies to reduce the volume of wastewater pumped through disposal wells. Homeowners are also filing lawsuits against oil companies as a result of earthquake damage to their property.

But if underground disposal begins to be restricted, what other options are available to oil companies? Actually, there is an MLP for that. (I might add that treatment of fracking wastewater and water produced during oil and gas production are issues I am working on at my day job.)

In last week’s issue, I discussed the upstream MLPs. As I warned, they are quite volatile. An alternative for investors looking for exposure to the upstream space could be one of the so-called “fracking enablers.” These are companies that provide services to upstream producers. Examples are sand providers (sand is used in fracking to hold open the fractures) or companies that handle wastewater disposal.

An example would be Cypress Energy Partners (NYSE: CELP), which provides saltwater disposal and other water and environmental services to onshore oil and natural gas producers in North Dakota and West Texas. The partnership also has a pipeline inspection and integrity services division.

Cypress went public in January 2014 as the first MLP specializing in water and environmental services and pipeline maintenance. The partnership has seven saltwater disposal facilities in the Bakken in North Dakota and two in the Permian Basin in Texas. The facilities receive a fee for each barrel of fracking wastewater or produced water that is disposed, and derive additional revenue from sales of the residual oil recovered in the process.

Cypress wasn’t spared the downturn in the oil and gas industry, but neither did it suffer the 50%-plus decline of every oil and gas production MLP over the past year. Cypress is down about 40% over the past 12 months but, again unlike most of the upstream MLPs, it managed to keep its distribution stable in 2015, while nearly matching 2014’s distributable cash flow (DCF).

For all of fiscal 2015, Cypress reported:

As Cypress notes, lower oil prices have hit its wastewater disposal business. In Q4 2015 the partnership disposed of 4.3 million barrels of saltwater at average revenue of $0.68 per barrel, which was down 36.4% from the prior year per barrel average of $1.07. Cypress warned of the risks of asset impairments over the next few quarters unless commodity prices rebound.

However, the partnership indicated that it remains well within its debt covenants. Cypress reported a leverage ratio of 3.07x versus a covenant limit of 4.0x, and interest coverage ratio of 4.84x versus the covenant of 3.0x as of Dec. 31. These ratios provide some assurance that Cypress can survive this downturn.

Make no mistake — this is a very a risky space. But if you are looking for some MLP exposure to a recovery in oil prices, Cypress Energy Partners may be a safer bet than directly owning one of the driller MLPs.