On Sunday members of the Organization of the Petroleum Exporting Countries (OPEC) met in Doha, Qatar. Also attending the meeting were Russia, Mexico and five other non-OPEC producers. Cumulatively, these countries are responsible for about 75% of the world’s oil production, so the proposed agreement among them to freeze oil output at current levels could have given a big boost to oil prices.

But the meeting produced no such deal, much less an agreement on production cuts to address the crude oil market’s current oversupply. This was no surprise, particularly given the comments out of Iran ahead of the meeting signaling that country’s determination to increase output.

At my recent presentation at the InvestFest Conference in San Antonio, I showed the following graphic detailing what happened the last three times OPEC met: 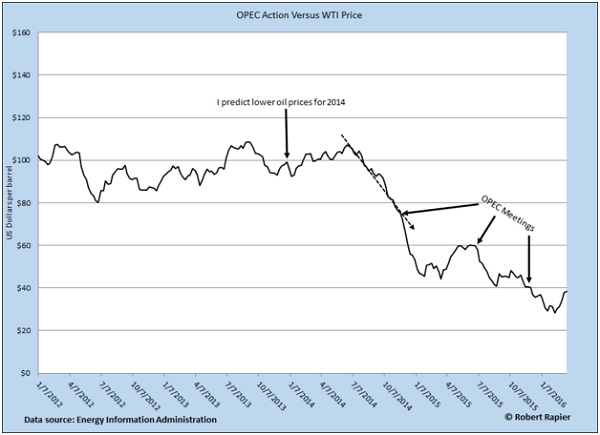 Following the November 2014 meeting at which OPEC decided to defend market share instead of balancing the market, the oil price plunge that had started in the summer of 2014 accelerated. There have been two more “ordinary” meetings since then, and each time OPEC reiterated its strategy and oil prices fell in short order by $15-$20/bbl.

Note in the graphic above that I forecasted lower oil prices in 2014 in the annual predictions I made in January. I did so on the basis of the fundamentals. Crude production was surging and inventories rising. Nevertheless, prices rose for another six months before traders broadly recognized the oversupply risks, and when they did oil prices fell hard. I was correct based on the fundamentals, but looked wrong for six months because short-term market psychology was against me.

These oil price moves aren’t a function of the real-time fundamentals of supply and demand in the oil market, but are rather based on the sentiments of oil futures traders. Over the long term, the fundamentals will win out, but expectations drive the short term. As such, I think there is immediate downside risk in the aftermath of the Doha meeting.

While the pieces are in place for the oil market to balance in the second half of this year, for the moment it remains oversupplied. Yet traders have bid up oil by 50% since the February lows in anticipation of a tipping point for inventories. Since the Doha meeting will not restrain production, prices could quickly retreat as they have following the previous three OPEC meetings.

But OPEC isn’t the only factor in oil prices. U.S. production is declining in earnest, and U.S. inventories typically decline between this time of year and the end of summer. Meanwhile, force majeure has been declared by ENI (NYSE: E) and Shell (NYSE: RDS-A) on two grades of Nigerian crude, removing nearly 400,000 barrels per day of global supply.

Thus, the market may come into balance even faster than expected. Should oil retreat in the wake of the Doha meeting or the next OPEC meeting in June, investors should view those pullbacks as buying opportunities. Higher prices are on the horizon.