“In the great green room, there was a telephone, and a red balloon, and a picture of a cow jumping over the moon” — Margaret Wise Brown  in children’s classic Goodnight Moon

All joking aside, I confess to having been amused by Donald Trump’s run for the presidency. I just didn’t take it seriously, and I assumed that ultimately neither would the American public. But now that Trump has won the Republican nomination, it looks like I will have to seriously consider the possibility that he could be our next president. Thus, I must start to look at his energy policy ideas, even as he expresses those ideas at the level of a Dr. Seuss classic. For balance, I have looked at Hillary Clinton’s energy policies from time to time in the past, and will continue to do so leading up to the election.

I think it’s important to pay attention to the way the political winds are blowing, as those can have a big impact on the energy sector. President Obama funneled a lot of money into renewable energy, and many green companies benefited. The shale revolution also happened mostly on Obama’s watch, though his policies can hardly be described as helping.

I don’t think there is any question, given the comments Trump has made on the topic, that a Trump Administration would be favorable to the fossil fuel industry. Republican congressman Kevin Cramer of North Dakota is Trump’s key energy adviser, and he has emphasized the dangers of foreign ownership of U.S. energy assets, burdensome taxes, and overregulation. But can he save the coal industry? Is clean coal the answer?

Coal is in decline for many reasons that go beyond the Obama Administration’s regulation of the sector. The single biggest reason can be seen in this slide that I showed earlier this month in Las Vegas at Investing Daily’s annual Wealth Summit: 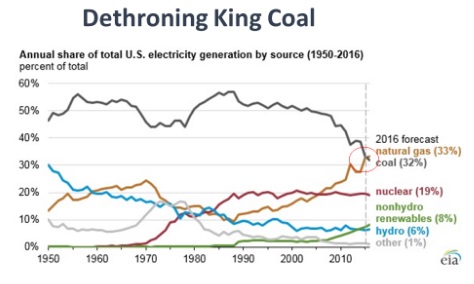 Almost all of coal’s market share losses in the power sector since 2000 can be explained by increased natural gas consumption. That, in turn, is mostly a reflection of how cheap and how clean natural gas is relative to coal. The desire to burn natural gas because it is cleaner is of course influenced by regulations, but those regulations are in place at the local, state, and federal levels. There are also many international regulations and global agreements influencing coal’s future, so it would be a very tall order for a Trump Administration to roll all of that back.

There are policies that he could implement that would have immediate, positive impacts on specific companies and sectors. Approving the Keystone XL pipeline — as Trump has promised to do — is one potential example. But he isn’t going to save the coal industry by rolling back environmental regulations, nor by implementing clean coal technologies.

So what does all of this mean? Frankly, I still don’t believe Trump will win, but we will be watching developments closely so we can plan accordingly. But whether he wins the election won’t much affect our views on coal or the composition of our portfolios at The Energy Strategist. And why isn’t clean coal the solution that Mr. Trump seems to believe? I will tackle that question in next week’s article.