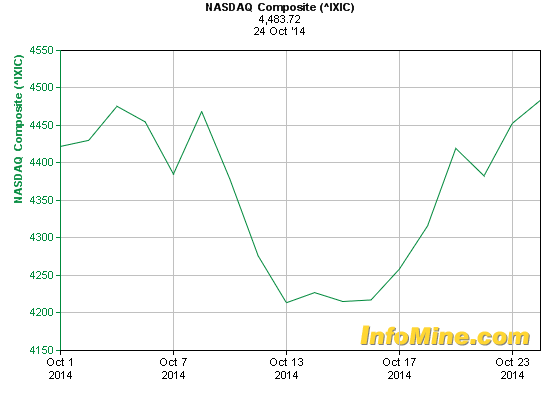 In both cases, you’d be correct. One of the reasons why October has historically been one of the most volatile months of the year is that it is the month when most companies release third quarter earnings, which tend to determine whether or not a company will be able to hit is full-year earnings expectations.

If a company has fallen too far behind by the time three-quarters of the year is over then it is almost impossible to make up for it in the fourth quarter, unless it is the type of business that does the vast majority of its business during the holiday shopping season.

Even then, seasonality is already built into earnings expectations making it very difficult for most companies to exceed already high fourth quarter sales expectations. That’s why a lot of companies are looking overseas, primarily to Asia, for growth opportunities.

Most Americans are pretty much filled up on the gadgets they can buy. Yes, some insist on having the latest iteration of an iPhone or video gaming system, but in the overall scheme of things that isn’t a very good strategy for growth.

That’s why many businesses are becoming increasingly reliant on sophisticated marketing analytics to show them precisely where they can earn the highest ROI on their capital expenditures. The penalty for guessing wrong is too severe, and the rewards for guessing correctly are substantial.

In today’s Next Wave Portfolio Update, Rob DeFrancesco reviews a very strong third quarter earnings report from one of his favorite recommendations, and explains why this ambitious company may be perfectly positioned to cash in on this trend for years to come.

The latest quarterly numbers out of Marketo (MKTO) offer more proof that the company continues to sit in the sweet spot of engagement marketing. Revenue in the third quarter rose 54%, billings advanced 50% and the addition of 140 new customers brought the company’s installed base up to nearly 3,500.

More organizations are turning to Marketo after realizing that it’s now much more important to develop relationships with their customers instead of simply talking at them through advertisements.

Marketo handles clients in both its core business-to-business (B2B) market as well as those focused on the business-to-consumer (B2C) segment. In B2B, Marketo, considered a leader in lead nurturing, is adding new customers and expanding relationships within its largest accounts. On the B2C side, the company continues to build out its base, as more clients seek to improve engagement with their own customers.

Marketo’s cloud-based marketing automation solutions are increasingly being placed in the center of a client’s revenue-generating activities, according to CEO Phil Fernandez. For example, Marketo’s Revenue Cycle Analytics solution provides critical data to top management, including the percentage of an organization’s deal pipeline being generated by marketing activities and the average deal velocity across various sales teams.

In Q3, revenue of $39.3 million topped the consensus estimate of $37.4 million as well as the high end of the company’s guidance range of $36.5 million to $37.5 million. Deferred revenue was up 74% year over year to $53.2 million. A clear sign of happy customers: Marketo’s subscription dollar retention rate in the latest quarter hit 108%, up from 105% in the second quarter.

Marketo’s newest product offerings, including Real-Time Personalization (RTP), continue to gain traction. With RTP, a client can interact with targeted individuals via personalized communications through email, mobile and the Web in order to drive up content consumption and conversion rates. For example, an organization can come up with a loyalty behavior scorecard (separating customers likely to make additional purchases from those more likely to churn off) and then send various types of personalized messages to individual accounts.

Marketo’s latest solution, Marketing Calendar, debuted in Q3. It allows marketing teams to plan and launch campaigns from a single platform. With Marketing Campaign, clients are better able to coordinate the schedules of individual components of various marketing efforts across multiple channels.

As Marketo gets bigger and a greater number of larger organizations see the need for marketing automation, the company is adding more enterprise accounts. In Q3, enterprise business represented 28% of Marketo’s subscription revenue.

The recent hiring of Steve Winter as executive VP of worldwide sales is intended to help Marketo extend its presence to new global markets (international revenue currently represents about 16% of total revenue) and expand its reach into more global enterprises. Winter has more than two decades of experience in the software industry. Prior to joining Marketo, Winter spent nine years in various leadership positions at SAP (SAP); his last role there was global head of Customer Line of Business Organization.

When it comes to battling it out for larger deals, Oracle (ORCL) is the only real competitor on the B2B side, mainly through an enterprise licensing strategy, according to Fernandez. In larger B2C deals, Fernandez says Marketo is seeing ExactTarget, a unit of Salesforce.com (CRM), with increased frequency, particularly in certain verticals such as consumer packaged goods. As for smaller deals, Salesforce’s Pardot unit continues to be the main competition.

Marketo remains a ‘Buy’ in the Next Wave Portfolio up to $30.

Oracle is a ‘Hold’ in the Investments Portfolio.

Apple (NSDQ: AAPL) reported $39.3 million iPhones sold, up 16 percent, in the fiscal fourth quarter, helping it rake in $42.1 billion in revenues for the quarter. This beat the company’s own guidance of $40 billion.

While the company sold more units of iPhones, it also realized an average selling price of $603 per unit, $42 higher than the prior year.  During the quarter, Apple also sold a record-high 5.5 million Mac units. However, units of iPads only sold 12.3 million units, 13 percent less than last year. Unlike smartphones, which users seem to upgrade more frequently, the company is still working to convince customers to upgrade their tablets as well.

Apple remains a ‘Buy’ in the Investments Portfolio up to $95.

Although the company added 2 million new wireless users during the quarter, average revenue per phone fell 8 percent. Wireless service revenue was flat for the quarter. Management reduced its revenue guidance range for full-year 2014 to 3 percent to 4 percent, down from a prior outlook of 5 percent.

AT&T remains a ‘Buy’ in the Investments Portfolio up to $39.

CA Technologies (NSDQ: CA) reported fiscal second-quarter 2015 revenues fell 2.4 percent to $1.08 billion due to a drop in its legacy Mainframe software sales. The drop came primarily from its subscription and maintenance revenue for the business which fell 2 percent to $610 million. The company’s Services segment revenues fell 6 percent to $91 million.

Microsoft (NSDQ: MSFT) reported fiscal 2015 first quarter revenue of $23.2 billion, a 25% improvement over the same period in 2013. However, diluted earnings per share of $0.54 were 13% less than an in 2013 due in large part to one-time costs associated with a restructuring plan and the acquisition of Nokia Devices and Services.

More importantly, the numbers support management’s emphasis on a cloud-first strategy, which is viewed as critical to the company migrating away from primarily an enterprise software vendor. The stock price jumped up 3% on the news.

Verizon Communications (NYSE: VZ) reported third-quarter EPS of $0.89, up 15.6 percent from $0.78 in the third quarter of 2013. Total revenues rose 4.3 percent to $31.6 billion with its wireless business continuing to drive the company’s overall growth.

Total revenues for the wireless segment rose 7 percent to $21.8 billion. Verizon added 1.53 million net retail connections to 106.2 million at the end of the quarter.

Microsoft is a ‘Buy’ up to $42 in the Investments Portfolio.