Verizon, We Can Hear You Now!

Going into last year the STI team sat down and made the recommendation as to which stock was our projected pick for top performer in the tech industry. In December of 2013 we chose Apple, Inc. (NSDQ: AAPL) as “The One Tech Stock to Own in 2014” and the stock did very well, and has continued to perform well in 2015. Apple books roughly 90% of ALL profits for the entire sector, and therefore it is a very solid stock.

What we wanted to talk about this month, however, was our number two pick from that same article. Just as Apple has dominated the mobile technology sector, Verizon dominates the mobile telecom sector. We ultimately chose Apple because we believed selling physical and virtual products provides for greater revenue and profit growth over the shorter run, which has proven true.

Both companies made our short list not simply because they are number one in their sub-sectors but also because they each have a clear innogration strategy that is being executing with a vengeance. In short, both companies innovate as well as integrate technologies into their core products and services. We use the term “innogration” to denote the key strategic ingredient that tech companies must have. Again, not for the short term but to be the category killer type stocks which we look for in our STI 50 tech stocks portfolio.

Verizon recently made an announcement which many analysts are feverishly working to distill what this means for Verizon’s future. We have been waiting for Verizon to make their next move in their strategic plan and this news was it. The announcement centers on Verizon’s selling off all of their old copper telephone lines (except those that are on the east coast of the US) to Frontier Communications (NSDQ: FTR) and few other odds & ends to raise about $15 billion.

In one sense the sale is cleaning out what Verizon picked up in prior purchases when they built out the largest and most robust U.S. cellular network. Verizon had picked up what in the tech industry are called Plain Ordinary Telephone Service (POTS), or copper loops which provided the voice grade communications that existed prior to Voice over IP (VoiP) which is basically voice over the Internet.

The cleanup was not simply an activity for their accountants to trim non-strategic businesses off their balance sheet however. Verizon had outrun their competition with investment to create the largest and most robust cellular network. In order to accomplish this Verizon partnered with UK-headquartered Vodafone Group plc (NSDQ: VOD). 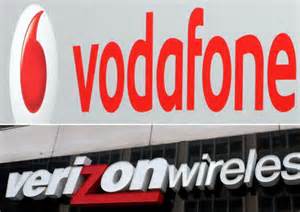 The enormous success of the investment left Vodafone with a 45% stake in Verizon, which Verizon bought back a few months ago. Despite Verizon being a veritable cash machine, the impact of the buyout created debt and cut into Verizon’s once enormous cash pile. Therefore the first takeaway for an investor should be – Verizon got a bunch of that cash back.

The second takeaway is that Verizon is executing an innogration strategy NOT to be the AT&T of the 1940’s and 1950’s. Rather, Verizon is looking to become the leading 21st century media company. Like Apple, Verizon is not seeking to own the creation in digital media, but rather to be the major conduit to and from all of the digital media being created today.

POTS also require a lot of maintenance, which is fine so long as customers still use that technology. And POTS is still more stable than VoIP, but it costs more. I pay $5 a month for my home office line today with unlimited US long distance. That is simply the taxes for a POTS line without the long distance plan or charges. Therefore, strategically it makes complete sense for Verizon to get out of a limited future non-core business.

We expect Verizon over the next few years to trim off their east coast POTS holdings and book additional cash to their ledger. POTS are still lucrative and this is why Frontier is buying them anytime they come up for sale. By leaving the POTS business more slowly, Verizon will be booking additional cash flow on top of their mobile telecom empires cash machines receipts.

As I mentioned earlier, innogration is innovation plus integration. The smarter tech companies go the next leg which is to constantly manage their cash flow on top of a world class innogration strategy. Apple produces profits while delivering the leading edge products which work the best. Therefore, Apple’s products are more stable than Samsung’s.

Verizon is moving into the Mobile Media sector not with a single bet but with a multi-pronged approach. Verizon’s “bet the ranch” gamble was years ago when they built out the best mobile network (FiOS). They hedged that bet with the Vodafone partnership.  Now they are moving away from the cost of that partnership gradually, while still paying a healthy dividend and booking big profits. This is the hallmark of a great innogration strategy.

With Vodafone’s stake now moving into Verizon’s rearview mirror, what lies ahead for the 800-pound gorilla in Mobile Media Telecommunications? There are places which have little to no coverage for mobile technologies; satellite providers such as DirecTV are in those market segments today. Look for Verizon make a play for one of those companies as it rounds out its portfolio of services to include mobile, cable and satellite.

Satellite and cable technologies are not sexy but they do generate handsome profits. Look for Verizon to buy these off-ramps for the digital highway and then move to modernize them. In other words, Verizon may already have technology which can reduce operator expense while improving speed and quality. This is Verizon working to be the equivalent of McDonald’s from the 1950s, when they bought up the valuable real estate closest to the newly built interstate highway system.

Verizon wants their customers to pay them for access to all of the digital products available today. The content is doubling at a very high rate and the category killer will win by providing the most content reliably, while generating profits. Verizon is looking to do what Amazon is doing in terms of controlling space, BUT in contrast to Amazon do it very profitably.

Verizon has gotten to where they are executing their innogration plan one step at time. The long term strategy is now in view, so they are working on executing it mercilessly. The only major concern is if Apple looks to land on this same sector with similar services, but we believe there is plenty cash to go around for the top two players and therefore the concern of Apple is somewhat muted.

Given that Verizon owns the off-ramp infrastructure, it will always have a higher cost basis but at the same time will have an evergreen revenue stream which will be a different model than Apple’s.

What has kept Verizon’s stock in the value play category is the cost basis and the 45% stake Vodafone held in Verizon. The POTS cost basis and the hedged debt will disappear overtime as Verizon’s enormous cash machine begins to accumulate mountains of dollars which can be used purely on their future innogration plans instead.

Verizon may well move into that rare air in the category for both value and growth. When we contrast Verizon’s innogration strategy to the media darling of the 1990’s – Sony – it is apparent which company had a winning strategy to win the media sector war verses a company which focused only on the sector they were in without factoring in the tectonic plate shifts that the evolution of technology brings every minute of every day.

Verizon remains a buy in the STI Investments Portfolio up to $55.