Is the Summer Selling Season Upon Us?

By Jim Pearce and Rob DeFrancesco and Linda McDonough • May 26, 2015 • Breakthrough Tech Weekly

Now that the Memorial Day weekend is in our rear view mirror, it is fair to ask if the old stock market adage, “Sell in May and then go away” will turn out to be good advice for tech stocks this year. They certainly have had a very nice run so far in 2015, with the NASDAQ Composite Index hitting a record high recently.

Also there clearly are multiple pressure points on tech stocks at present, including a weakening economy in China where many tech companies either sell thier goods, or make a major contribution to the supply chain of Asian manufacturers. To be clear, China’s economy is still growing, but at “only” a 7% annualized rate which by their standards is cause for concern.

But as our portfolio updates below make clear, there is also many reasons for optimism. The “internet of things” opens up a huge market for the mega-cap legacy hardware and software companies to exploit, while the biotech sector continues its explosive growth as innogration creates new profit opportunites.

That being the case, we are going to introduce a new axiom for tech investors to contemplate that runs contrary to the old saying about the month of May: “Buy in June and you’ll be rich soon!”

Cisco’s (CSCO) CEO John Chambers waxed philosophical on his final conference call with investors on May 13th. In his usual folksy manner, Chambers compared the potential of the Internet’s current “Internet of Everything” revolution to the earlier tsunami of internet access for all.

“I believe Cisco is at a very positive inflection point. In our 1997 Annual Report, when it was not obvious that the Internet would take off, we boldly declared that an Internet revolution would alter the fortune of companies, countries, and people, and we saw it come to life. A number of years ago we started talking about the next phase of the Internet, the Internet of Everything. That will be much bigger than the last, and it will require everything to become digital. At the time, almost no one understood what we saw. Today, it’s everyone’s idea. The conversations we are having today with our customers are so similar in many ways to those that we had 20 years ago.”

Cisco has its hands in every pot of the internet revolution,selling networking hardware, software and services to auto companies, hospitals, retailers, governments and of course, telecommunications companies.  Years of expansion have left the company well diversified both geographically and by industry.  As these companies digitize their data, Cisco will continue to benefit.

Third quarter revenue grew 5%, reaching the high end of management’s estimate. Earnings of 54c were a penny better than hoped for and management guidance for the final quarter of the fiscal year were in line with expectations.  Earnings for the year ending this July should equal $2.18 up 6%,

Chambers is passing the reigns to Chuck Robbins, a Cisco superstar who has run its global sales team for years. Although Chambers will be tucking golf balls and hunting gear into his briefcase as he transitions away from his CEO role, he will remain an integral advisor to the company.

The stock, which is up 5% year to date, offers a dividend yield of 3%. Although cash from operations declined slightly in the quarter, this appears to be a temporary issue due to the timing of customer collections.  Cash on hand equalled $10 per share and is rising steadily. Mid single digit earnings growth should accelerate as service providers ramp up spending and the company is well positioned for the eventual recovery in China and Russia.

Cisco is an original member of the STI Investment Portfolio.  The stock is up 46% since then not including dividend payments.  Cisco has a 6.7 Smart Tech Rating.

CA Technologies (CA) has been stuck in a rut.  The company, which sells IT management solutions to large corporations, has been trying to reduce its dependence on revenue from Mainframe Solutions, an incredibly profitable but declining business. The stock is up almost 3% year to date but is at the same price now as it was mid-winter.  CEO Michael Gregoire, who was hired in January 2013 to initiate a turnaround, has readily admitted this will be a slow and frustrating process.  Fourth quarter earnings announced on May 7th validate his point.

Mainframe Solutions, which are primarily designed for IBM System z mainframes, represented 56% of CA’s revenue for the year ending March but a whopping 90% of its profits! Revenue from this segment dropped 3% for the year and 7% in the most recent quarter. Mainframes are powerful computers capable of processing reams of  data. These dinosaurs are a necessary cog for bulk processors like credit card companies, and although sales are slowing they are not likely to disappear entirely.

CA management is keenly aware that it needs the lifeblood of new products to stem the incessant decline of its Mainframe business. It  has been discussing its efforts to introduce “next generation” solutions in order to reignite some growth in its product portfolio.  To that end it  introduced Mobile App Analytics and a Cloud Service Management solution in 2015.  Revenue from these products is included in CA’s Enterprise Solutions group whose profit grew 44% in 2015. Unfortunately even after that impressive growth, profits from Enterprise Solutions made up only 10% of total profits.

The good news for patient investors is that CA pays a generous dividend and generates bundles of cash.  Investors can enjoy a 3% yield while waiting for the growth in these smaller products to become visible in the company’s overall earnings. Although cutting edge investors might sneer at anything associated with the antiquated business of mainframes, this business requires very little investment.  It is the proverbial cash cow, a sleepy business that generates enormous amounts of cash. In the meantime management predicts earnings of $2.41 for the year ending March 2016, up 3.5% and cash flow growth of 4.5%.

CA Technologies has been in the STI Investment Portfolio since inception and has generated a small .37% return over that time period.  Its Smart Tech Rating is 6.2. 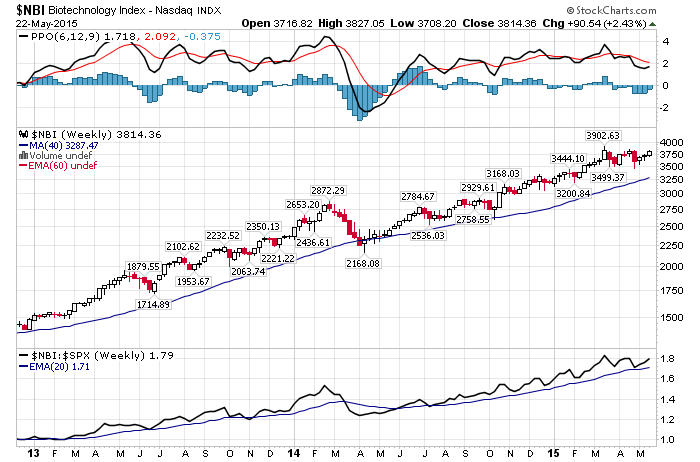 The biotech sector has had a marvelous year so far and has recovered nicely from its recent short term correction.  But as it has recovered, the sector faces a new test at its March-April highs. This suggests that we are an important decision point for investors.

This week we’re looking at the Nasdaq Biotech Index (NBI) from a slightly different viewpoint, a weekly plot.  The weekly chart smoothes out daily volatility and provides a better picture of the underlying trend for prices. This chart of NBI shows a well established uptrend that is near a test of the March-April high of 3902.63.  The lower panel of the chart also shows that the $NBI has been outperforming the S & P 500 for most of the year.  The blue lines on both the middle and lower panel are the 40 week moving average for prices on the price chart, and the 20 week exponential moving average for the relative strength comparison of the comparison between NBI and SPX.

Our point is not to be technical analysts here, but to set the stage for the discussion that will follow in this week’s update.  What the chart says is that biotech is in a fairly strong up trend. It also shows that as the NBI approaches 3900 investors will have to make a decision about whether to take profits or to push prices in the sector to new highs and perhaps build momentum for the next several weeks.

Overall, despite this being an all or nothing environment for the biotech sector, enough companies are doing well enough to keep investors interested in the sector.  There are still going to be big winners and big losers but there are an increasing number of companies that have reached the profitable or produc t stage at this point to give the sector a different level of maturity.

Does that mean that biotech can’t or won’t have setbacks? Absolutely not; the sector remains inherently volatile and many companies will fail based on decisions made by the FDA.  Others will likely have to merge or affiliate themselves with large pharmaceuticals which are starting to resemble biotech companies on their own.

The big macro factor remains the Federal Reserve’s decisions on interest rates.  Biotech is highly interest rate sensitive, especially at the small and midcap research and concept area of the sector.  For now, though, the trend remains to the up side.

We have six open positions in our biotech portfolio at the moment including two ETFs, PBE and IBB.

Bio Rad  Labs (NYSE: Bio). Buy (5/18/15 – Median Purchase Price (MPP) 146.25)- Since our recommendation Biorad  has consolidated closing on 5/22/15 at 145.13. The stock remains attractive, especially if prices consolidate in the 140-145 area.  Investors will be looking to price in the company’s introduction of new diabetes testing equipment in Europe as well as the continuation of current positive reception of its Droplet Digital™ PCR, process media, and cell biology products.

Medivation (MDVN) (Buy 5/11/15 MPP 124.11) – Medivation continues to act fairly well.  The stock lost some ground after its earnings (5/7/15) but recent analyst postings cite bullish prescription numbers for the drug as it is gaining ground with urologists, expanding the prescriber base from oncologists.  According to this report, Xtandi prescriptions written for the first quarter numbered over 30,000; compared to the 28,000 written in the previous quarter.

Emergent Biosolutions (EBS) (Buy 5/11/15 MPP 30.63) – EBS shares have remained steady as investors were kind to the company after its recent earnings miss. To be sure, management ably explained the factors involved in the miss due to a manufacturing problem for its Anthrax vaccine, which was very limited. Still, they had to stop making the vaccine as they sorted the situation out.  Dr. Duarte owns shares in EBS.  EBS recently started a trial for a booster vaccine related to its ongoing Ebola vaccine research.

Ishares Nasdaq Biotech ETF (IBB) (Buy 5/11/15 MPP 352.96) and Proshares Dynamic Biotech and Genomics ETF (PBE) (Buy 5/11/15 MPP 55.80)- Both our ETF picks have done well since our recommendation.   IBB is more weighted toward large cap stocks while PBE has more representatives from the small and midcap sector.  These two ETFs are excellent vehicles for capitalizing on the current uptrend in biotech.

Two interesting stories surfaced before the Memorial Day holiday break for the markets.  One was positive, the other one not so good.

On the positive side Regeneron (REGN) and Sanofi (SNY) announced that they will be submitting Sarilumab, after successful phase III clinical trial results. The drug is aimed at patients who experience trouble or no effects from Tumor Necrosis Factor (TNF) antibody drugs like Humira.  The trial involved 546- patients with results showing that  60% of arthritis sufferers who took 200 mg of sarilumab every other week reported improvements of at least 20%, with  56% of those getting 150 mg hit the same mark, beating out the 34% of patients who took placebo.

The negative story comes from a collaboration between Amgen (AMGN) and Astra Zeneca (AZN) in a drug called brodalumab, a drug aimed at the treatment of psoriasis, psoriatic arthritis and axial spondyloarthritis,  where Amgen pulled out of the collaboration due to the incidence of suicidal thoughts in study participants.  Amgen had previously downplayed the findings. Astra Zeneca had no comment beyond noting that it would review its next set of steps for the drug.