Biotech is Holding Down the Fort 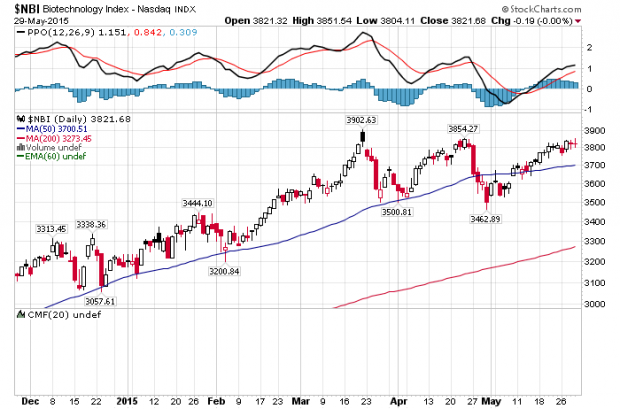 It’s hard to believe that the biotech sector, known for its inherent volatility, is an island of relative stability in an increasingly volatile stock market.  Investors are worried about a series of potential storms on the horizon, including the likelihood of a Federal Reserve interest rate increase before the end of 2015 amid signs of a slowing U.S. economy, and political and financial instability in China, Europe, Africa, and the Middle East.  Yet, the Nasdaq Biotech Index (NBI) delivered a marginal gain for the week, compared with a nearly 1% loss for the S & P 500.

And although the general climate for pharmaceuticals and the overall healthcare system is “all or nothing” due to the emphasis on cost cutting and the general upheaval of the Affordable Care Act, biotech seems to be holding up.  From a technical analysis point of view, the 3902 are on NBI is critical. If the index can clear this key chart resistance point, a move to 4300 or so would not be out of the real of expectation over the next few weeks.  That could translate into some big gains for individual biotech stocks and credible gains for biotech ETFs.  Our emerging portfolio is well positioned for such a move and will continue to be expanded over time.

Buy Alert – Neurocrine Biosciences (NSDQ: NBIX) looks ready for a potential breakout and could move to the 55-58 area. Current buy limit is $46, with a stop loss price of $36.

NBIX is in late Phase III trials for a drug aimed at treating endometriosis, a painful condition in pre-menopausal women that causes painful menses due to the growth of uterine endometrial tissue growing outside the uterus.  The company licenses the drug Elagolix to Abvie (NYSE: ABBV), formerly known as Abbot Pharmaceuticals.  If Elagolix continues its success it would be worth $575 million in licensing fees to Neurocine.  Bullish analysts have predicted a potential $1.2 billion dollar market for Elagolix.

The drug is not without risk. It has established competition in the form of oral contraceptives and other long standing treatments. There have been some studies that suggest that the margin of improvement of symptoms of Elagolix, although statistical significant, may not be clinically significant.  There is also the question of cost. In the current market it may be difficult for ABBV to sell the drug to gynecologists who are under intense pressure from insurance companies to avoid costly new drugs.

The company is still research-dependent for its revenues and has no net income although it has narrowed its losses recently.  NBIX has $31 million in cash on hand and 198 million in total assets with only 34 million in liabilities. That puts it in a viable position at this stage of its development. Its market cap is $3.75 billion.  It has a negative cash flow and sold $138 million worth of stock in 2014 to finance operations.

This is a highly speculative stock. Yet, if Elagolix confirms its efficacy, and can deliver a pleasant surprise we may see a nice move up.  More important, if the biotech sector starts a broad move, we expect to see NBIX go along for the ride.

Emergent Biosolutions (EBS) (Buy 5/11/15 MPP* 30.63 – 5/22/15 Closing price 31.86) – EBS shares moved steadily higher last week. The company sold a Canadian plasma processing center to Prometic Life Sciences last week after signing a long term manufacturing contract with Prometic earlier in the week. The manufacturing deal should be worth some $125 million U.S. Dollars over the life of the contract. The terms of the purchase were undisclosed.

Also interesting was the news of the Pentagon’s shipment of live Anthrax by mistake this past week.  EBS makes BioAnthrax, a preventive anthrax vaccine and is working on a new generation of the vaccine.

Last week we reported that Medivation’s prescription volume is increasing ahead of expectations as urologists are increasingly prescribing the medication, expanding the base beyond oncologists.

Repligen (RGEN) (Trading Buy 4/20/15 – Median Purchase Price 33.23. Buy 5/11/15 Median Purchase Price 38.45 – 5/22/15 Closing Price 40.76) – Repligen continued its recent consolidation, giving those who have yet to buy a chance to move into the shares.  RGEN is well positioned in the current hyper growing research market as it is a leading manufacturer of one use filtration systems for the separation on antibodies. Dr. Duarte used the consolidation to enter a position in RGEN last week.

Last week we noted that the ASCO abstracts didn’t do much to move prices after release. However, there might have been a delayed reaction given the overall positive vibe in the biotech sector last week.  We’ll be watching to see what happens when the market reacts to the actual research paper presentations that ended on Sunday.

Celldex (CLDX) told the conference that its Rintega (rindopepimut ) vaccine against brain cancer (glioblastoma), paired with Avastin  improved the survival in patients with recurrent tumors 11.6 months on average vs. a group taking Avastin alone (9.6 months).

Clovis Biotech (CLVS) provided the conference positive news regarding its ovarian cancer drug  rucaparib but delivered a slight disappointment with results of recent data on its leading lung cancer drug rociletinib.  Clovis is expected to file for FDA approval of rociletinib by August 2015 with expectations of approval before year’s end.