This week we are featuring two Big Picture charts as an interesting relationship is developing between the biotech sector and the bond market.  The Nasdaq Biotech Index (NBI) delivered a fairly credible breakout on June 18, fulfilling our expectations. We based our analysis on the low volatility in the biotech stocks and the shrinking of the Bollinger Bands (green dotted lines) that can be seen in the chart during the week of 6/19 prior to the breakout.  But the index rolled over on the following week.  Yet all is not lost, as NBI held up at the technical support level of the 20-day moving average (green dotted line) on 6/26. So our expectation remains that the Nasdaq Biotech Index (NBI) could still begin a move toward 4500 if it could hold above 3900, just purely on momentum.  Still, the bond market may have a different idea in the short term, as the U.S. Ten Year Note Yield (TNX) rose above 2.45% to end the week of June 26. 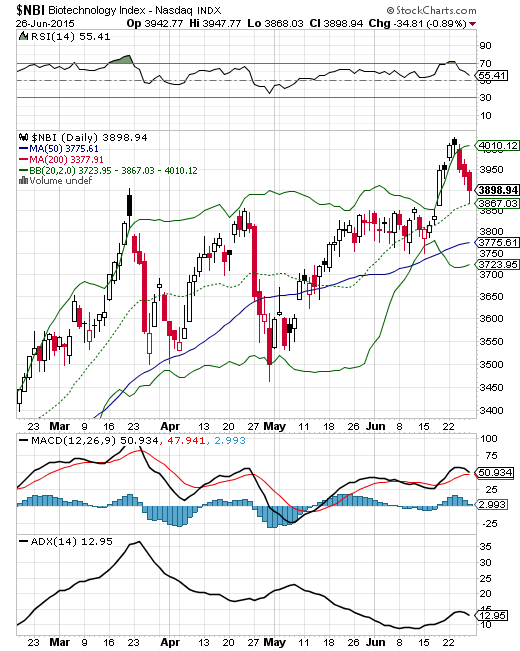 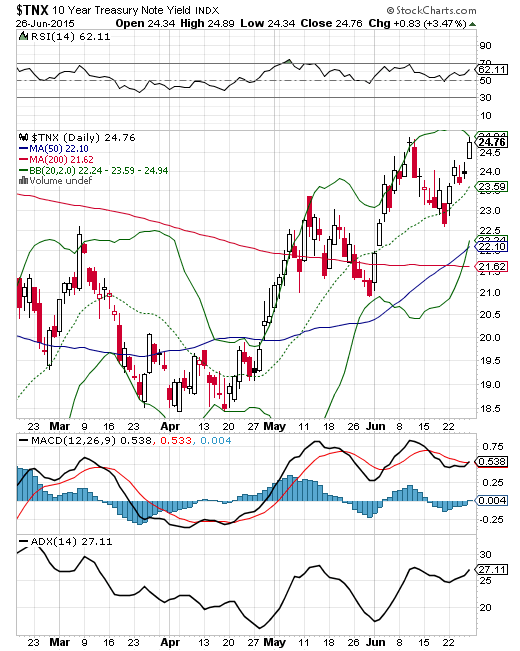 Why is this important? Many biotech companies, especially the drug research companies in key stages of growth, such as those with one product on the market, are often still reliant on debt financing to continue their development and emergence.  If market interest rates start to climb, especially if the U.S Treasury note yield rise is followed by a Federal Reserve increase in September or perhaps sooner, it could be very negative for all stocks, but especially the high valuation, high growth expectation biotech sector.  If you add that higher interest rates may lead to a persistently higher dollar, you can expect some negative impact on the foreign earnings of many companies.

Aside from the ongoing situation in Greece, the other unknown at this point is the “here to stay” Affordable Care Act (ACA) and the potential for it to empower health insurance companies, Medicare, and Medicaid to reduce or even stop paying for expensive biotech blockbuster drugs.  The combination of higher interest rates for small development stage companies and tighter purse strings from insurance companies, Medicare, and Medicaid and a strengthening dollar could cause a lot of trouble for biotech companies.

The current merger and acquisitions wave in the health insurers is certainly a sign that these companies are moving toward hardening their stance on how much they pay for medical services in the future.  The bullish development for now is that we have been leaning toward investing in companies on the infrastructure and testing side of the industry, not so much the pharmaceutical side.  Whether this holds up or not remains to be seen, but it is holding up for now.

Our new EBIS portfolio addition is laboratory testing small fry Meridian Biosciences (VIVO).  This is as under loved a biotech stock as we could find with the added attraction being that the company’s current strategies are hitting on all cylinders.  Of course, that gets us all worked up since we like undervalued stocks with good management, growing revenues and profits, and good balance sheets that the market has not discovered.

VIVO has a nifty market cap of $734 million and makes money.  It develops, manufactures, and markets diagnostic testing kits focused on gastrointestinal infections, virus detection, and parasitic illnesses.  It also produces reagents and key testing and DNA amplification and enzyme related materials used in research.  It has recently released a new product, the Para Pak single vial transport system for parasite testing which simplifies the transport of samples to the lab by using one vial instead of the more complicated multiple package systems that are currently on the market.

We expect VIVO to benefit from the global immigration trend and the potential for infectious diseases to expand their territory via travel related transmission channels. The company has a well established global platform including a recently opened office in Beijing (January 2015).

And it offers a 4.3% annual dividend yield with a 0.20 per share quarterly dividend.

For aggressive investors, we suggest adding the ProShares Ultrashort Biotech ETF (BIS) to your holdings on a move above 29. This ETF is not for everyone.   It’s a leveraged ETF and its price changes at twice the rate of the Nasdaq Biotech Index (NBI).  Investors who are aggressive and comfortable with hedging their portfolio should consider adding BIS as protection in the near term with a 7% stop loss.  Dr. Duarte owns shares in BIS.

Buy Alert Triggered – Neurocrine Biosciences. (NBIX)  (BUY 6/16/16 at 46 – 6/26/15 closing price 46.72 – Stop loss raised to 37) Neurocrine Biosciences delivered the expected breakout that we’ve been waiting for and is now an active stock in our portfolio.  The stock has the potential to move to the 55-58 area over the next few weeks.  We originally highlighted NBIX in our 5/29/15 update.  We like the stock based on the prospects of its Elagolix drug for treating endometriosis a condition of pre-menopausal women linked to the menstrual cycle and pelvic pain.  Dr. Duarte owns shares in NBIX.

Repligen (RGEN) (Trading Buy 4/20/15 – MPP 33.23. Buy 5/11/15 MPP Price 38.45 – 6/26/15 Closing Price 42.13) – Repligen looks to be on the verge of breaking out of its consolidation pattern.   There has been good support for the shares at 37.50. RGEN remains well positioned in the current hyper growing research market as it is a leading manufacturer of one use filtration systems for the separation on antibodies.  It is also the world’s leading producer of Protein A, the basic component of monoclonal antibodies used for research and biopharmaceuticals manufacturing.  In a recent presentation the company reiterated its expectations for rising organic growth rates in the 25-29% range due to recent and scheduled product launches.  The company also noted that they have 350 potential molecules in their pipeline. Dr. Duarte owns shares in RGEN.

Emergent Biosolutions (EBS) (Buy 5/11/15 MPP* 30.63 – 6/26/15 Closing price 33.59) – EBS shares remain in a very sustainable looking up trend.   The stock may be bought until the 34 area as part of this breakout.  EBS makes BioAnthrax, a preventive anthrax vaccine and is working on a new generation of the vaccine.  Dr. Duarte owns shares in EBS.

Medivation (MDVN) (Buy 5/11/15 MPP 124.11 – 6/26/15 Closing Price 112.31- Stop Loss 108) – Medivation continues to struggle as investors start to factor in the potentially negative effects of the ACA’s effects on the flow of money through the U.S. healthcare system.  Although the story remains attractive, investors are now facing the unknown. So we’ve added a stop loss at 108.  The news has been negative of late on the company’s leading drug Xtandi. While   Xtandi continues to gain ground in its FDA approved indication in the treatment of prostate cancer it has not delivered well in the fight against breast cancer.  Recently the company announced that it will be redeeming $167 million worth of convertible notes that mature in 2017.  It has also amended its stock awards program and has expanded the potential issuing of shares in the future.

Amgen, Lilly and Teva all delivered news on their migraine treatments, signaling what could be a new dynamic in biopharmaceuticals.   Amgen reported that  AMG334, in a phase II study, cut the number of migraine day s per month from 8.7 by 4.9 after a year on the therapy, improving on data for 12 weeks of treatment.  Lilly reported what sounds as encouraging phase II trial data on its injectable drug , LY2951742, calling the results “statistically significant.”

Dr. Joe Duarte has been a professional investor and independent analyst since 1990.  He has appeared on CNBC, has published articles on Marketwatch.com and has been widely quoted in the major media including The Wall Street Journal and Barron’s magazine.  He is author of “Trading Options for Dummies,” 2nd Edition, “Trading Futures for Dummies” and eight other books. His second book was “Successful Biotech Investing.”  Disclosure: Dr. Duarte owns shares of Emergent Biosolutions (EBS), Repligen (RGEN), Neurocrine Biosciences (NBIX), Meridian Biosciences (VIVO) and the PBE ETF as of 6/26/15. Dr. Duarte may actively trade biotech stocks and ETFs at any time for his own portfolio.  He will fully disclose his holdings in this space.