Although we do not advocate trading the stock market on a short term basis (which we define as a holding period of less than one year), sometimes our model is so accurate in predicting the near term direction of certain stocks that we can’t resist taking advantage of it.

Case in point is disk drive manufacturer Western Digital (WDC), which was one of our original recommendations in the STI Investments Portfolio in December of 2013 (see page 2). At that time WDC was trading near $80, but quickly escalated above $100 by August of the following year.

So, on August 21st we sold our position in WDC for a 25% gain in only eight months because we felt the stock price had run up a little too fast. Our fear was confirmed less than two months later when WDC dropped below $85 during the so-called “Ebola crash” in October of 2014. At that time we issued a new buy Alert with a limit price of $80, which WDC never reached so it remained out of our portfolio as its price once again reached $100 in April of this year.

However, recent concerns over PC sales have driven the price of WDC back down below $80, so we are adding it today to our Investments portfolio with a buy limit of $82. That means we don’t want you to chase the stock, but buy it on dips as the stock market convulses over the Greek debt crisis. Quite frankly, we don’t think the situation in Greece will have much impact on tech stocks, but when the entire stock market is taking a dive it will pull down everything with it in the near term.

We still like the long term outlook for WDC, and with an STR of 8.3 (5th highest score of all the tech stocks we rate) would not be at all surprised to see it crest above $100 within a year. In fact, earlier today a respected tech analyst at Needham “slashed” his price target for WDC down to $101 (from $124), which still amounts to a 25% gain from current prices. We’ll write more about it in an upcoming edition of STI, but in the meantime feel free to add WDC back to your portfolios if you do not already own it.

We are still following the relationship of the Nasdaq Biotech Index (NBI) to the U.S. Ten-Year Note Yield (TNX).   Notice how the breakout delivered by the NBI on June 18 (below, left chart arrow) rolled over on the following week and how it corresponded to the bottoming out and upside reversal of the U.S. Ten Year Note Yield (below, right chart arrow). Since then the action in both markets has been extremely well linked.  If things remain the same, we may see the Nasdaq Biotech Index (NBI) resume its move toward 4500 if it could hold above 3900, just purely on momentum.  Much will depend on what the situation in Greece does by the early part of the week of July 6th, and what the Federal Reserve says and does about interest rates in the near and intermediate term. 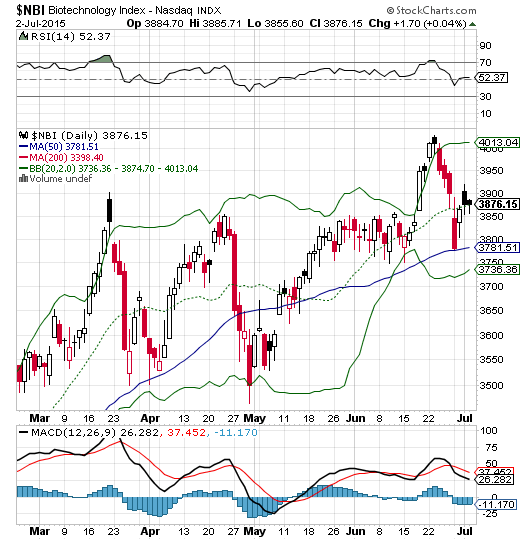 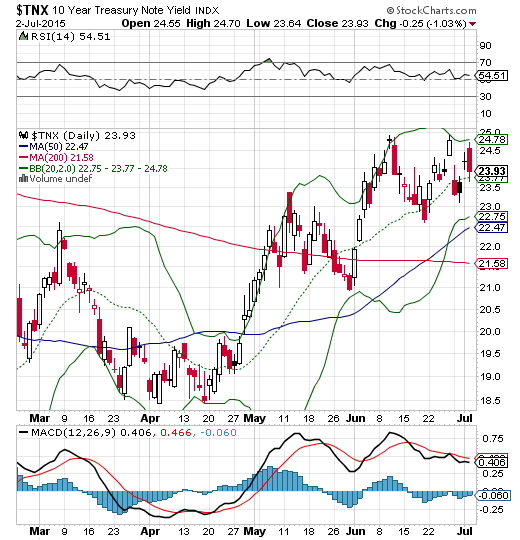 A large number of biotech companies, especially the drug research companies in key stages of growth, rely on debt financing to continue research and operations.  Rising interest rates will likely hurt the ability of many of these companies to raise capital.

The news that Aetna (AET) is buying Humana (HUM) for $37 billion hit the wires late last week, and, in our opinion is the first of many such deals.  The effects on the overall health care sector are unknown at this point.  But, it would not be unexpected to see these newly formed larger companies, start to tighten the purse strings, especially on expensive biotechnology drugs and even the specific therapy methods by which some of them may be delivered.  These two factors are extremely important as they may affect the potential profits of biotech companies and both the focal points and the methods of research in the future.  It’s early, but it’s not as unlikely as anyone may think.

Our new EBIS portfolio addition is laboratory testing small fry Meridian Biosciences (VIVO).  This is as under loved a biotech stock as we could find with the added attraction being that the company’s current strategies are hitting on all cylinders.  Of course, that gets us all worked up since we like undervalued stocks with good management, growing revenues and profits, and good balance sheets that the market has not discovered.

VIVO has a nifty market cap of $767 million and makes money.  The company is in an excellent niche, as it develops, manufactures, and markets diagnostic testing kits focused on gastrointestinal infections, virus detection, and parasitic illnesses.  It also produces reagents and key testing and DNA amplification and enzyme related materials used in research.  It has recently released a new product, the Para Pak single vial transport system for parasite testing which simplifies the transport of samples to the lab by using one vial instead of the more complicated multiple package systems that are currently on the market.

We expect VIVO to benefit from the global immigration trend and the potential for infectious diseases to expand their territory via travel related transmission channels.  The company has a well-established global platform including a recently opened office in Beijing (January 2015).

And it offers a 4.3% annual dividend yield with a 0.20 per share quarterly dividend.

For aggressive investors, we suggested adding the ProShares Ultrashort Biotech ETF (BIS) to your holdings on a move above 29. The hedging component has been active since June 29th.  See below for more details.  BIS is not for everyone.   It’s a leveraged ETF and its price changes at twice the rate of the Nasdaq Biotech Index (NBI).  Investors who are aggressive and comfortable with hedging their portfolio should consider adding BIS as protection in the near term with a 26.50 stop loss.  Dr. Duarte owns shares in BIS.

Buy Alert Triggered – Neurocrine Biosciences. (NBIX)  (BUY 6/16/16 at 46 – 7/2/15 closing price 47.31 – Sell Stop 37) Neurocrine Biosciences delivered the expected breakout that we’ve been waiting for and is now an active stock in our portfolio.  The stock has the potential to move to the 55-58 area over the next few weeks.  We originally highlighted NBIX in our 5/29/15 update.  We like the stock based on the prospects of its Elagolix drug for treating endometriosis a condition of pre-menopausal women linked to the menstrual cycle and pelvic pain.  Dr. Duarte owns shares in NBIX.

Repligen (RGEN) (Trading Buy 4/20/15 – MPP 33.23. Buy 5/11/15 MPP Price 38.45 – 6/26/15 Closing Price 42.13) – Repligen looks to be on the verge of breaking out of its consolidation pattern.   There has been good support for the shares at 37.50. RGEN remains well positioned in the current hyper growing research market as it is a leading manufacturer of one use filtration systems for the separation on antibodies.  It is also the world’s leading producer of Protein A, the basic component of monoclonal antibodies used for research and biopharmaceuticals manufacturing.  In a recent presentation the company reiterated its expectations for rising organic growth rates in the 25-29% range due to recent and scheduled product launches.  The company also noted that they have 350 potential molecules in their pipeline. Dr. Duarte owns shares in RGEN.

Emergent Biosolutions (EBS) (Buy 5/11/15 MPP* 30.63 – 7/2/15 Closing price 32.36) – EBS shares remain in a very sustainable looking up trend.   The stock may be bought until the 34 area as part of this breakout.  EBS makes BioAnthrax, a preventive anthrax vaccine and is working on a new generation of the vaccine.  Dr. Duarte owns shares in EBS.

Medivation (MDVN) (Buy 5/11/15 MPP 124.11 – 7/2/15 Closing Price 112.06- Stop Loss 108) – Medivation continues to struggle but did not make a new low on the week of 7/2/15.  The stock remains above its 108 sell stop.  This weakness may develop further as investors start to factor in the potentially negative effects of the ACA’s effects on the flow of money through the U.S. healthcare system.  Although the story for MDVN remains attractive, investors are now facing the unknown. The news has been negative of late on the company’s leading drug Xtandi. While   Xtandi continues to gain ground in its FDA approved indication in the treatment of prostate cancer it has not delivered well in the fight against breast cancer.  Recently the company announced that it will be redeeming $167 million worth of convertible notes that mature in 2017.  It has also amended its stock awards program and has expanded the potential issuing of shares in the future.

Bio-Rad Labs (NYSE: BIO). Buy (5/18/15 – MPP) 146.25 – 7/2/15 closing price 146.37). Bio-Rad has been in a consolidation pattern in the last few weeks. The stock has stumbled in the past two weeks and is worth watching.   Bio-Rad has its earning scheduled to be released on August 4th.  The company makes testing equipment.  BIO is expected to introduce a new line of diabetes testing equipment in Europe this fall and has recently received FDA approval for a high speed diabetes testing system in the U.S.

Our trend following ETF model has split and is currently hedged via the ProShares Ultrashort Biotech ETF (BIS) ETF. The large cap weighted IBB portfolio was stopped out with a nearly 3% gain on 6/29/16 during the market’s big decline, but it immediately jumped back up above it so we have a new entry point on IBB at 375.

The more cap balanced PBE ETF was not stopped out and our buy signal is still active.

IBB is weighted more toward the large cap biotechs on the Nasdaq while PBE has smaller companies as well as some NYSE stocks as components.  Dr. Duarte owns shares in PBE and BIS.

Vertex Pharmaceuticals (VRTX) gained on July 2nd after receiving FDA approval for its Cystic Fibrosis drug Orkambi, a combination drug consisting of Vertex’s previous CF drug Kalydeco with a new drug ingredient, Lumacaftor. The treatment is aimed at the 8500 patients who suffer from a more common form of CF.

And while this is good news for patients, this may well be an early test of the pricing restriction power of insurance companies and the government with regard to expensive biotech drugs.  Orkambi’s price tag is $259,000 per year or $259 million per 1000 patients.