Before we start on our big picture in biotech, it’s important to point out that the global economy is still a work in progress. The situation in Greece may be far from resolved.  There are still many potential geopolitical issues that are festering. China’s market is still volatile.  And the Federal Reserve is still forecasting that it will increase interest rates before the year is out.   So, while we are not making a market call, at this time, we also want to make sure that all our subscribers remain aware of the fact that this is not a market without risk and that caution is never a bad ally when it comes to investing. 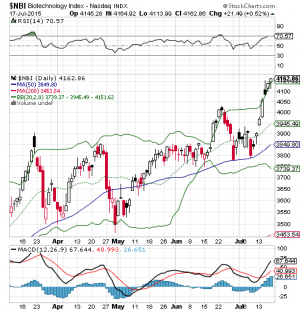 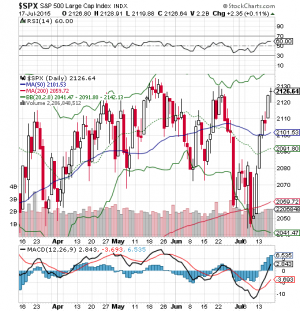 For those who have not been keeping score, the Nasdaq Biotech Index (NBI) is up over 33% in 2015 as of July 17 while S & P 500 is just over 3% for the year.  We are still expecting that NBI is heading to 4500 as it has now held above 3900.  What this means is that the biotech index still has another 5-10% potential upside from its July 17 close, barring any external events. As earning season unfolds, we may see some volatility in individual companies. We would expect some backing and filling along the way and perhaps some increased volatility. But the 3900 support level for NBI is now our benchmark for the current advance.   A sustained break below this key price area would be very negative.

Aside from any price action due to earnings, we may also see a pickup in merger and acquisitions activity becoming a powerful influence on the price of biotech stocks, as companies look to position themselves in order to deal with the consolidation wave in the health insurers.  Insurance companies are the guys that pay the bills for the products sold by biotech companies.  It’s also important to keep an eye on the situation in Medicare, the payment system that sets the tone for private insurers.

The new wave in Medicare is toward a process called bundling, where a block payment is made to a central body, such as a hospital or an accredited care organization (ACO).  The physicians and other service providers would then be paid by the hospital or the ACO for their services. The payment formula, as it is being described, would be based on outcomes over 90 days. That is a big change from the current fee for service payment model for hospitals, physicians, and other service and product providers.

The Center for Medicare and Medicaid Services (CMS), the government agency that runs Medicare, has already put out bundling guidelines for joint replacement procedures. Both knee and hip replacements will be reimbursed under these guidelines in the near future.

There is no mention, yet, of medications and any effect of bundling on their prices.  Yet, it’s a fact that biotech drugs are among the most expensive of all drugs.  Thus, the bundling dynamic is something to keep an eye on as a potential negative effect on biotech company earnings.

Masimo Corporation looks ready to move decidedly higher as it approaches its earnings release on August 5 at 4 P.M.  Like our other biotech portfolio picks, this is a well run company with cash on its balance sheet and a growth agenda.  In fact, Masimo has a nice stash of cash on its balance sheet which it could use to make acquisitions or to plow into research and development.  What that means is that the company’s got time to deliver on its products and get it right.

What we really like are the products, which monitor vital signs when other products can’t.  Masimo pioneered Signal Extraction Technology (SET) a process that lets the pulse oximeter measure the oxygen content of blood without punctures of arteries at states of low blood pressure, where it become a most critical piece of data.  Pulse oximeters are non-invasive, clip-on devices, usually placed on fingers, toes, or ear lobes and are used to measure the amount of oxygen in the blood during anesthesia and during patient stays in the intensive care unit. They are increasingly being used in non-invasive care units as well in order to measure the oxygen concentration of patient’s blood when they are under the influence of opioid painkillers.

The company also has other product lines aimed at the operating room and intensive care arenas that involve monitoring of gases, such as oxygen and carbon dioxide as patients breathe.  Masimo is starting to make headways into the length of stay and complication rates of patients during surgeries because its equipment is more accurate in measuring key data than its competition. This puts it in a good position, given the global push, but also the ACA related push in the U.S. toward lower costs in hospital stays.

VIVO is a small stock with a market cap of $767 million but is a money maker.  The company develops, manufactures, and markets diagnostic testing kits focused on gastrointestinal infections, virus detection, and parasitic illnesses.  It also produces reagents and key testing and DNA amplification and enzyme related materials used in research.  It has recently released a new product, the Para Pak single vial transport system for parasite testing which simplifies the transport of samples to the lab by using one vial instead of the more complicated multiple package systems that are currently on the market.

We expect VIVO to benefit from the global immigration trend and the potential for infectious diseases to expand their territory via travel related transmission channels.  The company has a well established global platform including a recently opened office in Beijing (January 2015).

Meridian will deliver earnings on July 23rd 2015. Estimates are for $48.6 million in revenues and 22 cents per share in earnings.

Neurocrine Biosciences. (NBIX)  (BUY 6/16/16 at 46 – 7/17/15 closing price 53.51 – Sell Stop 40) Neurocrine Biosciences added some more to its recent advance. The sell stop has been raised to 38.  The stock has the potential to move to the 55-58 area over the next few weeks.  We originally highlighted NBIX in our 5/29/15 update.  We like the stock based on the prospects of its Elagolix drug for treating endometriosis a condition of pre-menopausal women linked to the menstrual cycle and pelvic pain.  Dr. Duarte owns shares in NBIX.

Repligen (RGEN) (Trading Buy 4/20/15 – MPP 33.23. Buy 5/11/15 MPP Price 38.45 – 7/17/15 Closing Price 40.46) – Repligen will be reporting earnings on August 4th.  The stock continues to consolidate.   There has been good support for the shares at 37.50.  The earnings estimates are fairly modest, so it is plausible to expect a beat, although no one ever knows.  RGEN is the world’s leading producer of Protein A, the basic component of monoclonal antibodies used for research and biopharmaceuticals manufacturing.  In a recent presentation the company reiterated its expectations for rising organic growth rates in the 25-29% range due to recent and scheduled product launches.  The company also noted that they have 350 potential molecules in their pipeline. Dr. Duarte owns shares in RGEN.

Repligen will report earnings for its most recent quarter on August 6, 2015 at  8:30 A.M. Estimates are for revenues of $20.05 Million and earnings of 8 cents per share.

Emergent Biosolutions (EBS) (Buy 5/11/15 MPP* 30.63 – 7/17/15 Closing price 34.44) – EBS shares remain in a very sustainable looking up trend.   The stock has reached its buy limit at 34 area as part of this breakout.  EBS makes BioAnthrax, a preventive anthrax vaccine and is working on a new generation of the vaccine.  Dr. Duarte owns shares in EBS.

EBS will report earnings for its most recent quarter on August 3, 2015 at 4 P.M. Estimates are for revenues of $124.25 Million and earnings of 26 cents per share.

Bio-Rad Labs (NYSE: BIO). Buy (5/18/15 – MPP) 146.25 – 7/17/15 closing price 151.56). Bio-Rad has been in a consolidation pattern in the last few weeks and is giving investors a rare second chance to enter at the original buy area near 146. Bio-Rad has its earning scheduled to be released on August 4th.  The company makes testing equipment.  BIO is expected to introduce a new line of diabetes testing equipment in Europe this fall and has recently received FDA approval for a high speed diabetes testing system in the U.S.

Bio-Rad will report earnings for its most recent quarter on August 6, 2015 at  4 P.M. Estimates are for revenues of $498.85 Million and earnings of 78 cents per share.

News Update:   It’s all About Alzheimer’s disease this week

Eli Lilly (LLY) and Biogen (BIIB) will be revealing details of their Alzheimer’s drugs on Wednesday July 22 nd. The companies have two separate antibodies aimed at amyloid, the substance that composes the plaques that block the spaces between brain cells and lead to the loss of function that characterizes the disease.

Biogen’s aducanumab has had some preliminary success, so investors are hoping that the news this week will be even better for the stock.  Lilly’s solanezumab data will be based on a phase III trial on early Alzheimer’s patients.

This is a high risk area of research, so it will be interesting to see what the companies say.  A big benefactor of any success from these drugs may be our EBIS portfolio member Repligen which is the leading manufacturer of protein A, the building block of antibody based drugs.