The Big Picture: In Uncharted Waters

We are in uncharted waters and risk is extremely high for the financial markets at the moment. Investors in biotech and beyond will have a lot to consider in the next few days. The U.S. stock market, as measured by the S & P 500 rolled over on Friday, November 13th, which was disturbing enough without the horrific terrorist attack in Paris on that same evening.   This latter single event could become a significant catalyst for the financial markets and the overall thinking of the Federal Reserve over the next few days to weeks. 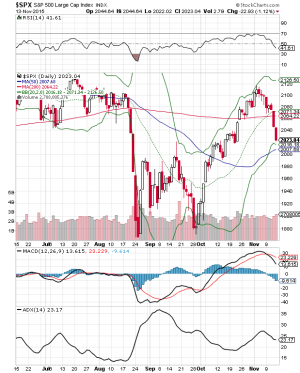 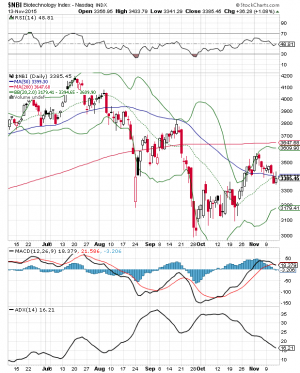 And while we still stand by last week’s advice that investors should consider looking at individual stocks instead of the traditional “basket trade” approach that has worked well in the past, there is no way to predict what may or may not happen next in the markets. Thus, risk management, not profit now becomes the priority for portfolio management.

The Nasdaq Biotech Index (NBI) remains in a negative pattern of lower highs and lower lows, although it did act a bit better on Friday the 13th than the S & P 500 (SPX). But that may be meaningless as the markets digest the evolving dynamics in the global economy, which continues to slow, and the effect of the terrorist attack and further developments along this theme in the next few days.

The key technical event is that the S & P 500 fell below its 200-day moving average last week and that the biotech sector acted slightly better but also remains in a down trend. That means that investors could well decide to hit the sell button and cause prices in the majority of stocks could tumble. In these shaky markets it’s important to remain disciplined and to follow your investment plan:

Our trading recommendations are still hanging on. The sell stops on open positions have been adjusted to reflect the closing prices of the week that ended on 11/13/15.

Trading stocks are only recommended as trades based on technical analysis.   These are not stocks meant for long term holding periods.

Trading Recommendation: Celldex Therapeutics (CLDX) Trading Buy Range $12-14. Sell stop at $11 (based on 11/13/15 closing price). Buy range entered – 11/13/15 closing price $14.23. For every dollar of price increase, raise the stop loss by $1. This is almost an EBIS stock. The company is working on a vaccine for aggressive brain cancers. It has plenty of money on its balance sheet but is high risk and has not been able to make money consistently. In this market, it may be worth exploring on a trading basis.

Cerus Corp. is a tiny, $550 million market capitalization stock that is well stocked with cash, has an interesting pipeline and is in the difficult stage of development where it is pushing for market share in the United States while struggling with the negative effects of a strong dollar since its current customer base is overseas. However, the company has made progress getting its product into key areas of the Southern United States through deals with key blood product distribution not for profit entities.

Cerus developed the INTERCEPT system from virus and other disease causing organism detection in blood products. It currently has FDA approval for INTERCEPT systems for platelets and fresh frozen plasma, key blood components for clotting. It is working on the INTERCEPT system for red blood cells. The company notes that the “the INTERCEPT treatment is designed to inactivate established transfusion threats, such as Hepatitis B and C, HIV, West Nile Virus and bacteria, as well as emerging pathogens such as chikungunya, malaria and dengue.”

The current immigration and the frequency and potentially long lasting nature of the geopolitical situation makes Cerus an interesting long term, speculative buy for patient investors.   In times of trouble, as the likelihood of protracted conflicts, as well as the potential increase for infectious diseases increasing as a result of population migrations, this company has the potential to deliver some interesting surprises.  It is a speculative play but does have some staying power with rising cash levels on its balance sheet.

The big bet is on the escalation of global conflicts that require increased use and thus testing and safety of the blood supply. If Cerus can get the red blood cell Intercept system approved, it could mean a significant increase in its revenues. Currently, the company has just received Medicare and Medicaid approval (CMS) for upgraded billing codes if a hospital uses INTERCEPT for its plasma and platelet testing and pathogen inactivation. This certification allows the user to charge a higher premium for its blood products.

CERS gets a +7 EBIS rating because it has yet to turn a profit. Yet, given the low price of the stock, and the huge potential, especially in the current market, it’s a great speculative play since it meets most of the criteria for an EBIS stock. And although it’s a highly speculative bet, this is one of those companies that could turn the corner fairly rapidly under the right set of circumstances. Thus, we see little risk in owning a small position, monitoring the company closely, and adding to the position over time as things develop.

The EBIS system consists of eleven fundamental criteria that are updated every quarter after the earnings results for each company are published. Each criterion gets a value of +1 or zero. A total of 8 or more points earn a Buy rating. A total of 5-7 points earn a Hold rating. Less than 5 points delivers a Sell or Avoid rating. EBIS was introduced in the June 15, 2015 issue of the Biotech Report.

Our EBIS portfolio has been more volatile of late. Generally speaking it makes sense to see if these stocks develop some type of sideways pricing action before adding to any position aggressively. Details below:

Update: MASI beat earnings on 11/5/15. Earnings came in at 36 cents per share on revenues of $152.6 million. Analysts estimated an average of $149.31 million in revenues and 31 cents per share in earnings. MASI beat expectations and gave upward guidance for the future. The company recently received good marks on its anesthesia monitoring equipment at the recent American Society of Anesthesiologists meeting in San Diego.

This is the second straight quarter that the company beat expectations. The company raised its full 2015 guidance to total revenues of $621 million, up from $608 million and earnings per share from $1.48 to $1.51.   The stock remains well within its buying range of 40-44 and keeps a 9.5 EBIS rating based on its June 2015 quarter. MASI is a well run company with plenty of cash on its balance sheet and a growth agenda. We like Masimo because it has innovative products, an excellent growth rate, and a nice stash of cash on its balance sheet which it could use to make acquisitions or to plow into research and development.

Meridian made news on Friday the 13th of November when it disclosed a minority stake in Oasis Diagnostics a company that specializes in diagnostic tests that use saliva as the medium for testing. Meridian delivered a mixed earnings report on November 5, 2015, beating on revenues at $47.5 million and missing on its net income by one cent at 20 cents per share. Estimates averaged $46.64 million in revenues and 0.21 cents per share for earnings.   This was a reversal of the previous quarter.

VIVO develops, manufactures, and markets diagnostic testing kits focused on gastrointestinal infections, virus detection, and parasitic illnesses. It also produces reagents and key testing and DNA amplification and enzyme related materials used in research. It has recently released a new product, the Para Pak single vial transport system for parasite testing which simplifies the transport of samples to the lab by using one vial instead of the more complicated multiple package systems that are currently on the market.

Alert: Emergent Biosolutions – Downgraded to HOLD based on technical trends and sluggish sales, which suggests possible earnings and revenue problems in the future. Sell stop adjusted.

EBS reported its latest earnings on November 5 after the close and beat expectations delivering 83 cents per share in net income on revenues of $164.9 million. Estimates average $151.42 million in revenues and 56 cents per share.   EBS has a history of positive surprises. The company reported earnings of 36 cents per share for its second quarter of 2015 beating analyst estimates of 26 cents. Revenues climbed 14% from the year-ago period to $126.1 compared to an estimate of 124.25 million.   The company also announced that it will spin off its biosciences unit, whose focus is oncology to investors.

Sales of BioAnthrax, a preventive anthrax vaccine and is working on a new generation of the vaccine were strong in the quarter while overall bio-defense sales slumped. Dr. Duarte owns shares in EBS.

The U.K. biotech industry is expressing concerns over a perceived shortage of skilled labor. Translation: the U.K. is looking for scientists.

According to Fierce Biotech, a poll of 93 different pharmaceutical companies recently revealed that 59 of them have “concerns” about their ability to find and retain qualified employees. The survey included responses from large companies such as Astra Zeneca (AZN), Glaxo (GSK), Novartis (NVS) and Pfizer (PFE). The results of the survey imply that this may be a reason for many of these large companies to have cut their operations in the U.K. The areas of highest need were cited as “expertise in clinical pharmacology, bioinformatics and statistics.”

The survey, conducted by The Association of the British Pharmaceutical Industry (ABPI) concluded: “Companies find it difficult to recruit individuals with the right set of skills and relevant experience. Skills in this area are in high demand in various industry sectors and academia across the globe,” adding that the shortages have gotten worse since they first became noticeable in 2008.