Of all the ways to produce renewable power, no technology manages to do it as consistently and reliably as geothermal. In fact, according to data collected by the Energy Information Administration (EIA), only nuclear power has a higher average capacity factor:

Capacity factor compares the power produced with the maximum generating capacity. The long-term average is around 90% for nuclear, 70% for geothermal and 50-70% for coal-fired and natural gas-fired power sources.

Wind and solar power technologies are much more variable and have much lower capacity factors that can and do drop to zero when the wind doesn’t blow or the sun doesn’t shine. This means that these energy sources generally have to be backed up by other sources of firm power (power that is available on demand). Unlike most other renewable options, geothermal is considered a firm power source.

Geothermal technology uses heat from the interior of the earth to produce steam, which is passed through a turbine that then produces electricity. It generally requires geothermal reservoirs that are less than 2 miles deep. Geothermal is a relatively mature renewable technology with a cost of generation comparable to that of coal-fired plants. Its usage, however, is limited by geography and geology, and this has translated into growth rates far below those of wind and solar power.

Approximately 315 megawatts (MW) of new geothermal generating capacity came online in 2015, bringing global capacity to 13.2 gigawatts (GW). Turkey led the world in adding new geothermal capacity in 2015, accounting for about half of the global increase for the year. But the U.S. remains the top geothermal energy producer by far with 3.5 GW of installed capacity. Iceland has been regarded as the geothermal champion because of its high per-capita output. But while the country does generate 25% of its electricity from that source, it ranks 7th in absolute terms with 700 MW of installed capacity. 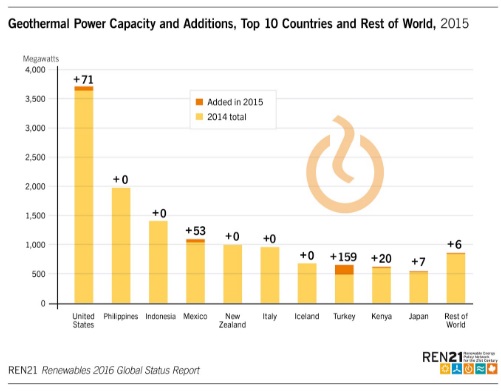 Chevron remains one of the largest producers of geothermal power in the world, but earlier this year it announced plans to sell geothermal assets valued at $3 billion in Indonesia and the Philippines.

But for an investor looking for a more focused play on geothermal power, Ormat Technologies (NYSE: ORA) is the name to know. Ormat is a builder and operator of geothermal plants and supplier of related equipment. The company has built geothermal power plants with more than 1.4 GW in aggregate capacity in more than 20 countries around the world, and currently owns and operates 707 MW of geothermal capacity worldwide.

Among the negatives, Ormat has an unusual dividend policy, especially for a utility. The company has stated that it expects to distribute at least 20% of its annual profits in the form of dividends, but it can reduce or suspend that distribution in order to meet business obligations. Thus, the company’s last three dividends have been 6 cents a share, 31 cents a share, and 7 cents a share. On an annualized basis, this translates to a paltry 1.1% dividend. On the other hand, Ormat shares have appreciated by more than 30% year-to-date, and by 175% in the past five years.

Geothermal power is more suitable than wind or solar power for conservative investors looking for some exposure to renewable energy. The space has grown steadily for many years, and the technology is one of the most mature among renewable options.

However, there are few companies focused primarily on geothermal power. Ormat Technologies is one, and it has managed steady growth for several years running. However, despite its utility classification, it’s more of a growth story than an income play.

For in-depth analysis of companies across the energy spectrum, please consider subscribing to The Energy Strategist.