In the most recent issue of The Energy Strategist, I provided a summary of many of the recent land deals in the Permian Basin. We often lose sight of the importance of the Permian Basin since it is so close to home, but it’s probably not an exaggeration to call it the hottest oil play in the entire world.

In fact, despite producing oil continually for nearly 100 years, the greater Permian Basin is still gushing 2.2 million barrels per day (bpd), behind only Saudi Arabia’s Ghawar field globally. Further, the remaining resource base in the Permian Basin is among the largest of any oil field in the world.

So, although I realize the Permian is a regular topic in this column, it’s hard to overstate its importance to the U.S. oil industry. I could probably write a new column every week on a different company or development in the Permian. It is an area that oil and gas investors need to know.

The Permian has some of the lowest breakeven costs of any oil field in the U.S., with plenty of wells breaking even below $40 a barrel (bbl). That’s why, despite the overall downturn in the U.S. oil industry over the past two-plus years, production in the Permian continued to grow. In fact, production there has doubled in the past five years: 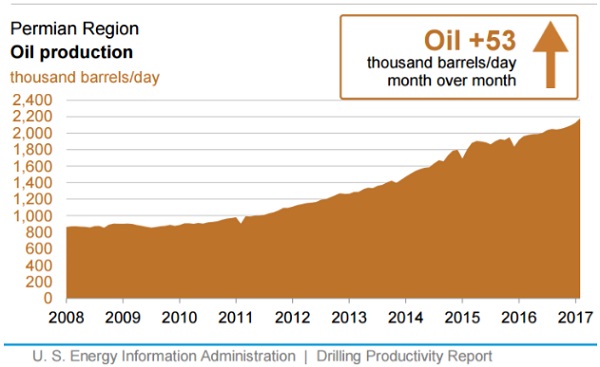 This wasn’t the case in either the Bakken or Eagle Ford, where production declined 10-20% from the peaks of 2014-15. The attractive economics of the Permian, and the prospect of higher oil prices in response to OPEC’s production cuts, have spawned a land rush. Permian acquisitions totaled $28 billion in 2016, with another $12 billion committed already in 2017. Prices for the drilling rights have ranged from under $20,000 to more than $50,000 per acre.

If I listed the Permian’s major oil producers and acreage holders (which I did in the latest Energy Strategist), most of the names wouldn’t be a surprise. You see familiar ones like Occidental (NYSE: OXY), Chevron (NYSE: CVX), Apache (NYSE: APA) and ExxonMobil (NYSE: XOM).

Parsley Energy went public in May 2014, just before oil began its precipitous fall from $100/bbl. By December 2014 the company’s shares were down by nearly 50%, but the share price has doubled over the past year. Today, despite the steep decline during 2014, shares are up by 46% since the IPO less than three years ago, though investors had to endure a gut-wrenching ride to achieve those returns.

Parsley recently announced two deals for acreage in the Permian. Last week the company said it would pay $2.8 billion for about 71,000 acres belonging to Double Eagle Energy Permian, a company that many believed would soon carry out its own IPO. This acquisition follows a $607 million deal in January that added 23,000 net acres to Parsley’s Permian footprint.

The two acquisitions boosted Parsley’s position to about 227,000 acres, which includes 179,000 net leasehold acres in the prolific Midland Basin — a major oil-producing area in the eastern part of the Permian Basin. In the press release announcing the second acquisition, Parsley said the new acreage gives it the second-largest Midland Basin net acreage position among publicly traded E&P companies, presumably behind Apache (NYSE: APA).

There are two criticisms that can be offered up regarding these acquisitions. One is that the Double Eagle acquisition was at the upper end of the price range per acre for recent Permian deals. The second is that the company launched a secondary share offering and increased debt to fund these acquisitions. Investors have not appreciated these moves, which have helped knock 10% off the share price in the past month.

Parsley is positioning itself to be a major player in the Permian, but has yet to convert its acreage into significant production. There are no assurances that its moves will deliver growing cash flow in the coming years. Nevertheless, the company should be on your radar. While we do not have it in our portfolios at the moment, we do recommend other Permian producers that have proven rewarding thus far.

But we are also well aware of the potential for a boom to become a bust — something the Permian has experienced many times in the past. Join as at The Energy Strategist as we guide investors through these investment cycles.