The Ultimate “Trump Stock” to Own Now

As Donald Trump struggles to implement his agenda, investors are starting to question Wall Street’s narrative of “Trump stocks.” Amid today’s bitter political stalemate, can you really pinpoint which companies will thrive under Trump’s policies?

Actually, you can — if you know where to look. In our view, the ultimate Trump stock is Honeywell International (NYSE: HON), the U.S.-based multinational conglomerate that provides a variety of consumer products, engineering services and aerospace systems.

“If there’s such a thing as a Trump stock, Honeywell International is it. The company is a trifecta for the three sectors set to benefit most in a Trump administration: energy, defense and infrastructure.”

Honeywell would continue to do well, even if a Democrat were in the White House, but under Trump’s policies it faces a bonanza of demand from several industries, especially the military. Here’s the sweetener: Honeywell already belongs to the Personal Finance Growth Portfolio.

Since HON was added to the portfolio on May 11, 2011, the stock has generated a juicy total return of 133.4%, with further gains likely. Let’s take a closer look. 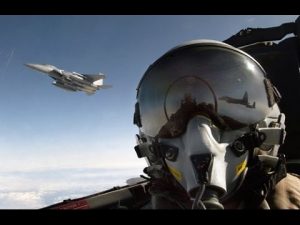 With more than 130,000 employees in 70 countries, New Jersey-based Honeywell is one of the largest industrial conglomerates in the world.

Honeywell specializes in aviation but it’s also a great cyclical play on overall economic growth, because it makes electronic controls for a variety of basic industries.

Honeywell is a pervasive supplier of avionics to both the military and civilian aerospace sectors. Aviation is in the midst of a huge resurgence, and Honeywell’s brand-name products are found in the cockpits of almost every major aircraft model.

Founded in 1906 and now boasting a market cap of $94.3 billion, Honeywell is one of only a handful of avionics manufacturers with the engineering prowess and capital resources to quickly adapt to changes in aviation regulations. That insulation makes Honeywell a technology company that doesn’t have to worry about competition from any Silicon Valley upstarts.

Honeywell is a blue-chip industrial company that rises on growth, which should hold it in good stead as the recovery continues. Passengers in developing and developed countries are eagerly buying plane tickets again. Better still, anxious countries in the Middle East and Pacific Rim are clamoring for military aircraft that are stuffed with Honeywell’s proprietary (and high-margin) electronic gear.

But Honeywell also is diversified, providing safety against the volatility and market correction that’s likely ahead. That makes Honeywell not only a Trump play but a perfect “survivor stock” as well.

Jim Pearce also serves as head of portfolio strategy for Investment Daily. He elaborates on his enthusiasm for Honeywell:

“The beauty of Honeywell is that it is primarily in the business of making the products of other companies perform better by adding mechanical and electronic controls to that equipment. So no matter which jet plane or helicopter manufacturer wins a government contract, one or more of Honeywell’s control systems most likely will end up in that aircraft.”

Booming overseas demand for attack helicopters and combat fighter aircraft is a major tailwind for HON.

The U.S. generates more foreign sales of weapons systems than any other nation on earth; one of America’s fastest-growing military export niches is aircraft. Fixed-wing combat airplanes account for one third of all global arms transfers, with U.S.-based manufacturers topping the list of sellers.

As tensions rise in regional hot spots, especially in Asia and the Middle East, emerging nations are buying aircraft that can’t fly without Honeywell’s hardware.

This position buffers Honeywell against the cyclical ups and downs of the markets and global economy. In particular, the company’s dominance in military jet cockpits provides insurance against the vagaries of monetary and fiscal policies.

The average analyst expectation is that Honeywell’s year-over-year earnings growth will reach 3.8% in the current quarter, 2.9% next quarter, 6.7% in the current fiscal year, 8.8% next year, and 6.9% over the next five years (on an annualized basis).

And yet the stock’s trailing price-to-earnings (P/E) ratio stands at a reasonable 20, roughly in line with the average trailing P/E for its peers.

Got a question about Trump stocks? Send me an email: mailbag@investingdaily.com — John Persinos

As we’ve just explained, Honeywell is among the few stocks that truly live up to the media’s oft-repeated theme of a Trump stock.

But we’ve found a way for you to make money, regardless of policy agendas and uncertainty in Congress.

When a call comes up on the calendar, Linda sends out an alert to her subscribers with all the details they need: the date and time of the call, the number to dial, how to trade the data, and when to sell to pocket profits.

The next call is rapidly approaching; you’d better get ready now. To learn all the details click here.