Don’t Fear Black Swans… Look Them in The Eye!

With destabilizing developments unfolding in Syria, North Korea and Russia, investors are increasingly worried that a “Black Swan” could devastate their portfolios. The term describes a shocking, unexpected event that confers disproportionately high consequences.

The anxiety is especially acute in the energy sector, where any whiff of bad news can send oil prices either plummeting or skyrocketing. Below I spotlight an investment that’s uniquely positioned to profit from today’s volatility in the energy patch.

Robert is one of the world’s foremost experts on the oil and gas industry. Sure, he frequently appears on television, but he isn’t one of those preening pundits with manicured hands who talk tough but know little.

Robert has two decades of in-the-trenches experience in a wide range of fossil fuel and biofuel technologies. He earned his master of science in chemical engineering and a bachelor of science in chemistry and mathematics (double major) at Texas A&M University.

It’s only logical for Robert to serve as chief investment strategist of The Energy Strategist. In his quest to generate market-beating gains for his followers, Robert gets out into the field as often as he can to observe market dynamics with his own eyes.

The guy in the freezing snow is Robert, inspecting an oil field in the Permian Basin in Texas. 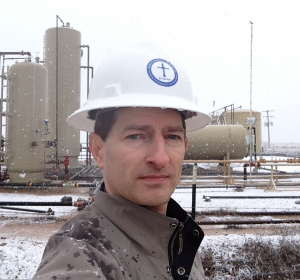 One question Robert gets a lot these days is how the strife in Syria will affect oil markets. Although Syria’s oil output is relatively small, the long-suffering Middle Eastern country exerts an outsized influence on geopolitics and financial markets. Robert puts the matter into perspective:

The nightmare scenario for oil supply is that the conflict spreads to nearby countries that are major oil producers, and that could have a bigger impact on oil supplies. For instance, if any conflict ever spreads to Saudi Arabia, and curtails even 10% of its production, there would be a sharp and swift spike in oil prices…

Black Swans in the oil market are almost always swift and to the upside. Think OPEC oil embargo of 1973. Or the first Gulf War. There are many scenarios where the price of oil could double swiftly. So if you are the kind of person who makes those small, Black Swan bets on the direction of oil, bullish is the way to go.”

Oil prices have staged a stunning comeback in recent months after crashing to a 13-year low of $26 a barrel in February 2016. Now, some of the best minds in the oil industry — people like Robert Rapier — are projecting that this oil price rally has legs.

The global economic recovery appears to be on track, especially in the U.S., ensuring sufficient demand to keep energy prices from collapsing again. At the same time, although the inventory data is often contradictory, supplies appear to be tightening.

Energy companies generally need oil to exceed $50 per barrel for them to “break even” on their operations. The price of West Texas Intermediate (WTI) now hovers at $53 a barrel, but if you listen to some of the most influential experts, oil will shoot considerably higher.

Raymond James & Associates recently forecast that oil should reach at least $80 a barrel by the end of this year, as demand picks up and the global oil glut eases.

If the bulls are right about oil prices and you’re an aggressive investor with an appetite for risk, you can reap a windfall on energy’s momentum by purchasing the Citigroup Global Markets Holdings ETN (NYSE: UWT), an exchange-traded note that was launched on December 8, 2016.

UWT is a levered product. With three times long leverage, UWT triples the performance (up or down) of its benchmark index on a daily basis.

UWT’s management fee is a bit high at 1.50%, but when oil prices spike you can make huge gains. Case in point: from last Thursday when President Trump ordered the Tomahawk cruise missile strike against Syria to the market close on the following Friday, UWT jumped 6.65%. UWT moves in tandem with oil prices, which means it also can go down. But trends favor the energy bulls.

UWT is only suitable for investors with strong stomachs. However, instead of running from the Black Swan, this investment lets you stare it in the eye.

Got any questions or comments? Shoot me an email: mailbag@investingdaily.com — John Persinos 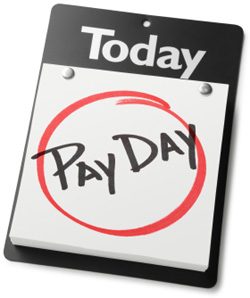 Jim Fink, chief investment strategist of Options For Income, has devised a trading system that systematically hands investors gains every week. It’s like getting a paycheck that you can schedule on a calendar. As Jim explains:

“My goal in developing this approach was to produce consistent income on a weekly basis, unlike the quarterly dividends most investors are used to. I’ve found that those longer time periods aren’t a frequent enough source of cash for a lot of investors.”

Jim has produced winners 85% of the time. He built a personal fortune of over $5 million using his strategy, and now wants to teach you the simple steps to follow his example.