3 Gold Plays For The New Era of Chaos

Regardless of your political persuasion, one fact is clear: The unpredictable actions of America’s impulsive president are a recipe for incessant market volatility. That spells gold mania in 2017 and perhaps well beyond.

Highlighted below are three top-quality plays on gold that offer both protection and market-beating capital appreciation.

The headlines get more alarming with each passing day. Is your portfolio prepared? In addition to rising risks at home and abroad, the stock market’s nosebleed valuation should concern you. The cyclically adjusted price-to-earnings (CAPE) ratio shows that the S&P 500 is overvalued by more than 83%. Meanwhile, the so-called “fear gauge,” known as the VIX, has surged more than 7% since November.

Accordingly, the price of gold has climbed to a five-month high and currently hovers at about $1,278 an ounce. Jim Fink, chief investment strategist of Options For Income, sums it up:

“The stock market has gone parabolic to the upside, which leads to greater volatility and increased uncertainty… Every portfolio deserves a gold hedge.” 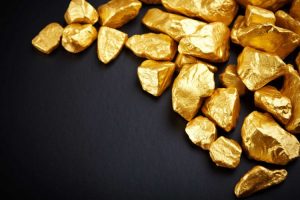 Gold prices are on an upward trajectory that appears to enjoy sustainable momentum. Forecasts vary, but bullish sentiment predominates.

RBC Capital Markets (NYSE: RY) recently increased its gold forecast and now expects prices to rise to $1,500 this year, up from the bank’s previous forecast of $1,300/oz. Credit Suisse (NYSE: CR) concurs with that forecast.

Investors are fleeing to gold and other safe haven assets amid heightened anxieties over North Korea, Syria and Russia, as well as the looming French presidential election in which far-right nationalist Marine Le Pen is a serious contender. The first round of voting occurs on April 23.

If Le Pen pulls off a Trumpian upset and actually wins the general election in May, it could pave the way for “Frexit,” whereby France follows Britain’s example and exits the European Union. The consequences for global equities would be dire and gold prices would skyrocket.

As if President Trump’s Tomahawk cruise missile strikes last Thursday against Syria weren’t enough, North Korean President Kim Jong-un on Wednesday warned of a nuclear attack against the U.S. His threat came after Trump sent an aircraft carrier strike group to the Korean Peninsula in an attempt to bring the saber-rattling Jong-un to heel. Let that sink in: a foreign power this week actually threatened to nuke the United States.

In Moscow this week, U.S. Secretary of State Rex Tillerson has been twisting Russian President Vladimir Putin’s arm to ditch his ally Syria following last week’s chemical attack by the Syrian government against civilians. The meeting has not gone well and the two nuclear superpowers are now at odds, which is surprising considering Trump’s promises during the campaign and in the early days of his administration to forge a tight alliance with Russia.

Meanwhile, the maladroit efforts last month of the White House and the GOP to replace Obamacare suggest that Trump’s promises of tax reform, deregulation, and higher infrastructure spending could run into trouble as well.

The confusion doesn’t end there. Trump in recent days has embraced China and retracted many of his accusations against the country, when before he routinely condemned it. The president even intimated this week that he might reappoint Federal Reserve Chair Janet Yellen, after previously excoriating her in the harshest terms.

Yikes! It all begs the question: what exactly constitutes a “Trump play?” 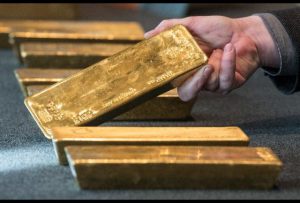 The answer is gold, the classic investment during times of crisis. Also fueling the demand for gold is inflation, which has been showing signs of new life.

When gold prices are on the way up, the biggest profits come from plays that tag along for the ride. Gold exchange-traded funds (ETFs) hold bullion as their only asset but trade just like regular stocks. They move directly in tandem with gold prices.

We recommend the SPDR Gold Trust, the most popular bullion ETF and the most liquid physically backed gold offering available. GLD seeks to replicate the performance, net of expenses, of the price of gold bullion. Launched in 2004, GLD was the first gold ETF in the U.S.

Gold mining stocks also follow the price of gold, but they entail more risk because these companies also need to contend with the trials and tribulations of running mining and production operations. However, when there are profits, they tend to be very big.

With a market cap of $13.36 billion, Goldcorp enjoys many advantages over its more volatile rivals, including production growth combined with low cash costs; a strong balance sheet; and operating jurisdictions that are politically safe.

Those with a higher tolerance for risk are reaping some tremendous profits from junior gold miners. These small mining companies not only make prime takeover targets, but as a whole have been strongly performing asset classes this year.

Osisko Gold Royalties (TSE: OR) is a promising gold play that receives a stream of royalties from junior miners with prospect-filled properties in Québec, Ontario and other areas in Canada. With a modest market cap of $1.61 billion, Osisko is positioned for acquisition by a major gold miner. If that happens, the stock would go through the roof. The average analyst expectation is that Osisko’s year-over-year earnings in the next quarter will increase by more than 33%.

Mark your calendar for weekly payouts… 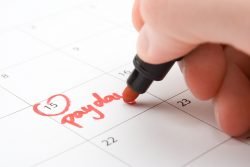 Yearning for steady income in a troubled world? Jim Fink, the brains behind Options For Income, has developed an investment method that allows you to collect payments every Thursday, similar to a paycheck. Think of Jim’s trading system as a “profit calendar.”

These payouts can range in value from $1,150 to $2,800, but generally average out to $1,692.50. The beauty of this moneymaking strategy is that it doesn’t care about geopolitical risk or the shenanigans in Washington. It just cranks out gains like clockwork.

Isn’t that the sort of reliability you could use these days? It’s time to start generating the extra money any smart investor deserves to make — and which Jim is now offering. Click here to learn more.