The VR/AR Market: Worth $108 Billion… in Very Real Money

It’s not just the children in my family who are enamored of virtual and augmented reality games. A few of the adults in my orbit who still cling to adolescent pleasures (I like to call them “kid-dults”) are VR/AR addicts as well.

But if you think VR/AR is merely the province of the geeks, gamers and Peter Pans in your midst, think again. It’s more than a booming leisure activity — it’s also a social and business phenomenon. The technology has become mission-critical in engineering, architecture, aerospace and automobile manufacturing, health care delivery, drug development, military training… the list of commercial applications goes on.

Below, I highlight the best pure play on the VR/AR revolution.

“Commercials for Google’s virtual reality headset are everywhere these days and so are online ads for Microsoft’s augmented reality HoloLens. Although VR and AR were initially the province of video gamers and 3D movie enthusiasts, these ads appear in mainstream media, a sure sign that the technology’s commercial use has reached a tipping point.”

According to the latest data from industry consulting firm Digi-Capital, annual revenue from VR/AR is on track to reach $108 billion by 2021, up from only $3.9 billion in 2016.

Jim also is the director of portfolio strategy for Investing Daily and director of our Wealth Society, so he knows a thing or two about promising investments. And he’s big on VR/AR:

“The commercial applications for VR and AR are, ah, virtually limitless. In fact, many smartphone apps already provide an inkling of what VR and AR can do…

To truly get the most from these applications, users need a more immersive form of hardware such as a virtual reality headset, essentially goggles with a visual-imaging device.”

Coming to a headset near you… 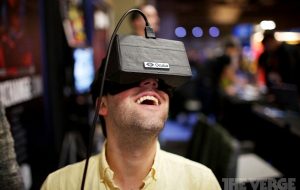 I realize that your investment decisions are getting tougher. A looming federal government shutdown, an overvalued stock market, and worsening geopolitical instability are only a few of the risks you face. That’s why you need to stick to “momentum trends” that will continue to unfold regardless of turmoil in the broader markets.

One such trend is burgeoning demand for VR/AR, which brings me to Himax Technologies (NSDQ: HIMX), a standout investment in the industry.

I’m not alone in my favorable view of Himax. Our publication Breakthrough Tech Profits added HIMX to its portfolio in May 2016. And the strategists at Morgan Stanley (NYSE: MS) have this to say: “We think Himax is the best play on the emerging VR/AR trend.”

Founded in 2001 and based in Taiwan, Himax currently supplies, or is expected to supply, display circuits to the most popular brands in VR/AR reality headsets, including Facebook’s (NSDQ: FB) Oculus Rift, Microsoft’s (NSDQ: MSFT) HoloLens, and the second generation of Alphabet’s (NSDQ: GOOGL) Google Glass.

For VR/AR apps to achieve full potential, they must be stingy with power. Himax on April 13 took an important step in meeting that challenge, when it announced a strategic investment in Emza Visual Sense Ltd., an Israeli company that develops highly efficient visual sensors that exponentially reduce power consumption.

Sales of Himax’s devices should ignite once VR/AR headsets and smart glasses achieve sufficient economy of scale to bring prices down to a broader segment of consumers. As the supplier of the chips that manage the displays in these devices, Himax stands to be one of the first component suppliers to benefit from increased sales.

With a market cap of $1.2 billion, Himax is positioned to thrive in a year when small- and mid-cap stocks are expected to outperform. The company boasts $195 million of cash on the books (most recent quarter) and operating cash flow of $85 million, giving it sufficient financial wherewithal to weather the volatility of the tech sector and a potential stock market correction. However, the company also is small enough to confer greater growth potential than the Silicon Valley titans.

Himax’s stock has gained nearly 20% year to date, but further upside is likely. The company is preparing to launch new products in the latter part of 2017 and into 2018, which should propel earnings growth.

The average analyst expectation is that Himax will rack up year-over-year earnings growth next year of 60.7%, and 25% over the next five years on an annualized basis. Get aboard now, while shares are still reasonably priced.

Got any questions or comments? Send me a letter: mailbag@investingdaily.com — John Persinos 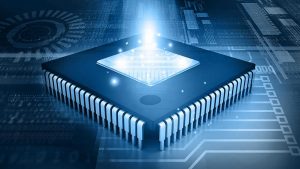 The technology sector is on a roll these days and it’s not just VR/AR.

The benchmark Technology Select Sector SPDR ETF (NYSE: XLK) is up roughly 12% year to date, compared to about 7% for the S&P 500.

One of the surest ways to profit over the long haul in technology is to pinpoint a tiny, unknown entrepreneurial start-up with a lock on proprietary capabilities and invest on the ground floor, before the herd discovers the firm and bids up the share price.

The strategists at Breakthrough Tech Profits had the foresight to invest early in Himax and now they’ve found another rising star that’s about to captivate Wall Street’s imagination.

This company trades at only $4 per share, but it’s on the verge of breaking out. The company’s product isn’t sexy like VR/AR, but without it, scores of firms would grind to a halt. For investors, that’s a sweet place to be.

The time to invest in this obscure tech stock is now, before it shoots skyward. Click here for all the details.