Take a look at the graph below.

The three lines plot the share prices of a gold ETF, gold miner stocks ETF, and a gold royalty company since December 2007—when the gold royalty stock was first publicly traded. Can you guess which is which? 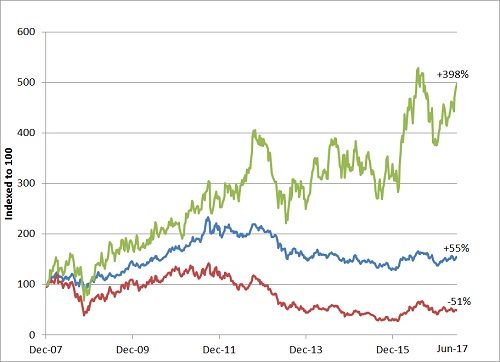 The blue line showing a 55 percent gain over the ten-year period is the gold ETF SPDR Gold Shares (NYSE: GLD). Yup, even though you have probably heard a lot of gloom and doom about gold in recent years, and the yellow metal indeed is well off its 2011 high, gold is still up over the past ten years.

The third line, the green line, represents Franco-Nevada (NYSE: FNV), a gold royalty and streaming company. As you can see, to say that FNV, which has increased nearly five-fold, has outperformed both gold and gold stocks is an understatement.

Franco-Nevada, like miners, generate revenue by selling gold and other precious metals. But the secret to its success lies in its business model.

Mining is a tough business, requiring a lot of patience, intensive capital investment, and jumping through hoops securing permits and approvals from local governments. It takes many years and many millions (in some cases, billions) of dollars to bring a mine from exploration to commercial production. Even if a mine makes it to production, operations are fraught with risks. Suspensions of operations for various reasons and cost overruns are common occurrences in the mining arena.

Cream-of-the-crop producer Barrick Gold (NYSE: ABX) has managed to bring its all-in-sustaining cost down to roughly $730 per ounce, best among the senior producers, but others like Newmont (NYSE: NEM) and Goldcorp (NYSE: GG) are still in the $800’s and $900’s range. Lately, mining companies’ costs have generally trended downward, but the cost reduction is partially attributable to a fall in energy prices—mining is very energy-intensive—so the cost savings may not be permanent. When metals prices fall, margins are squeezed and paying off their debt—often mountainous— becomes a problem.

With gold prices mired in a trading range in recent years, increasing earnings (through production growth) while containing costs has been a difficult challenge for miners to tackle.

On the other hand, Franco-Nevada merely provides funding to mining projects in exchange for a claim to a certain percentage of the assets’ future production or simply a cash royalty. The bulk of the company’s royalty agreements are based on the miners’ net revenues, rather than net profits, which represents another layer of insulation against future rise in mining costs. The company does not operate any actual mines.

The company owns stake in 41 producing precious metals assets, with another 34 in advanced stages of development—defined by the company as having potential for production within the next five years—and another 135 in the early, exploration, stage. Overall, counting other types of assets such as base metals and oil and gas, Franco-Nevada’s investment portfolio consists of 339 assets. But with precious metals contributing about 90 percent of revenues (gold 70 percent, silver 14 percent, and platinum group metals 6 percent), its primary business, which has served it very well, is gold and other precious metals.

Naturally, Franco-Nevada isn’t completely immune to downswings in the precious metals market, but clearly it’s not nearly as vulnerable as its mining counterparts. A down cycle in the mining industry is actually shopping season for Franco-Nevada because the more financially-distressed miners there are, the more opportunities there are for the company to buy high-quality assets at a discount, which adds to potential future growth. In fact, with no debt and roughly $1.5 billion in dry powder, Franco-Nevada still has plenty of purchasing power left.

With each passing quarter Franco-Nevada is setting new company records in revenues and GEOs (gold-equivalent ounces), thanks to past investments coming online, which has been tailwinds for the stock price. GEO is a measure of how much gold it has claim to.

Neither miner nor ETF, Franco-Nevada offers the attractive qualities of both. Unlike GLD, FNV offers leverage to gold prices. But at the same time, unlike miners, it has limited exposure to operating risks and costs. As its stock price history proves, it’s worthy of heavy consideration for anyone interested in investing in gold.