The Fed Deserves a Tickertape Parade

The Federal Reserve will raise the federal funds rate later today; its plan to do so is the worst-kept secret in a capital overflowing with Trump leaks.

It will thereafter use its trading of short-term government debt to keep the rate financial institutions charge each other on overnight loans between 1% and 1.25%, on an annualized basis. The Fed Funds rate is a measure of liquidity the Fed’s providing in its role as manager of the money supply, as it pursues its dual mandate of stable prices and maximum sustainable employment.

Frankly, I’m disappointed but not surprised there will be no literal tickertape parade for the Fed today on Wall Street, in the data centers of Jersey City and wherever else capital hangs out these days.

Because Fed’s looked heroically successful of late in its execution of its statutory mission. 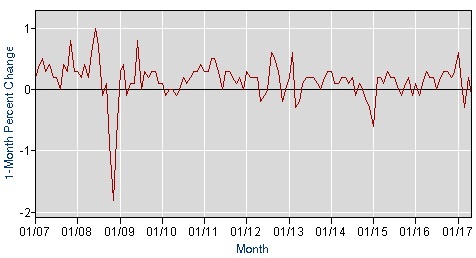 As you can see, if consumer prices were any steadier we’d need to check their pulse. Cope CPI excluding volatile food and energy prices is up 1.7% over the past year, slightly below the 1.8% average inflation rate over the past decade and the Fed’s target of 2%.

Scaremongering about money-printing, hyperinflation and the like has been exposed as the hyperventilation some of us always knew it was. Whether promoted out of ignorance or cynicism, it’s been very costly for some investors in terms of investment income foregone out of unfounded fear of economic mismanagement and collapse.

Now let’s turn to the other half of the Fed’s mandate, maximum sustainable employment. The unemployment rate’s ups and downs over recent decades suggest we’re just about there.

An alternative unemployment measure including people who’ve given up looking for work and those working part-time because they can’t find a full-time gig, often cited by critics of this eight-years-young economic recovery, is also approaching past cycle lows: 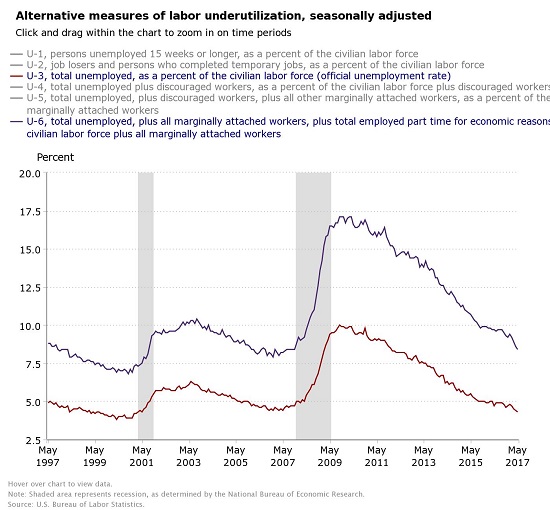 Of course, the hedge fund managers who’ve previously accused the Fed of hurting savers and feeding the economy too many metaphorical jelly donuts aren’t going to apologize. It’s not in their nature and, besides, some of them need to concentrate on their own recently disappointing performance.

The media isn’t going to change stripes either. It’s already bemoaning the potential effect of the coming rate increase on “millions of borrowers.”

Income investors should take heart from the Fed’s phenomenally successful track record as the central bank ponders the tricky business of shrinking its balance sheet, a process that might get under way later this year.

As a general rule of thumb, if someone tells you to invest or not to invest because of a causal chain involving the Fed, ignore them.

The Fed’s main task is to supply enough currency so that the economy runs as close as possible to its sustainable full potential, and it’s been very good at that in the wake of the global financial crisis. It’s not its fault that the potential has itself declined, mostly as a result of congressional neglect and gridlock.

The Fed’s wisdom is not obsessing over savers should be clear to anyone willing to peruse the quarterly flow of funds data it publishes. The figures show that the U.S. economy generated $485 billion in net interest income last year, but $10 trillion in employee compensation – more than 20 times as much.

Everyone would like to have more income, and the best thing the Fed can do about that is to keep the overall economy as healthy as possible. On that score, mission accomplished.