A Lesson From United

In the latest incident for the company, a middle school teacher’s Facebook post about her unpleasant experience on a United Airlines flight has gone viral on social media. The teacher claims that although she paid $1,000 for a seat for her two-year old son, United gave the toddler’s seat to a standby passenger. She ended up spending the entire flight with her son in her lap, which made for an uncomfortable trip both. United Continental Holdings (NYSE: UAL) was quick to issue an apology, the latest in a string of apologies in recent months.

The highest-profile incident, of course, occurred in early April when passenger David Dao was bloodily injured and dragged off an overbooked United flight. Multiple passengers filmed the incident and posted the videos on social media. The story spread like wildfire to the point where it would be difficult to find anyone who hadn’t heard about United kicking a customer off the plane and putting him in the hospital. It was the epitome of a PR nightmare. Yet as you can see from the chart below, UAL has shown no ill effect from all the negativity and ill will. Rather, it’s trading about 10 percent above where it was when the incident occurred. 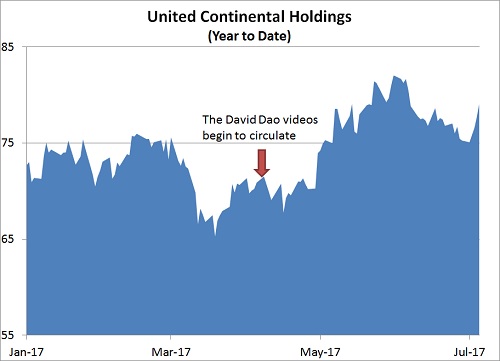 You may have heard the saying that Wall Street is cold blooded. It is true.

As badly as the terrible customer service reflects on United, as long as the market doesn’t believe the bad PR will impact the company’s bottom line, the stock price will be fine. In fact, on the day the Dao videos first surfaced, UAL was actually up for the day. It wasn’t until CEO Oscar Munoz issued an ill-conceived statement that blamed the passenger and included the use of the term “reaccommodating” that the stock reacted negatively.

One bad PR incident per se usually doesn’t matter in the long run for a company, provided that the company properly deals with the situation to minimize fallout. However, Munoz’s initial refusal to accept responsibility on behalf of his company and promise that as leader of United Airlines he will do everything in his power to make sure that a similar incident won’t happen again—which would have helped to calm public outrage—spooked the market. The fear was that the arrogant response added fuel to the fire, increasing the possibility that the incident could snowball out of control and dent the company’s top and bottom lines.

Fortunately for United, Munoz realized his blunder, swallowed a humble pill, and swiftly issued another statement, the type of response he should have issued in the first place. He apologized and promised new policy changes. United settled with Dao out of court before the end of April to give closure to the incident and to take the ugly story out of the spotlight as quickly as it could.

The bad PR may have harmed the company’s image, but so far there’s been no discernible damage done to what really matters to investors. United actually saw 7.6 percent improvement in the number of passengers serviced in April compared to April 2016; the same metric in May showed a 3.2 percent year-over-year increase. (June numbers are not yet available.) In March, before the David Dao incident, the year-over-year increase was 5 percent.

The bottom line: so far the bad PR and the apparent public outrage simply have had no clearly discernible impact on United’s operations.

It helps United that air travelers don’t really have a lot of choice when it comes to airlines. And while United may have become the poster child for bad airline customer service, it’s not the only airline to have had run ins with customers. Americans in general hold a negative view of the domestic airline industry. The frequent bad PR may look bad, but ultimately air travelers will likely still base their airline decision on convenience, price, and reward incentives, especially when there isn’t a great difference in customer service.

The lesson to be learned here is that as embarrassing as bad PR can be for a company, when it comes to investing bad PR often makes no difference for a company. Investors need to carefully consider industry dynamics and customer behavior when determining whether a stock that drops due to bad PR is a buying opportunity or a reason to get out. In United’s case, the only tangible negative impact on its financials may be incurring higher costs to try to fix its brand image and more rigorously train employees to properly treat customers. On the other hand, if, for example, reports begin to surface that patients are dying from taking a pharmaceutical company’s drug, then that’s definitely not something to take lightly because it could mean that company could experience significantly reduced sales or be forced to stop selling the drug completely.