Be careful what you wish for is great advice in life and even more so for investors. Case in point: the recently anemic stock dividend yields, during a time when low interest rates have many retirees (and younger Americans as well) scrambling for reliable sources of investment income.

As that last data point suggests, a high composite dividend yield is usually not a sign of market health, though it can signal an attractive long-term buying opportunity. The S&P 500 dividend yield topped 12% in 1932 and 8% at the end of 1941, but you wouldn’t have enjoyed owning stocks in the run-up to those milestones. They obviously reflected massive market price declines rather than a dividend cornucopia.

By the same token, today’s relatively modest yield is the product of rising share prices rather than diminished payouts. In absolute terms, S&P 500 companies paid out a record $104 billion in dividends for the second quarter of 2017. S&P dividends are on pace to increase 7% this year, according to Howard Silverblatt of S&P Dow Jones Indices.

Here’s how that shrinking S&P dividend yield looks over the last two decades in absolute dollar terms, via Yardeni Research: 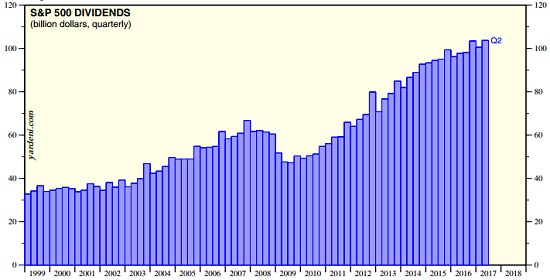 What’s more, the rate of dividend increases could accelerate somewhat in the coming months. Banks, constrained until recently from delivering bigger yields by the Federal Reserve’s focus on their capital ratios, received approval for larger hikes as a result of the most recent annual stress tests carried out by the Fed. For example, Citigroup (C) promptly doubled its dividend.

Passage of tax reform that would give U.S. companies an incentive to bring home cash held overseas could serve as another catalyst. Hopes for such relief have faded some of late amid continuing legislative gridlock in Washington, but corporate tax breaks remain a top priority of the Republican majority in Congress as well as the Trump Administration.

Of course, to focus solely on dividends is to miss another, even larger stream of corporate returns to shareholders from share repurchases. While buybacks have slowed over the last year, they’re still set to return more than $500 billion to S&P 500 shareholders in 2017. The combined yield of S&P 500 dividends and buybacks is still a tempting 4.5%, supported those companies’ projected 5.8% forward earnings yield based on analysts’ estimates.

Of course, buybacks are not as valuable as dividends on the whole: for one thing, studies show that companies tend to be terrible timers of the fluctuations in their share price, buying high more often than low. But that general tendency conceals a lot of variation, and companies that do manage to repurchase their stock at a discount create value for present and future shareholders as well as those who sold. Many public companies disclose the amounts of their repurchases and their average price in quarterly and annual earnings filings with the Securities and Exchange Commission.

Ultimately, as I’ve argued before, recurring free cash flow is the best guide to how much income companies can return to the shareholders via dividends and buybacks. Free cash flow is simply cash from operations less capital expenditures. It’s what informs us, for example, that Vodafone (VOD) is fully covering its dividend yielding 5.6%, while ExxonMobil (XOM) is still borrowing to some of the cash it’s doling out as dividends with a current annualized yield of 3.8%.

We’re not yield hogs at Income Millionaire; our recommendations typically have attractive cash flow with strong potential for capital appreciation based on business fundamentals and macroeconomic trends. I hope you can join us.