The explosion of social media, fueled by the proliferation of smartphones, in the last decade has greatly changed the dynamics of marketing. Modern businesses in the digital age do themselves an injustice if they neglect social-media as a way to engage their audience and prospective customers.

The most successful social media company Facebook (Nasdaq: FB) attracts 2 billion monthly active users to its website and app; it rakes in about $30 billion (and growing) a year in advertising revenue, more than 85 percent of which is through mobile users. Others, like Twitter (Nasdaq: TWTR), are still struggling to earn a profit. There’s no doubt Twitter is a very popular platform, but despite the hype, the company has had trouble turning relevance into revenue and its stock has been a dog.

While Facebook stock trades at about $170 a share now, there was an extended period in its early days when the share price languished well below the $38 IPO price. It wasn’t until the company proved that it could consistently monetize its massive user base—particularly the mobile users—that the share price took off. As far as the market is concerned, for social media companies, while popularity is a prerequisite that can generate hype around a stock, eventually they must demonstrate a path to top- and bottom-line growth.

That brings us to the case of Snap Inc. (NYSE: SNAP). The company offers the image messaging and multimedia mobile application Snapchat, which quickly became very popular among teens and young adults. By the time the company listed on the New York Stock Exchange in a ballyhooed IPO priced at $17 a share (valuing the company at about $24 billion overall, the second-largest tech stock IPO ever, behind only Facebook), it had roughly 160 million daily active users.

Yet despite strong initial demand thanks to plenty of media hype, the market quickly turned against SNAP. During the first week of trading, SNAP reached as high as $29 and change a share in intraday trading, but as of last Friday, the shares closed trading below $14. 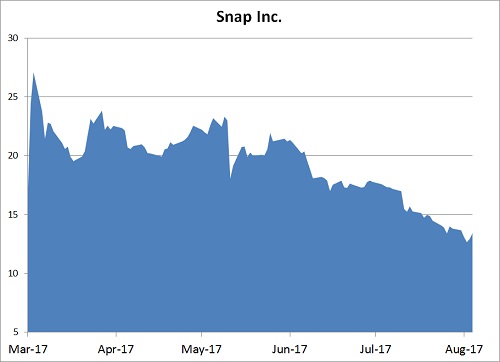 User growth is slowing. In its first (and only so far) reported quarter since the IPO, the daily-active-user count only increased to 166 million, or approximately a 5 percent increase from the end of 2016. By comparison, Facebook’s Instagram reached 250 million daily active users (and 700 million global users overall) as of June and the user base is growing rapidly—Instagram only reached 150 million daily active users in January; that’s a 67 percent increase between January and June.

That’s Snap’s big problem: It is up directly against Facebook, the juggernaut whose $3 billion offer it turned down in 2013.

According to Facebook, there are more than one million advertisers on Instagram and about a third of the most viewed posts on Instagram Stories are businesses using the post. In other words, Instagram is popular with businesses seeking to interact directly with potential customers in a fun and not blatantly “salesy” way.

Since the hugely popular flagship Facebook social-media platform already links to the apps that offer the same capabilities as Snapchat, there’s no compelling reason for people to migrate to Snapchat. And whatever new gimmick Snapchat may come up with, Facebook likely will be able to copy it again. For Snapchat, which must attract more and more eyeballs—and hence, advertisers to make money—to grow, the outlook is not good.

The lesson here is that while it is easy to get caught up in the media hype about Wall Street’s “next big thing,” retail investors must try to evaluate a company objectively. Popularity isn’t enough; there has to be visible path(s) to revenue and earnings growth. Often it’s better to wait until the euphoria quiets down to buy. Remember, although FB has been a fantastic stock in the last several years, in its early days the stock was a major laggard despite massive hype surrounding its IPO.

As for SNAP, the outlook is cloudy to say the least. The stock’s future trajectory seems more likely to follow that of TWTR, and not FB.