An Under-the-Radar Investment Theme Worth $3.8 Trillion

The messy demise of Trumpcare last month was a legislative Waterloo for the Trump administration. Despite controlling the White House and both chambers of Congress, the Republicans couldn’t make good on their seven-year promise to repeal and replace Obamacare.

While lawmakers are away on their August vacations, the consensus on Wall Street and in corporate C-Suites is that Trump’s pro-business agenda has stalled. Accordingly, many analysts who once touted building and construction stocks as “Trump plays” are considerably less bullish on the sector, citing the improbability of major infrastructure legislation making it through a bitterly divided Congress.

But once again, the conventional wisdom is looking at the wrong picture. Here’s what the news media aren’t telling you: States and localities are gearing up to spend considerably more money on infrastructure, even if Uncle Sam won’t.

Greater state and local infrastructure spending is an under-the-radar trend; you’ll never see it covered by the talking heads who pass for journalists on television. Rest assured, though, that the money for these infrastructure projects isn’t a vague campaign promise — it’s real and already budgeted. Below, I pinpoint three stocks that benefit from this stealthy investment theme.

Meanwhile, the aging bull market refuses to die. Trumpcare’s failure in July bodes poorly for the president’s other promises, notably tax reform and his federal infrastructure plan. But traders have swallowed their disappointment and moved on.

The Dow Jones Industrial Average and the S&P 500 this week reached new highs once again, fueled by robust corporate operating results and favorable economic indicators. So far, about 82% of S&P 500 companies have reported second-quarter results, with about 52% posting better-than-expected earnings and revenue.

However, while second-quarter earnings are good, they’re not good enough to justify excessive valuations. For the select stocks highlighted below, the catalyst for market-beating growth will come from fiscal stimulus that’s provided by unexpected sources — to wit, by state and local coffers.

States and Localities Take Over

In a study released in July, the Global Infrastructure Hub (GIH), a research organization backed by the G20, reported that $97 trillion is required in global infrastructure investment by 2040. The study also found a $18 trillion shortfall between current investment projections and the spending that’s needed.

Among the 50 nations studied in the GIH report, the U.S. has the biggest estimated shortfall at $3.8 trillion. That’s the staggering price tag to get America’s bridges, roads, sewer systems and other infrastructure up to standard.

The non-partisan group Building America’s Future reports that one third of America’s major roads are in poor or mediocre condition and 45% of major urban highways are congested.

The crumbling infrastructure of the U.S. continues to present a litany of woes: unreliable mass transit; collapsing bridges; exploding tanker cars; leaking pipelines; pockmarked roads and highways. America may be the globe’s biggest economy, but it often resembles a banana republic. Case in point: New York City this summer is struggling with subway system woes of nightmare proportions.

However, while Capitol Hill wallows in acrimony and indecision, state and local leaders are rolling up their sleeves and getting the job done.

According to the National Organization of State Budget Officers, most governors have successfully pushed through big increases in infrastructure spending for 2017 and beyond, financed by bond issues, toll increases, special taxes and other means. These state leaders haven’t waited for the dithering feds; they’ve been proactive and innovative.

In the U.S. general election last November, voters in 25 states approved more than $200 billion in state and local bond and tax initiatives. See our map of voter-approved infrastructure funding by state (data provided by Ballotpedia): 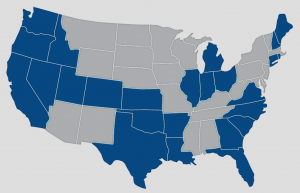 The research consultancy Infrastructure USA reports that several states and local jurisdictions are now reconstructing or proposing to reconstruct highways and bridges without the help of federal grants.

Another state-level trend is the authorization of public-private partnerships for transportation projects.

With a market cap of $5.5 billion, Texas-based Fluor is the largest and most diversified company in its sector, providing engineering, construction and project management services around the globe.

Fluor has its fingers in many mammoth transportation projects, with a revenue mix that provides a measure of stability in an otherwise cyclical business. Fluor also is a major player in nuclear power, which is enjoying resurgence due to concerns over climate change and fossil fuel pollution.

The company’s forward 12-month price-to-earnings ratio (P/E) of 20.2 is roughly in line with its peers. The average analyst expectation is that Fluor’s year-over-year earnings growth will reach 62.3% next year, and 10.4% over the next five years (on an annualized basis).

North Carolina-based Martin Marietta produces crushed stone, gravel and sand, which are called “aggregates” and are mixed with cement to create concrete for the construction of roadways. The company operates in four segments: Mid-America Group, Southeast Group, West Group, and Specialty Products.

With a market cap of $13.4 billion. Martin Marietta also produces chemical additives for ceramics and water treatment, as well as fiber-reinforced polymer products for use in bridge decks, truck trailers, railroad cars and residential construction.

MLM’s forward P/E is a bit pricey at 27.5 but the modest premium is worth it. The average analyst consensus is that MLM’s earnings growth should reach 20.6% in fiscal 2017.

California-based AECOM is an acronym for Architecture, Engineering, Consulting, Operations and Maintenance, an apt summary of its many interests.

AECOM is positioned to profit from a ballot initiative passed last November in its home state of California that calls for a half-cent sales tax increase to plow $120 billion into rail and bus expansions over the next few decades, in addition to street upgrades and pedestrian walkway improvements.

I expect AECOM’s five-year earnings growth to reach at least 5% over the next five years (on an annualized basis). The stock’s forward P/E of 10.2 makes it a bargain.

As America’s states and localities get cracking on their overdue repair bills, these three companies will reap the lion’s share of the spoils. They have the nation’s governors and mayors — not the White House or Congress — to thank.