From Afghanistan to the Middle East to the Korean Peninsula, the news is the same: human strife continues apace. Worsening conflict around the globe is a powerful tailwind for the aerospace/defense sector.

Below, I focus on a booming niche of military spending that’s outpacing the growth of not only the broader markets but the aerospace/defense sector as well: pilot-less drones (aka unmanned aerial vehicles, or UAVs). In particular, I examine three companies that dominate the drone industry: AeroVironment (NSDQ: AVAV), Raytheon (NYSE: RTN), and Boeing (NYSE: BA). These three stocks enjoy an upward trajectory that should prove resistant to the widely anticipated stock market correction.

Our trio of drone stocks received good news this week. Despite his assertions during the presidential campaign that all military efforts in Afghanistan were futile, President Trump gave an address on Monday night that strengthened (albeit in vague terms) America’s involvement in a conflict that bedeviled his predecessors Barack Obama and George W. Bush. Afghanistan now qualifies as America’s longest war.

President Trump’s strategic goals in Afghanistan remain unclear, but the inevitable and tangible result is that more troops, more weapons, and more aircraft will pour into this Central Asian hot spot. And yes, a lot more drones.

Military escalation in Afghanistan was predictable. After Trump’s speech on Monday, the stock market’s response the next day was predictable, too. Wall Street’s animal spirits got racing.

The Dow Jones Industrial Average and the S&P 500 closed Tuesday with one-day gains of 0.90% and 0.99%, respectively. Leading the way was the aerospace/defense sector, especially companies involved in designing, supplying and making drones.

Trump’s bellicose rhetoric has been a tonic for aerospace/defense stocks. Year to date, the XAR has generated a return of 15.49%, compared to about 10% for the S&P 500.

If you’re looking for an investment theme that never wavers, regardless of financial ups and downs and economic cycles, it’s this: The Pentagon always gets its money. Print out that statement, laminate it, and put it in your wallet.

But not just any defense stock will do. Many investors are making the mistake of labeling all defense stocks as “Trump plays” and they’re indiscriminately jumping into the sector. As always, you need to be judicious and apply the right criteria. Some stocks will win and others will lose. Here, I spotlight the clear winners.

Dawn of the drone era… 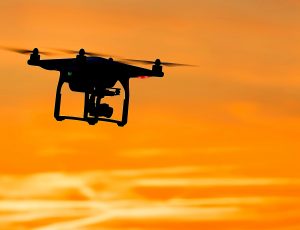 In the harsh environs of battlegrounds such as Afghanistan, drones are vital for our fighting men and women to achieve situational awareness. Drones facilitate integrated communication among ground troops, aircraft pilots, and commanders.

Adequate air support has long been a challenge for American forces in Afghanistan, compelling the tight coordination between helicopter gunships and reconnaissance drones.

The military services are increasingly relying on drones for reconnaissance, as well as to serve as hunter-killers. These flying machines keep flesh-and-blood American troops out of harm’s way. They also expedite the ultimate goal of Pentagon planners to technologically transform the battlefield into a tightly connected web that resembles the Internet of Things.

An expanded presence in Afghanistan is a windfall for our three drone stocks, whether this escalation succeeds or not. The Pentagon’s coffers will get fatter under the hawkish Trump administration and this massive stream of taxpayer money will make its way to the coffers of select aerospace/defense stocks, especially drone plays.

Here’s the kicker: the use of drones around the world is soaring in the commercial sector as well, in a wide range of industries. The following chart tells the story: 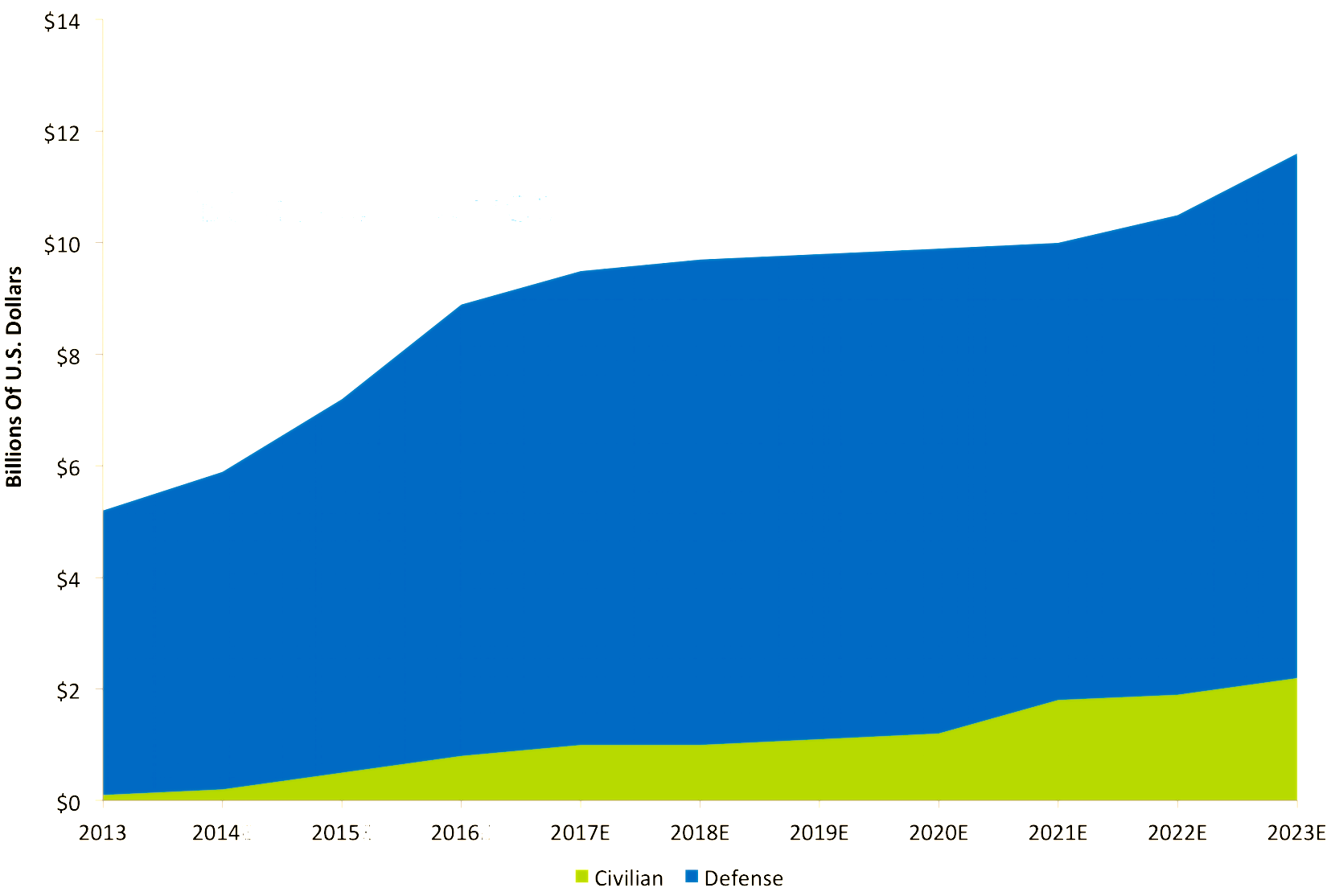 Before I discuss our three drone plays, let’s get one thing straight: no humane person relishes war. Nor do we ever take sides in American politics or policy. We only consider the cold, hard investment facts — and these facts point to market-beating gains for the following drone-related stocks. The added benefit is that by the nature of their products and services, these stocks are correction and recession resistant.

AeroVironment: leader of the pack

The world’s leading manufacturer of UAVs is AeroVironment, a California-based company that boasts a pipeline stuffed with innovative products that the military brass covets and increasingly deploys in the treacherous terrain of Afghanistan.

Particularly useful for U.S. troops in Afghanistan is the company’s RQ-11B Raven UAV, a 4.5-pound drone that’s carried in a soldier’s backpack and launched by throwing into the air. The device wirelessly sends day and night real-time video imagery back to a ground controller for battlefield reconnaissance.

AeroVironment offers a broader array of UAV products than any other manufacturer, especially drones predicated on nanotechnology and capable of pairing with helicopters.

The company’s UAVs provide a range of military and civilian functions and feature such evocative names as Raven, Wasp, Puma and Switchblade. AeroVironment commands more than 30% of the world’s unit production of UAVs, giving it the biggest market share by far of any UAV manufacturer.

The stock’s forward price-to-earnings ratio (P/E) is pricey at 52.40, compared to about 19 for aerospace/defense. Investors are rightfully betting that the world’s largest maker of drones will reap the lion’s share of the spoils from drone demand; cautious investors may want to buy on dips.

That said, AVAV’s growth prospects are robust. The average analyst expectation is that AeroVironment’s year-over-year earnings growth will reach 100% next quarter.

Raytheon: a bet on sensors

The leader in the development and manufacture of UAV sensors is Raytheon. Without sensors, a UAV is a useless fuselage.

Raytheon provides a range of commercial and defense electronics, but UAV sensors are its specialty. These highly sophisticated components allow UAVs to fly, target and shoot without pilots. These sensors also receive, process and submit streams of digitized data back to ground control stations.

Raytheon is the largest guided missile maker in the world and it has long dominated the sensor niche. The company’s sensors provide surveillance, target acquisition, tracking, range finding, and laser designation for UAV missiles and for all NATO laser-guided munitions. Keep in mind, the U.S. leads a 29-nation NATO coalition in Afghanistan, which makes well-funded NATO a Raytheon customer. The company’s sensors also guide the Predator’s Hellfire missiles, which are deployed with growing frequency by U.S. forces in combat.

The average analyst expectation is that Raytheon’s year-over-year earnings growth will reach 12.5% next quarter. The stock’s forward P/E is 21.04, a slight premium to its aerospace/defense peers.

The U.S. Army has no intention of  dumping its time-honored fleet of attack and reconnaissance helicopters, but the service is in the vanguard of exploring ways to team UAVs with their helicopter counterparts — particularly Boeing models.

The Boeing AH-64E Apache has the capability to control UAVs for aerial scouting missions previously performed by the OH-58 Kiowa. Apaches can request to take control of a Textron Systems’ RQ-7 Shadow or General Atomics’ MQ-1C Gray Eagle from ground control stations to scout the battlefield or airspace.

The AH-64E is equipped with cockpit software that enables it to receive data and imagery from UAVs, which use sensors to enhance the “hunter” function of the Apache. Two battalions each comprised of 24  of Apaches paired with UAVs  have seen actual combat in Afghanistan. The teamed aircraft are linked by the Video from Unmanned Aerial Systems for Interoperability Teaming (VUIT-II), developed by Boeing and partners.

Boeing boasts a winning streak in recent weeks of new Pentagon contracts. On Tuesday, the U.S. Air Force announced that it had awarded Boeing a $349 million contract for work on the country’s next intercontinental missile.

These opportunities in the military sector, combined with exploding commercial orders (especially for its Dreamliner 787), put Boeing on a flight path to growth. The average analyst expectation is that Boeing’s year-over-year earnings growth will reach 14.6% next quarter. The stock has shot up by 54% year to date, but the forward P/E remains a reasonable 22.39.