“Green” Plays to Keep Your Portfolio Above Water

Tropical Storm Harvey is proving relentless, as it continues to wreak havoc in Texas and makes a second landfall in Southern Louisiana. In addition to causing fatalities and massive property damage, the storm also threatens the nation’s vital energy hub along the Gulf Coast.

The cruel spectacle is compelling the public to once again grapple with the polarizing topic of human-caused climate change. Republicans generally scoff at the idea of climate change, whereas Democrats lend it credence. The consensus of the scientific community is clear: 97% of scientific studies agree that human-caused global warming is real.

But Mother Nature doesn’t care about politics and white papers. Extreme weather incidents are growing in frequency around the world, regardless of the underlying reasons. For investors, the public policy debate is beside the point. The global epidemic of exceptionally harsh weather means that there’s plenty of green to be made from green investments.

One industry above all others is poised to profit from destructive weather: environmental remediation. As an investor, one of the surest paths to long-term gains is to tap into unstoppable trends. Few trends are as sweeping and inexorable as the growing ferocity of storm incidents.

Below, I examine two environmental plays that benefit when a storm like Harvey hits. One is an individual stock; the other an exchange-traded fund (ETF) for those who prefer less risk. 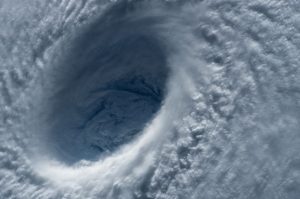 Supposedly rare floods are becoming regularly occurring events, requiring the marshaling of vast resources for clean-up. Indeed, weather experts have called the rain damage from Harvey a 500-year flood (which means a storm of its intensity has a 1 in 500 chance of happening in any given year). The growing frequency of these disastrous floods has turned the exceptional into the new normal.

In the increasingly vital environmental remediation business, I like one mid-cap company in particular: Tetra Tech (NSDQ: TTEK).

As the GOP-led Congress gets ready this fall to slash appropriations for federal environmental agencies, Tetra Tech should enjoy enhanced demand for its services as it steps in to fill the void.

Weather forecasters say the 2017 Atlantic hurricane season has brought above-normal storm activity, as reflected by Harvey and its still unfolding swath of destruction. These concerns are exacerbated by the fact that federal agencies in charge of handling natural disasters lack top administrators and are hobbled by slashed budgets. The National Oceanic and Atmospheric Administration, the Federal Emergency Management Agency, and the U.S. Coast Guard have all borne the brunt of steep funding cuts.

Tetra Tech’s clients include federal, state, and local government agencies in the U.S., as well as commercial and international clients. The company also has a growing presence in the energy sector, for pollution prevention and remediation. Those skills in the energy patch will come in handy, to handle storm damaged refineries, storage facilities and ports along the Gulf Coast.

Since Harvey slammed into Texas this week, 10 oil refinery plants in the Houston area and Corpus Christi have shut down because of the storm. These facilities typically have the capacity to refine about 2 million barrels of oil a day. They include Exxon Mobil’s (NYSE: XOM) Baytown refinery, the second largest in the country after Port Arthur.

ConocoPhillips (NYSE: COP) shuttered all operations in the Eagle Ford shale field and evacuated personnel from offshore platforms in the Gulf of Mexico. According to the Department of Energy, 105 offshore drilling platforms have been evacuated in the Gulf.

As of this writing, Harvey has forced the closing of about 24% of oil production in the Gulf and 26% of the Gulf’s natural gas production. The Gulf is home to one-fifth of total U.S. oil output.

Analysts estimate that about 2.2 million barrels per day of refining capacity have been moved offline because of Harvey. The Harvey-battered Gulf Coast normally exports about 1 million barrels of crude each day to customers overseas. The cost of repairing the Texas energy hub alone is estimated to run into the tens of billions of dollars. Several energy stocks with exposure to the Gulf fell on Tuesday.

When the worst scenario happens… 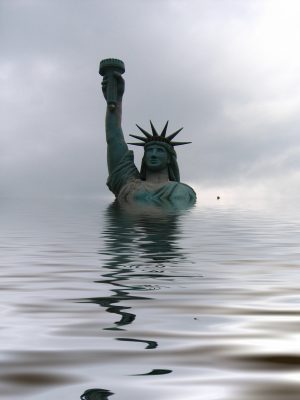 Founded in 1966 and headquartered in Pasadena, California, Tetra Tech prepares facilities, infrastructure and supply chains for the worst — and comes to the rescue if the worst actually occurs.

As environmental crises proliferate around the globe, TTEK will prove a growth stock winner. It already stands in line to receive considerable work in storm ravaged areas of Texas.

Driven by a growing backlog of contracts, the company enjoys earnings momentum. In August, Tetra Tech was awarded a five-year, $113 million contract to provide technical support services for the U.S. Environmental Protection Agency Office of Water.

Demand for nuclear power generates another stream of reliable revenue for Tetra Tech. The company provides a full suite of services to the nuclear power industry, including siting, licensing, administration, and decommissioning of nuclear plants.

At 20% of the U.S. electrical power mix, nuclear is here to stay, regardless of the pending wave of shutdowns. What’s more, Tetra Tech profits from both sides of the nuclear coin; the company’s services are recruited for new construction as well as plant closures.

The average analyst estimate is that TTEK’s earnings per share (EPS) in the next quarter will come in at 53 cents, compared to 49 cents in the same year-ago quarter. For the full fiscal year, EPS is estimated at $2.11, compared to $1.88 last year. Next year, EPS is expected to come in at $2.36. My own calculations show that TTEK is on track to reach five-year earnings growth of nearly 14%, on an annualized basis.

TTEK’s trailing 12-month price-to-earnings ratio (P/E) is 20.9, a bargain compared to the trailing P/E of 44 for its industry. Competitors include Fluor (NYSE: FLR) and AECOM (NYSE: ACM), construction giants that are more diversified and aren’t pure plays on environmental crisis.

TTEK shares currently trade at about $41 per share; the average analyst one-year price target is $50.67, for an implied gain of nearly 24%. Pick up shares of TTEK, before the next storm hits.

If you prefer the safety and diversification of a fund, s standout choice is First Trust Water ETF (NYSE: FIW). This exchange-traded fund is poised for multi-year growth, with no discernible headwinds along the way.

First Trust Water tracks the ISE Water Index, a benchmark of companies that generate a major portion of their revenues from the potable and wastewater industries.

With holdings of 37 water-themed stocks, FIW boasts an asset base of $250 million. Industrial companies with healthy balance sheets make up about three-fourths of the fund, with stable water utilities accounting for most of the rest.

If a stock market correction hits this year, these two green plays enjoy sufficient tailwinds to help keep your portfolio above the water line.