How to Spot (and Avoid) the “Dumb Money” Crowd

Giddy with excitement over a stock market that continually sets new records, many investors these days are saying: “It’s different this time!” Whenever I hear that phrase, I slap my forehead with my palm. Those are the four most dangerous words in investing.

Shouldering more risk because you think the old rules no longer apply is a hallmark of the “dumb money” crowd. Below I’ll reveal ways to navigate the latest self-delusions, with a seven-step survival guide geared toward income investors.

Timeless laws of finance and economics always hold true, regardless of the era. Notably, in 1929 and again in 1999, investors thought the good times were boundless and assets would keep going up, up, and up. They were spectacularly wrong.

And today? Only at the peak of those two infamous bubbles has the S&P 500’s valuation been higher as a multiple of earnings gauged over a 10-year cycle. And it’s not just growth investors who are embracing undue risk.

Income investors desperate for higher yields are growing more reckless, as they snap up an increasing number of junk bonds and exotic investments with unsustainable pay outs. Particularly troubling is the recent emergence of bonds issued by Iraq, Jordan, Greece, Argentina, and Ukraine at yields of about 7%.

The eagerness to buy debt from volatile countries, some of them still wracked by civil war, underscores just how far income investors will go these days to obtain a healthy yield. Income investors are going out on a limb, even when they don’t fully understand what they’re buying.

According to the Institute of International Finance, total global debt this year hit a record high of $217 trillion, representing 327% of the world’s gross domestic product. Global debt has risen by $50 trillion over the past decade, mostly fueled by the growth of general government debt.

In remarks to the press this week, German Finance Minister Wolfgang Schäuble warned that unstable government debt could spark another crisis similar to the meltdown in 2008. 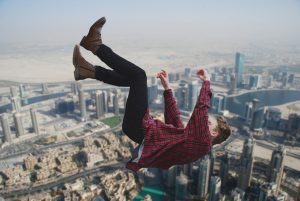 I’m reminded of a Wall Street parable. A man fell off the roof of a high-rise building. At each floor on his way to the pavement, he’d exclaim: “So far, so good!”

Yes, the bull market still lives. But the laws of gravity haven’t been repealed and a painful moment of reckoning awaits. With asset prices hovering at lofty valuations, several potential crash triggers wait in the wings, among them the ticking debt bomb overseas.

Consider yourself warned: Rising interest rates combined with a market correction will devastate scores of overly leveraged, slow-growth companies with high dividends that are unsustainable.

During uncertain times such as these, investors often behave irrationally and let emotions cloud their judgment. The key to generating growth and income (and protecting the wealth you already have) is keeping a cool head and focusing on the trends that really matter.

While economic growth has remained resilient, it’s still modest by the historical standards of recoveries. The markets are in need of a catalyst to justify sky-high valuations. Traders have been looking to Washington, DC for a shot of adrenaline, but they’re likely to be disappointed.

Team Trump has turned its sights to tax reform, but Wall Street is asking: can Trump deliver on any of his promises? Trump sold himself as the consummate practitioner of the “art of the deal,” but after the ugly demise of Graham-Cassidy (aka Trumpcare) last month, investors aren’t so sure. Trump’s tax bill already is encountering stiff opposition, even within his own party. The suggestion this week by an influential GOP senator that Trump is unfit for office doesn’t help prospects for legislative action.

1) Make sure you’ve implemented a proven inflation hedge, such as gold and other previous metals. Inflation currently runs below the Fed’s target of 2%, but the data could be sending a false signal. The following allocations make sense in today’s unpredictable climate (see pie chart). 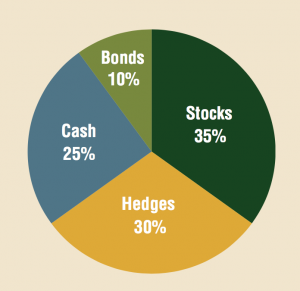 3) Seek diversification. In particular, gain exposure to real estate investment trusts (REITs) and utilities. To be sure, these high-dividend investments are vulnerable to rising rates, but they’re also cyclical and enjoy tailwinds from economic growth. That makes them more resilient in today’s conditions than many other high-income choices.

4) Consider dividend payers outside the conventional basket of income stocks, such as technology equities. Many Silicon Valley blue chips have evolved from fast-growth rocket stocks to Steady-Eddie dividend payers that can withstand higher interest rates and economic volatility. The same is true of health care stocks with brand name services and products that boast pricing power.

5) Supplement your stock portfolio with conservative options strategies. Options can be used in a methodical way to generate additional income at relatively low risk, regardless of interest rate movements or economic cycles. (I’ll delve deeper into options for income in future issues.)