All of these shifts have implications for investors, but it was the projections on the U.S. shale boom that garnered most of the headlines.

On the other side of that argument are those who either believe shale oil production can’t rise much more before peaking, or that electric vehicles (EVs) will grow rapidly enough that additional oil production won’t be needed.

The Argument for Energy Independence

In response to the IEA report, last week I published a pair of articles in the Wall Street Journal and Forbes that took the position that the U.S. can achieve energy independence. But, it depends on how energy independence is defined. There are also several important caveats.

I won’t recreate all of the arguments here, but I will link them for readers who want to drill deeper into the subject.

The Wall Street Journal article is: Is the U.S. On Track for Energy Independence? In that article, I defined energy independence:

“Our level of energy dependence is a function of much oil we consume versus how much we produce. Energy independence would be achieved if the amount of petroleum products we consume is equal to or less than what we produce.”

The Forbes article — Is U.S. Energy Independence In Sight? — is more focused on numbers and trends.

In 2005 I was asked whether the U.S. could achieve energy independence. I basically answered that there was a near zero percent chance of that.

At that time, U.S. net imports of crude oil and finished products like gasoline had reached a record 12.5 million barrels per day (BPD). U.S. energy dependence had never been higher, and the outlook was for more of the same.

I then proceeded to watch U.S. shale oil ramp up rapidly over the next decade. U.S. refineries started exporting finished products and U.S. net imports fell by nearly 8 million BPD. My certainty began to waver year after year.

Anyone predicting such a sharp decline would have been laughed at in 2005. Yet that’s exactly what happened. So, I have learned to be careful about what I declare to be impossible. I think it’s preferable to outline scenarios and apply caveats.

Oil production doesn’t occur in a vacuum. Capital investments are made on the basis of the outlook for oil prices. An outlook for higher prices will lead to greater access to capital markets, and a higher level of capital spending.

But the IEA believes the surge of U.S. production will keep oil prices in check. An outlook for low oil prices will discourage capital spending. It will also tighten up credit for the oil producers.

History is full of examples of certain projections for oil prices that turned out to be 100% wrong. Perhaps the most famous example is the 1999 cover story of The Economist that projected the “new normal” for oil would be $5-$10/bbl: 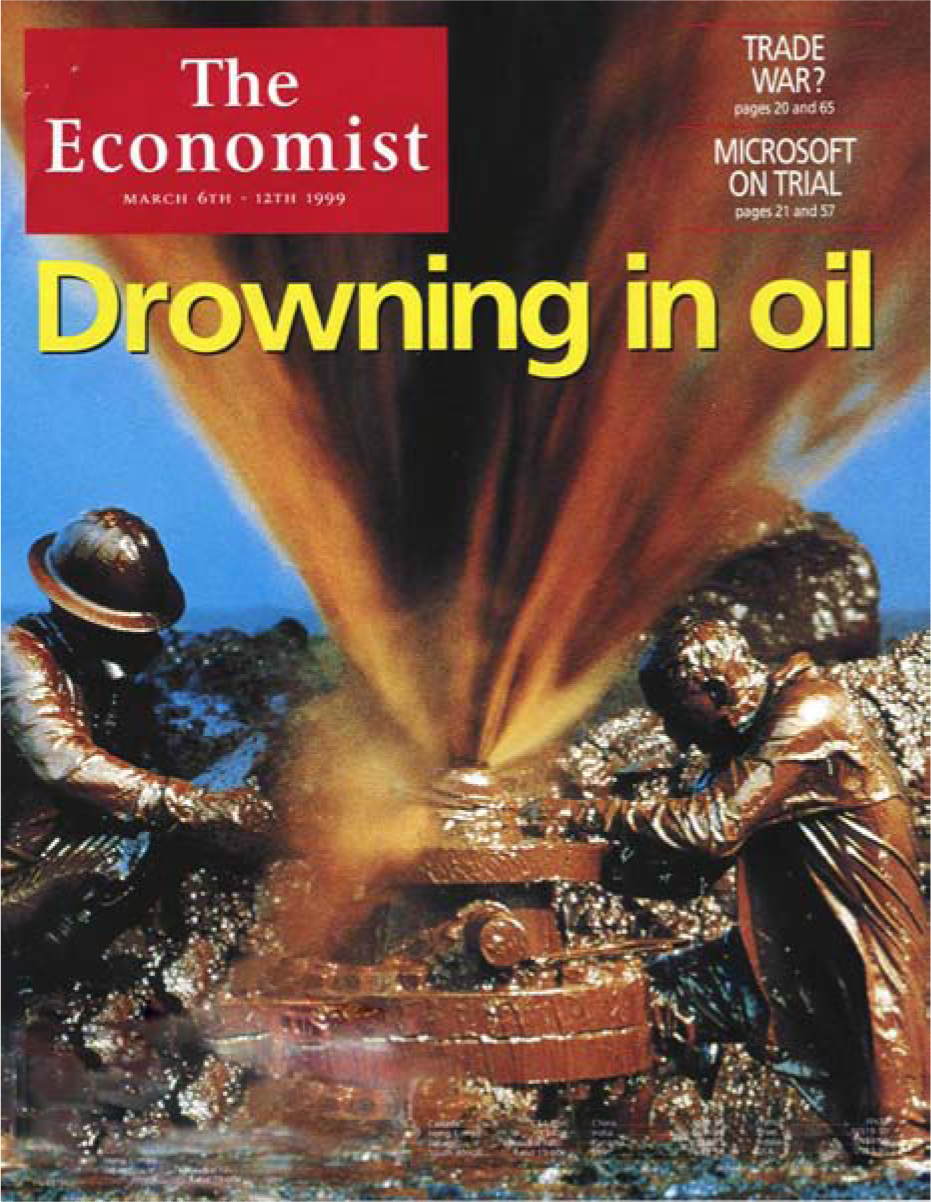 Underinvestment followed over the next few years, and by 2005 there were shortages that would ultimately drive prices well above $100/bbl. Thus, if enough oil companies accept the projection by the IEA of low oil prices, the result could be just the opposite.

Meanwhile, U.S. oil producers are exploiting the sweetest spots in the shale plays first. Over time, those sweet spots will deplete, and production will have to move to spots with poorer returns.

The implications are that unless oil prices rise, shale oil production growth will stall. We saw that in 2015 when oil prices crashed. Production retreated from the marginal areas, and U.S. production declined for the first time since the shale boom started.

A return to $50/bbl oil in 2017 has caused production to bounce back. Over the past 12 months, oil production has risen by nearly one million BPD. But that growth rate can’t be maintained unless oil prices rise.

I would conclude that even if shale oil production enables us to achieve energy independence, it will likely be fleeting. In other words, had we reached zero net imports by 2019, we would still be facing a shale oil peak at some point. Then, the U.S. would once again start to become dependent on foreign producers for our oil.

The only way around that is if oil demand can be curbed. This could be achieved, in theory, by a shift to electric vehicles, more fuel-efficient vehicles, and widespread adoption of ride-sharing.

Could that happen? I don’t foresee it for at least a decade, but now I know not to say “never.”