Wall Street Gets its Groove Back; Tech Pushes Markets Higher

For Wall Street, mounting risks are simply more bricks in the “wall of worry.”

Traders put aside anxieties over Washington. They’re not worrying about government shutdowns. Nor about war overseas. They’re focusing on positive data. Job growth and earnings have been strong. Tax cuts are in sight.

After selling off in recent days, the Nasdaq returned to its winning ways. Small-cap tech stocks showed the most mojo.

Health stocks also soared Thursday. Data show the sector’s growth will continue in 2018. The sectors posting the biggest gains on Thursday were health, retail and technology. Transportation was a laggard.

Another concern is tensions with North Korea. The nation warned Thursday that President Trump’s threats make war inevitable. To be clear, North Korea was referring to a nuclear conflict, not a conventional one. China urged calm. Investors shrugged.

Investors even yawned at the potential of a federal government shutdown. Nothing could knock Wall Street out of its groove Thursday.

Tax overhaul is the trump card, so to speak. Corporate America wins big from tax cuts. Shareholders face a bonanza. The middle class? Not so much. Voters won’t be happy when they discover they’ve lost their mortgage interest deduction. Homebuilder stocks are getting clobbered. Also on the chopping block is the deduction for state and local taxes.

But average Americans also are benefiting from job growth. Unemployment is at 4.1% and it’s on track to fall below 4%. Wages are rising too. The GOP promises that the tax bill will keep growth humming.

Analysts expect the Labor Department to release a solid job report on Friday. The University of Michigan’s Consumer Sentiment Index also is due Friday. Consumer sentiment numbers should be strong, a boon for holiday shopping. 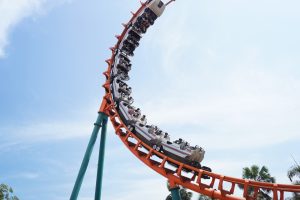 Also on deck Friday: the Baker-Hughes rig count. Production cuts are propelling energy prices. The rig count is expected to be higher.

In the topsy-turvy energy sector, the list of unknowns concerning oil prices remains a long one.

Has the price per barrel hit bottom? Is the rally from historic lows sustainable? Can OPEC enforce its production curbs? How long will the glut last? Is economic growth strong enough to keep oil prices from crashing again? Could conflict on the Korean peninsula derail the oil price rebound?

Volatility has been low in the broad markets. But the price of oil has been on a roller coaster ride. Down, up. Down, up. It’s enough to make investors reach for the Dramamine.

Drillers continue to suffer. They took on a lot of debt during the last oil boom. They’re having trouble paying it back. But investors are optimistic that economic growth will make a dent in excess oil inventories. Supply and demand is reaching balance.

The Trump tax bill is a big win for the energy industry. One notable win is the opening of the Arctic National Wildlife Refuge. Energy firms are thrilled. Environmentalists are livid. Take a guess who’ll win.

“China has a lot of debt. Could this debt trigger a market crash?” — Tom F.

In a word, yes. The International Monetary Fund (IMF) warned Wednesday that China could set off a global financial crisis. Think 2008.

The IMF reported that credit in China is high by international levels. Corporate debt has mushroomed. So has personal debt. The IMF pegs China’s troubled credit at over $5 trillion. That’s half of the country’s annual gross domestic product (GDP).

China took on debt to stimulate its economy. It spent billions on infrastructure. Many projects were wasteful.

The result? Bridges to nowhere. Vacant skyscrapers. “Zombie” companies. These loans are souring. If the debt bomb explodes, it could spark contagion.

On more and more international issues, China is the adult in the room. It’s the peacemaker between the U.S. and North Korea. It’s funding development in emerging nations. It’s taking the lead in new technologies to curb pollution. Its GDP growth rate is twice that of the U.S. (6% versus 3%). As goes China, so go world markets.

What do you view as potential crash triggers? North Korea’s saber-rattling? China’s debt bomb? Something else? Share your views: mailbag@investingdaily.com