Rosy Data Give Rx to Markets, Put Health Stocks in the Pink

The Federal Reserve kicked off its two-day meeting Tuesday, amid a backdrop of positive economic data. Traders expect the Fed to announce a modest rate hike on Wednesday. The central bank’s gentle tapping of the brakes confirms the economy’s strength.

The Dow and S&P 500 closed higher on Tuesday. The Nasdaq fell as traders pocketed gains in pricey tech shares.

The top performing sector on Tuesday was health services. Booming demand for medical care and drugs will be a dominant theme in 2018.

Consolidation is driving the outperformance of health stocks. Giant players seek economies of scale. Mergers pave the way for integration, which in turn creates efficiency.

This month, retail drug chain CVS Health (NYSE: CVS) announced it would pay $69 billion to buy health insurer Aetna (NYSE: AET). The deal is due to close in the second half of 2018.

UnitedHealth (NYSE: UNH), the biggest insurer in the U.S., announced this month that it’s buying the DaVita Medical Group unit from kidney dialysis firm DaVita (NYSE: DVA) for $4.9 billion. UNH would get 300 clinics, allowing it to directly administer care.

Health care administration is exploding. The U.S. Department of Health and Human Services (HHS) estimates that health administrative costs in the U.S. will reach $315 billion in 2018, up from $160 billion in 2013. These costs currently consume 7% of the health care dollar (see chart). HHS expects this percentage to hit double digits by the end of the decade. 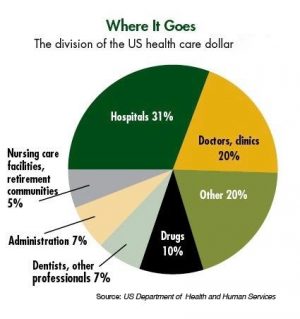 Amazon (NSDQ: AMZN) is the wild card. The e-commerce giant might enter the prescription drug business.

But analysts who get excited about AMZN entering the drug business are downplaying a big obstacle: regulations. Oversight of drugs is complex. Amazon would need approval from the U.S. Food and Drug Administration. Many states also require drug licenses.

Meanwhile, Congress on Tuesday continued work on its tax bill. To pay for corporate tax cuts, the legislation could result in cuts to Medicare and Medicaid. This concerns some analysts, but it shouldn’t.

Medicare and Medicaid are cash cows for many health and drug firms. Lobbyists have shareholders to protect. Health sector growth is unstoppable.

Research group Commonwealth Fund reports that Americans spend $9,523 per person a year on medical expenses, by far the most of any developed country. Spending in the U.S. on health care exceeds $3 trillion a year.

“Is a recession around the corner? What’s your prediction? Recoveries usually last about eight years. This recovery started in the spring of 2009. Aren’t we overdue for an economic slowdown? What will happen in 2018? I’d like to prepare.” — Paul L.

This is the time of year for analysts to make “year ahead” predictions. Take these forecasts with a grain of salt.

Remember how the pundits said Hillary Clinton couldn’t lose? They also said the markets would tank if Trump won. Wrong on both counts.

And yet, you must guard against unforeseen risk. I think a correction is coming. I also think an economic downturn will soon occur. But trying to time such events is a great way to lose money.

Indicators are positive. The economy is humming. Stocks are setting records. The bulls are in charge.

This week, we’ll likely see more signs that the economy is getting stronger, not poised on a cliff’s edge. Keep an eye on Thursday, when reports are due on jobless claims, retail sales, and consumer sentiment. The data is expected to be encouraging.

How can you prepare for the future? You don’t need to be psychic. Follow the allocations recommended by our flagship publication Personal Finance: 35% stocks, 30% hedges, 25% cash, and 10% bonds. These guidelines should provide your portfolio with a buffer against the dangers ahead.

What are your investment worries? Get them off your chest: mailbag@investingdaily.com