Tax Euphoria Lifts Markets, but China Looms on the Horizon

Investors are downright giddy about corporate tax cuts. Average taxpayers? Less so. They stand to lose a lot of deductions they have taken for granted. But the prospect of steep cuts in business taxes propelled the broad equity markets to new highs on Monday.

The Senate vote is set for Tuesday. President Donald Trump is expected to sign the bill into law by the end of the week. With the legislative finish line in sight, the three major indices sharply rose.

A flurry of corporate deal-making also buoyed stocks. Tax overhaul should result in cash repatriation, a boon for mergers and acquisitions.

But a dark cloud looms over this otherwise sunny horizon: China. Tensions between America and China just took a turn for the worse.

On Monday, President Trump officially labeled China a strategic “competitor.” The description was included in his national security blueprint. In the document released Monday, the White House accused Beijing of maintaining a “repressive vision.” It also charged the Middle Kingdom with pursuing policies of economic aggression against the U.S. The president hinted at retaliation.

More empty rhetoric? Perhaps. But the fact remains, China is moving away from the use of “soft power.” The country has been flexing its sharp muscles. That’s making its Asian neighbors nervous. If you’re worried about a trigger for a correction in 2018, China could be it.

President Xi Jinping has called for China to “turn up” its presence on the world stage. Recent events bear out his policy.

China closed the bridge linking a major Chinese city to North Korea. A large amount of North Korea’s trade with the outside world travels across this bridge. China said the closure was for repairs, but the real goal is to bring North Korea to heel.

China has built military bases on artificial islands in the South China Sea. The sea is rich in natural resources and subject to territorial disputes. China also has sent naval vessels on exercises with Russia.

Perhaps most worrisome of all, China is taking measures toward creating a new reserve currency that will include a role for gold. The move probably will start in early 2018, when China initiates an Eastern oil benchmark. At first, the oil futures contracts will be traded in yuan, which will be backed by gold as China lifts existing restrictions on exporting gold.

The race to be number one… 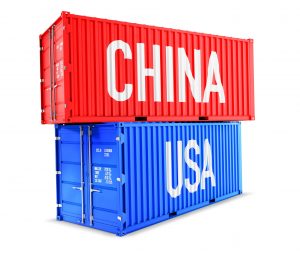 These actions by China directly challenge the global economic primacy of the United States. The lesson of history is clear: when a rising power challenges the incumbent one, the usual result is war. In this case, we’re talking about a trade war and not a shooting one. But it would be destructive.

China is integrated into Western political, social and economic life. That makes America vulnerable to Chinese pressure. More of this pressure is sure to come in 2018.

At the same time, China is marketing itself as a responsible global power. At international gatherings, Xi Jinping portrays himself as the adult in the room. Witness his recent embrace of climate change accords that were rejected by Trump. But Mr. Xi harbors soaring ambitions for the world’s second-largest economy.

Indeed, the most likely source of risk right now is in Asia. The Korean peninsula stands out. North Korea has been rattling its nuclear saber. Harsh responses from the U.S. heighten the danger. Diplomacy is in short supply on either side. The White House’s hawkish stance will prove a wild card in 2018.

Trump’s “America First” policy is prompting the U.S. to retreat from international agreements. China is rushing into the leadership vacuum.

High debt in overseas countries is another worry. China sits on a staggering amount of debt. Many of these loans are turning sour. Troubled European Union countries such as Italy also grapple with debt woes. A major bank failure could start a “domino effect” and global contagion. Potential catastrophes in the strife-torn countries of Brazil and Venezuela also pose threats.

The boom-bust cycle kicks in every 10 years. The last bust started in 2008. Do the arithmetic. We’re due.

So, enjoy the gains you’ve racked up in 2017. But as a dangerous 2018 approaches, keep your powder dry. Tax cuts can only carry the stock market so far.

Crude appears to be on a course higher. Saudi Arabia’s sale of a 5% interest in its state-owned oil business should boost the price of crude. The House of Saud wants a good price for its IPO, which motivates them to keep prices high.

Economic sanctions against Russia and OPEC production cuts are other bullish factors for oil prices. Add continued economic growth and depleting inventories to the equation.

OPEC recently extended crude production curbs through the end of 2018. If the cartel can keep its members in line, oil prices should move steadily higher as inventories shrink.

Where do you see oil prices heading in 2018? Share your views (or questions) about crude: mailbag@investingdaily.com