Santa Makes an Early Stop at Broad and Wall

Christmas came in advance to the trading desks of lower Manhattan. Congress on Wednesday applied the finishing touches to its $1.5 trillion tax bill. The legislation now moves to President Trump for his signature.

Major indices closed Wednesday with slight losses. After several days of record highs, investors pocketed gains. But Wall Street is pleased with the GOP tax bill. It got everything it asked for — and then some. The centerpiece of the bill is a major reduction in the corporate tax rate. The bill is Trump’s first big legislative victory. The GOP’s big donors are thrilled, too.

Traders have pushed stocks higher all year in anticipation of this moment. The S&P 500 has generated a total return of more than 20% so far in 2017. The bull market is the second-longest in history.

As we approach 2018, is the picture all cloudless sky? Nope.

Let’s put aside high valuations. We’ve beaten that horse to death. You don’t need to be reminded that stocks are overpriced. But you should worry that the Federal Reserve is playing Scrooge.

As for the complex tax bill, a phrase comes to mind: “There are known unknowns.” That’s what Secretary of Defense Donald Rumsfeld said in 2002 about the lack of evidence linking Iraq with weapons of mass destruction.

Will companies use their tax savings to create jobs? Will tax cuts stimulate the economy? Will curbs on the mortgage interest deduction hurt the housing industry? All unknowns.

Analysts are divided. Some argue that tax cuts stimulate growth. Others argue that “trickle down” theory is a bunch hooey. We’re about to see who’s right.

One thing is clear: corporations will reap a bonanza. Anticipation of these cash infusions has buoyed markets all year.

But according to the Tax Policy Center, the bill would raise taxes on 53% of Americans by 2027. How will working and middle-class Americans react to losing deductions to pay for corporate tax cuts? Unknown. Congress will find out at the mid-term elections. Polls show that the tax bill is extremely unpopular.

The media have paid scant attention to key aspects of tax overhaul. In future issues of Mind Over Markets, I’ll spotlight those details. I’ll pinpoint the winners and losers.

Worried about the tax bill? You should be. But why should the “big boys” on Wall Street get all the spoils? After the dust settles over the bill’s final provisions, I’ll do more than show you how to survive tax overhaul. I’ll show you how to profit from it. 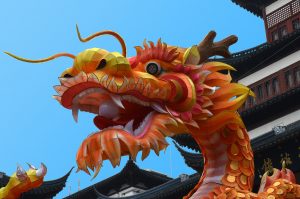 Another “known unknown” is China. The red dragon is spreading its wings.

This year, the feared trade war with Red China, Inc. never materialized. That probably will change next year.

The White House this week made noises about confronting China. Trump cut slack to President Xi Jinping in 2017, hoping Mr. Xi would pressure North Korea into conciliation. It didn’t happened. Trump is losing patience with both China and its ally North Korea.

The laws of economic cycles also indicate that a downturn is in the cards. Add tax upheaval and a trade war to the mix and investors could face a tough 2018.

The most extreme point for income inequality in the U.S. in the 20th century was 1928, thanks to a stock market boom. You know what happened in 1929. On the cusp of a new year, we are back at just such an extreme. In a recent research report, JPMorgan Funds warned that fiscal stimulus like the big corporate tax cut could fuel huge bubbles in a range of assets.

The younger traders who toil at the intersection of Broad and Wall are personally familiar with only a bull market. They started their careers during economic expansion. They never lived through a severe downturn. But the seeds of crashes are planted by the lack of historical perspective. Naïve investors are often shocked — shocked! — when they discover that stocks also go down.

Looking for one sector with tailwinds no matter what happens in Washington? Look no further than health care. As politicians play games with the tax code, you should look for industries that enjoy unstoppable trends. Health care fits the bill. Populations around the world are aging; that will drive demand for health care for decades.

Analysts give thumbs down to construction firm’s merger.

“What’s your opinion of the drone industry as an investment opportunity?” — Bill C.

The Pentagon is using drones to watch the enemy. These drones kill the enemy, too. Police forces also use drones for surveillance.

The Coast Guard, Customs, and Border Patrol are the biggest growth drivers for the drone industry. Commercial uses include crop spraying, pipeline patrol, moviemaking… you name it. The potential applications of drones are vast.

Drones project military power around the world. They’re dotting the skies over Afghanistan. CIA planners deploy drones to fight terrorism. Demand for drones is expected to explode in 2018.

Questions about the hottest opportunities in aviation? Or in any sector? Drop me a line: mailbag@investingdaily.com