Break Out the Champagne: Traders Eye a Bubbly 2018

It’s not quite New Year’s Eve yet, but Wall Street wants to get the party started. Traders are looking ahead to 2018 and they like what they see. Positive economic data and the prospect of tax cuts pushed stocks higher Thursday.

The major indices closed in the green after data showed the U.S. economy in the third quarter grew at its fastest pace in more than two years. Corporate tax cuts passed by Congress this week also buoyed investor sentiment.

Investors are trying to sort out the winners and losers of tax overhaul. The bill was rushed so quickly through Congress, many lawmakers admit that they didn’t even read it.

With or without tax cuts, the job market is holding firm. The Labor Department reported Thursday that the number of Americans filing for unemployment benefits increased more than expected last week. But the numbers show the country is near full employment.

Investors were relieved when Congress on Thursday advanced legislation to keep the federal government operating past Friday when funding expires. Wall Street hates uncertainty and few events breed uncertainty like a government shutdown. 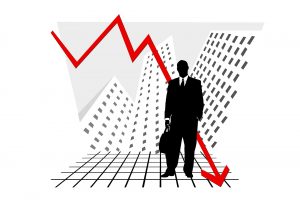 Bullish sentiment is off the charts. The yakkers on CNBC are hyperventilating about how stocks are going up up up. You’d think their coffee was spiked with amphetamines. But then again, these bozos aren’t really analysts. They’re circus performers.

If you want to lose money, follow the advice you hear on financial television.

Look, I’ve been observing the stock market for more than 30 years. I’ve seen my share of bull and bear markets, of booms and busts. Experience tells me to look askance at today’s exuberance.

When the stock market crashed in 1987, did you get burned? I sure did.

In 1987, I was working in midtown Manhattan as a financial writer. My employer was Venture magazine. We were a hot publication. Readership was soaring. So were ad dollars.

It was the era of insider trading. Ivan Boesky and Michael Milken were Masters of the Universe. Gordon Gekko was a cultural icon.

I sat in a window office that overlooked Fifth Avenue. I wore power suits with suspenders. I smoked absurdly expensive cigars. Thought I had it made. As the song goes: King of the hill, top of the heap.

But my world came crashing down in October 1987. The market crash drove Boesky and Milken into prison. It drove my employer into bankruptcy.

I was living in New York City, which ain’t cheap. I was suddenly out of a job. I had mouths to feed. My portfolio was crushed. I never forgot the lesson: Always keep your powder dry.

I eventually bounced back. So did the markets. But thirty years later, a new financial frenzy has taken hold. Caution should be your watchword.

Tax cuts won’t create nirvana. The windfall will flow to bottom lines and boost shareholder value. That much is good. But will companies use the extra cash for initiatives that drive organic growth?

We’re eight years into an economic expansion. That makes fiscal stimulus a gamble. Cutting taxes to encourage business spending implies that managers will bet on a longer economic cycle. But they might face a slowdown in 2018. When growth sputters, companies don’t hire. They don’t buy equipment. They lay off workers and curtail spending.

As Gordon Gekko says in the 1987 film Wall Street: “The public’s out there throwing darts at a board, sport. I don’t throw darts at a board.” Gekko was a villain but he also spoke sense.

Opportunities still exist in stocks. We’ve had a great 2017 and there’s money to be made in 2018. But at Investing Daily, we don’t throw darts at a board. We pick our spots and leave emotions at the door.

Utility experiences its own fire-related problems.

“Should I worry about inflation?” — Spencer B.

Inflation is running at a meager 1.9% and has been low for years. Investors are getting complacent. They’re forgetting how inflation can ravage their wealth. But consider this: after 20 years, inflation averaging the Federal Reserve’s target of 2% would slash a dollar’s buying power to 67 cents.

The Federal Reserve expects inflation to stay at its current rate in 2018. But wages are rising, unemployment is falling and economic growth is robust. Don’t get blindsided if inflation comes in higher than expected.

Keep at least 5%-10% of your assets in precious metals, such as gold and silver. They’re classic inflation hedges.

Questions about inflation? Drop me a line: mailbag@investingdaily.com